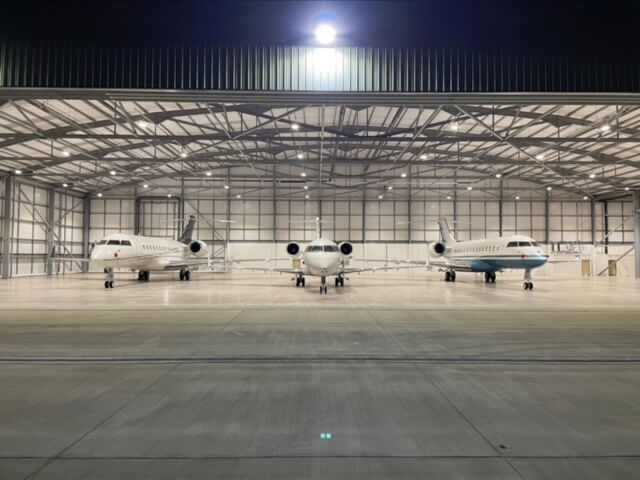 London Oxford Airport is stepping up its infrastructure projects to support its historic general aviation (light aircraft /pilot training) customers and its expanding commercial business aviation activity.  The latter experienced more growth in 2021 in percentage terms than other UK peer airports – up by almost 40% – with over 5,100 flights a year.  Flight training activity, meanwhile, is up nearly 50% compared with pre-pandemic levels in 2019.

The airport’s new 63,000 sqft (6,000m2) 140m long Hangar No.15, opened in October 2021, is almost full.   Another similar new hangar – No.16 is anticipated – and the airport is pleased to have finalised, just this month, an agreement to build a new aircraft maintenance and repair facility on the northeast corner of its site.  To be built to the specification of a major OEM, which will lease it, the facility will cover 14 acres/5.5 hectares.  It should be built within 24 months.

Investment has also been committed for the relocation and extension of Oxford’s northern taxiway. Involving a near £6m investment and eight months’ work, it will significantly speed up and handle aircraft movements on the ground more efficiently, especially on busy days when it’s not unusual to see 400 or more movements a day. More GA training aircraft will be able to do run-ups on the former crosswind runway, whilst all back-tracking will be eliminated on the main runway when the southern end (RWY 01) is in use.

“Business aviation, an important pillar of our business, will enjoy the OXF ‘Four Minute Mile’ from touchdown to driving off the airport estate (or vice-versa), on a much more frequent basis,” said the airport’s Head of Business Development James Dillon-Godfray, noting 30% of flights use the southern end.  “The relocation also allows for the re-development of the eastern zone for the anticipated evolution of the airport in the years to come,” he stated.

In recent onsite developments, several of the airport’s established tenants, including Up and Away Aviation and hullo Air Crew, have moved into a former CAE college building.  The airport’s management and administration team have also moved there, making way for a new pilots’ lounge to be built behind FBO OxfordJet’s reception, while the space underneath the control tower is to become a smart new facility for general aviation users.

“Our investors are wholeheartedly committed to our future as an airport,” highlighted Dillon-Godfray, including embracing emerging next-gen eVTOL, electric, hybrid/electric and alternative fuel technology programmes seeking a UK base.  “We are well placed and enthusiastic about hosting a broader and more diverse community,” he added.

On this theme, management is looking at power self-generation and battery storage technology, versus being fully dependent on the national grid, which has limits in capacity.  On-site solar power farms are also a consideration.  In the near term the airport would like to offer sustainable aviation fuel and be one of the first airports to offer SAF to helicopter users, the airport being co-owned with the London Heliport at Battersea.   One operator is about to trial SAF use on its corporate helicopter fleet already.

A new business park at the airport entrance is also being planned, Dillon-Godfray highlighted, reflecting interest from technology start-ups evolving from Oxford’s University and the airport’s close links and proximity with Formula 1 and automotive industries.

Supporting tenant Volare Aviation’s expansion, the airport has started work on a £1.7 million three-storey glass-fronted office block, of some 9,500 sq.ft., including a large aircraft spares storage facility, positioned at the end of Hangar No.14.  Work commenced late May.

Boeing BBJ to reside at Oxford Airport with Volare Aviation

Volare Aviation recently committed to the acquisition of a pre-owned Boeing BBJ which will be based at Oxford and be available for private charter.  The aircraft is due to arrive from Turkey in a few weeks’ time.  Volare, marking 10 years at Oxford Airport, offers a full suite of aviation services, from aircraft acquisition and sales, engineering, training, management and charter for both jets and helicopters.

“We don’t operate business jets anymore, we operate family jets,” said Dryden, who has run other companies from Oxford Airport for over 20 years.  “Two years ago, we managed four business jets for local Oxfordshire families.  Today, we have 31 aircraft under management – 14 are helicopters.  Only two are used solely for business reasons, yet all have been acquired for moving families around.  The majority of our clients are in the Cotswolds.

“Covid has reset the parameters and there is a huge dynamic shift about the social acceptability of owning or chartering a jet in the UK.  Moving from A to B is still challenging, even if you want to use an airline,” he said.