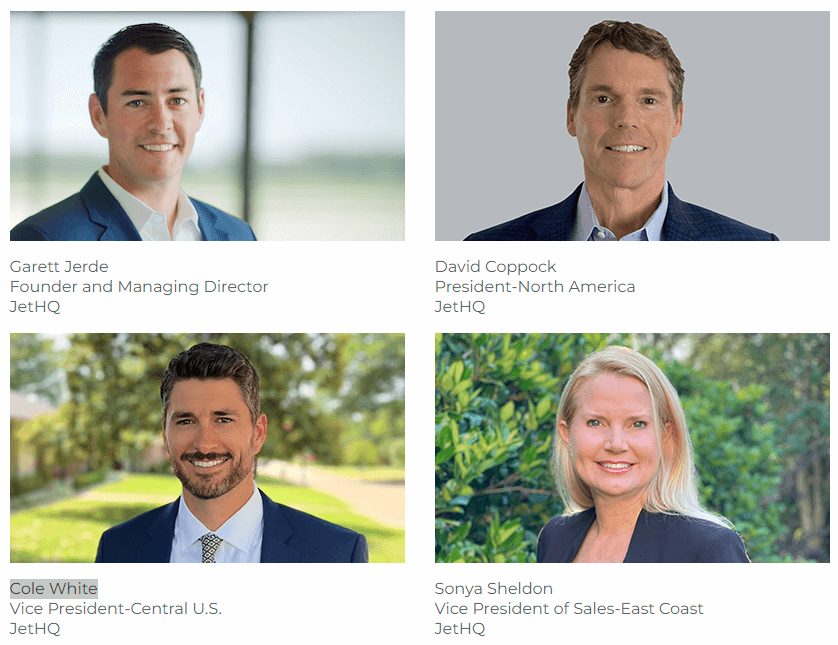 JetHQ, the aircraft transaction and brokerage company, has bolstered its sales team in North America and promoted a leader to head this new division.

JetHQ announces that David Coppock has been promoted to President-North America, after previously serving as Vice President of Sales.

The North America division of the company has been elevated to match JetHQ’s other regions, including Asia, EMEA (Europe, Middle East and Africa), and Latin America.

The company is bringing in two seasoned aviation professionals under Coppock to lead sales efforts within the U.S. Sonya Sheldon comes to JetHQ as its Vice President of Sales-East Coast and Cole White joins as Vice President-Central U.S.

“Coming off a record year, we’re continuing to grow to meet the marketplace’s demands, while still delivering the level of experience that’s unmatched in the sector,” said JetHQ Founder and Managing Director Garett Jerde.

“David has built a sales team that serves the needs of our clients, with Sonya and Cole bringing in diverse strengths and connections within business aviation.

“In building up this North America division, the company is poised to achieve more milestone goals as we start our second 10 years.”

A combat veteran with the U.S. Air Force and Air National Guard, Coppock had been focused on the western U.S. sales territory in his previous JetHQ position.

He came to the company after leadership roles with manufacturers Bombardier, Gulfstream and Hawker Beechcraft, as well as business development at Mente Group. He is based out of Phoenix.

Sheldon has spent her entire career in aviation, beginning as a corporate pilot, and then moving to Gulfstream as a flight test engineer.

She was most recently a Senior Sales Engineer, developing vast connections within business aviation.

She has also worked for a brokerage firm, directly dealing with aircraft transactions. She will work out of Savannah, Georgia.

At Mente, he developed strategy, worked aircraft transactions and did extensive fleet planning and market research.

Before entering the business world, White played baseball in the Pittsburgh Pirates organization. He will work out of the Dallas region.