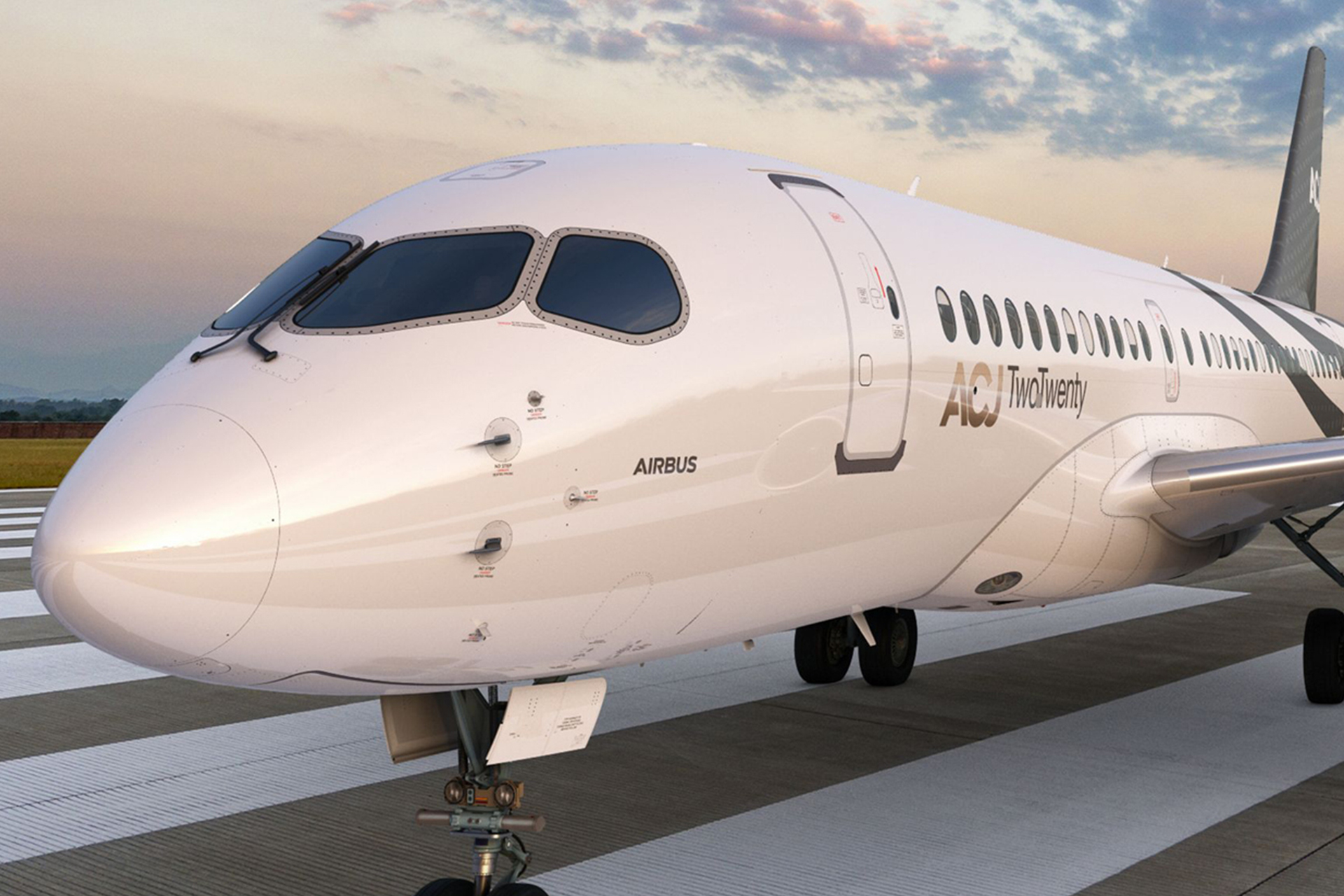 Between them, Benoit Defforge, President at ACJ, and Richard Gaona, Executive Chairman & CEO at Comlux, talk a convincing game for the dramatic new ACJ TwoTwenty

Even after almost 25 years of writing about it, the aviation industry has the capacity to take me by surprise. The year 2020 had so far been big on stories of resilience, adaptation and survival and, in too most cases, struggle. So, when Airbus Corporate Jets emailed late one evening, I automatically assumed the worst, as one inevitably does on spotting a favourite actor’s name trending on Twitter.

But the email led to a surprising call the following afternoon, with ACJ President Benoit Defforge and Richard Gaona, Executive Chairman & CEO at Comlux. Minutes before dial-in, an embargoed press release revealed this was actually a product launch; ACJ was taking the bold step of introducing an entirely new class of aircraft to the VIP market.

Over lunch in a Dubai hotel two years ago, I’d suggested to Defforge that the A220, then relatively new to the Airbus portfolio after its previous incarnation as the Bombardier CSeries, had the makings of a fine VIP aircraft. Without committing either way, he noted that the type was in the process of entering into the Airbus industrial system and it was too soon to make any decisions beyond its establishment in commercial service as an Airbus product.

Now, speaking as Airbus launched the ACJ TwoTwenty, Benoit Defforge recalled that conversation, admitting the A220 was already in ACJ’s sights and the process of realising a VIP machine based on the advanced airliner well under way. In launching the ACJ TwoTwenty, which it dubs ‘The Xtra Large Bizjet’, Airbus reckons it has created a new market segment with an aircraft that leverages the high technology base of the standard A220-100 regional airliner. It’s a bold statement describing an audacious move, especially in the midst of global pandemic. Why now?

New value proposition
Speaking on 5 October, Defforge explained: “We know the market well and identified the need for a new segment, a new value proposition. On top of that, we’ve seen that business aviation activity has been very resilient, back to around 90% around the world since the COVID situation began. And, finally, we’ve retained all our backlog and continued to sign new customers in 2020.”

Thinking back to our Dubai conversation, Defforge revealed that at the time, much work remained to be done on designing in the desired performance and developing a cabin concept for the ACJ TwoTwenty, although Airbus had begun exploring options for a VIP development as soon as it began working closely with Bombardier on the baseline aircraft. “We have continued to develop the A220 and we are working on a maintenance programme specifically for low utilisation, to optimise costs for our ACJ customers. To provide the range performance our customers require, the ACJ TwoTwenty has more fuel, in five additional centre tanks, and increased maximum take-off weight.”

Meanwhile, the aircraft’s cabin has been designed around what Defforge referred to as a ‘package’, essentially an extensive catalogue of options from which customers select options. “It makes for a flexible, comfortable cabin and when you combine that with the aircraft’s range, performance and operating costs, you see this is a fantastic platform.”

Airbus Corporate Jets chose to reveal the ACJ TwoTwenty alongside the type’s launch customer, Comlux. Offering charter, aircraft management, completions and a variety of other services, Comlux launched the ACJ TwoTwenty programme with orders for two aircraft, although Defforge was delighted to confirm that deals had already been struck for six aircraft in total. Comlux will exclusively complete the cabins of the first 15 ACJ TwoTwenty jets, which means nine additional airframes beyond the orders so far announced.

Comlux completion
Comlux has a long and proud relationship with ACJ and the company’s Richard Gaona said that with the ACJ TwoTwenty, he believes Comlux is investing in a product of considerable value. “Discussing the project with Benoit a few months ago, we became convinced of the aircraft’s position in a new market segment. It has a wide cabin, range and space, and the Airbus cabin renderings are quite amazing, Sylvain Mariat, ACJ’s Head of Cabin Design, did an exceptional job. And on top of that, the A220 is an extremely modern aircraft.”

Ironically, ACJ is not alone in defining an A220 bizjet solution in recent months, and Gaona explained a little more on why the aircraft’s cabin is ideal for VIP completion. “With a conventional business jet there aren’t too many options available but, along with Airbus, we’re able to offer clients more solutions for defining the ACJ TwoTwenty cabin. I wouldn’t say they are modular solutions rather, for the first time, that Airbus is selling fully completed aircraft.”

The A220 cabin is wide by design and in VIP applications can be made fractionally wider. It is also long, the two factors together creating a space similar to that of the ACJ319. Admittedly, the latter offers considerably greater range than the ACJ TwoTwenty, but many ACJ missions come nowhere near to exploiting the aircraft’s full reach. With the ACJ TwoTwenty offering similar cabin space in a more modern airframe, where does the ACJ319 fit into the portfolio?

“They are very complementary,” Defforge said. “With the concept we’ve been discussing, the ACJ TwoTwenty can be offered at a very attractive price with a cabin providing more than twice the space of a conventional business jet, and intercontinental range.

“If you look at today’s ACJ portfolio, we start at 70m2 and go all the way up to 300m2. That positions us across the business aviation industry – it’s the most complete portfolio available.” Talk with Defforge or listen to him speak about ACJ’s product line and you’ll not wait long before he proclaims that living space, providing the space to ‘live’ and move around on the longest flights, is among its key qualities. Now, Gaona reckons that concept is further refined with the ACJ TwoTwenty.

“I believe that connectivity in the ACJ TwoTwenty cabin will be among the major differences that make it stand out compared to other aircraft. It is equipped with a very advanced, fast internet system and everything in the cabin can be controlled by an iPhone. Passengers will be able to check the landing time on their phone, using information from the aircraft systems. And they’ll be able to watch their individual movie choices.”
Returning to the A220’s advantages by design, Gaona noted that the airliner’s large windows naturally make for a pleasant cabin environment. In ACJ TwoTwenty form, the aircraft gains a cabin humidification system, further improving the passenger experience, while Defforge added that ACJ has made other fundamental changes in the same vein. “The cabin altitude has been lowered compared to the airliner, down to a little less than 6,000ft, which we know offers a significant level of comfort. It’s similar to the ACJ350, which is designed for very long ranges.”

Unique performer
Even with its additional fuel, the ACJ TwoTwenty’s field performance remains impressive. “Landing and take-off performance are very similar to, and in some cases even better than, those of the Global 7500, for example,” Defforge confirmed.

Gaona continued: “You can operate this aircraft off a short runway, in competition with a conventional business jet, fly 12 hours plus, then land on a short runway, with much lower maintenance costs. We already have 20 ACJ aircraft and we know the company very well, but we discussed and checked the details of the ACJ TwoTwenty’s performance and maintenance costs very carefully before we entered into the agreement with Airbus. As an operator, I can confirm that ACJ TwoTwenty maintenance costs are very competitive. That, combined with range and cabin comfort, can only be achieved by this aircraft.”

Comlux expects delivery of its first green ACJ TwoTwenty by December 2021 and Gaona anticipates completion taking around 14 months. “By the beginning of 2023 we’ll have the aircraft in service,” he said.

The concept of offering extensive choice from a ‘cabin catalogue’ likely means that for subsequent orders the time between contract signature and delivery will be shorter. “It’s a very interesting feature of this aircraft compared to the fully customised ACJ319 or 320,” Defforge added. “It’s part of our strategy for the ACJ TwoTwenty with Comlux. It’s important for us to achieve product visibility, favourable lead times and quality. The resulting aircraft offers the best value for money and the best quality, on time.”