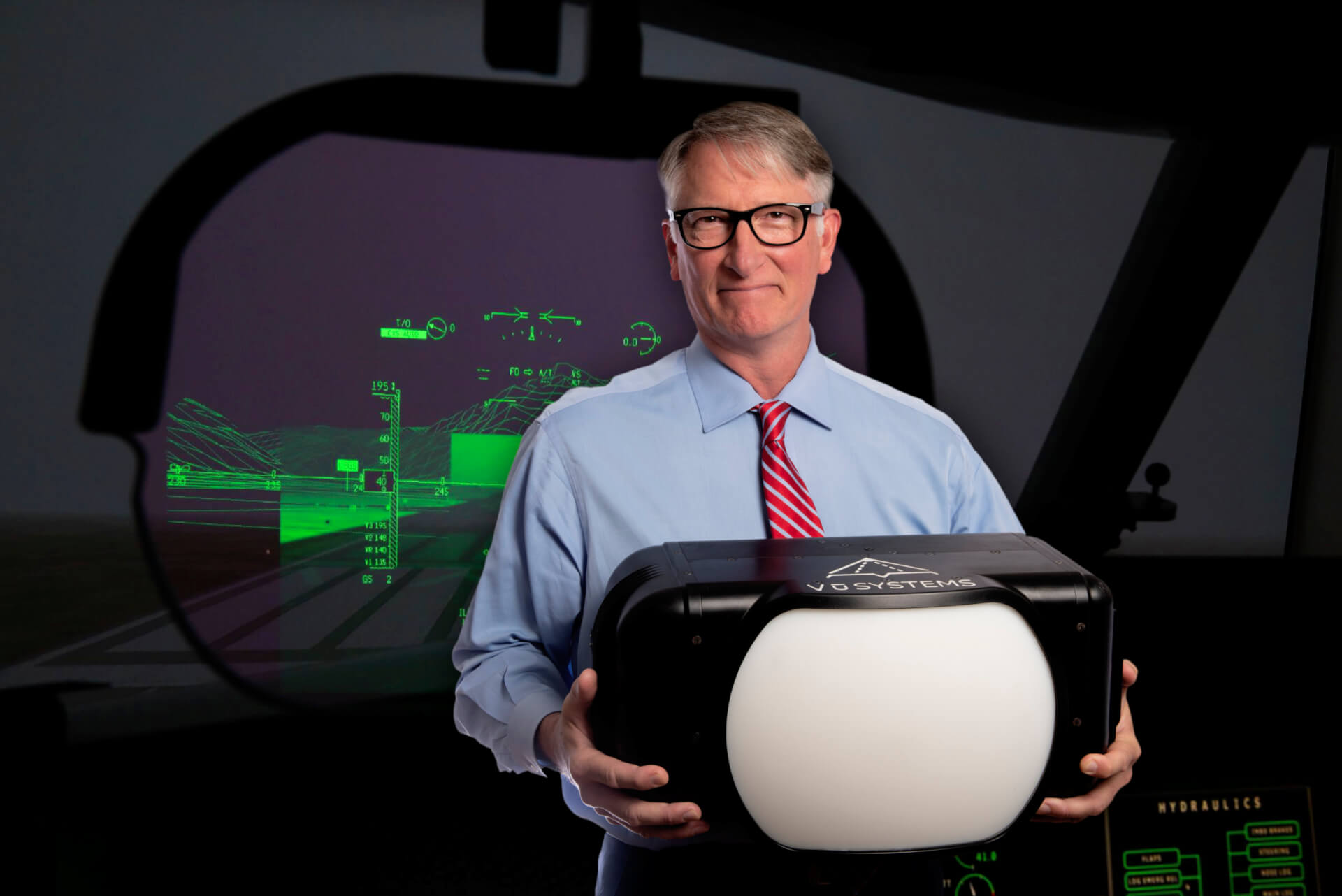 Saab flew its J 21R prototype for the first time in 1947. It was among the first jet fighters and, by extension therefore, also among the first successful jet aircraft of any kind. The Swedish company maintained its ascendency in aerospace production through a series of world-class combat aircraft, culminating in today’s superlative Gripen E/F. It is also partnering Boeing on the T-7A Red Hawk, the US Air Force’s new advanced jet trainer.

Along the way, Saab has developed deep expertise in avionics, sensors, flight control systems and communications, delivering high-end capability into civilian and military markets in the air, on land and at sea. In recent years, Saab has also been notable for the expansion of its remote air traffic control tower business, linking unmanned ATC at remote airfields to manned centres at major airports.

Vū Systems was founded in North Carolina in 2013, with ‘Vū’ meaning Visibility Unlimited. In 2015, it flight tested an initial prototype passive millimetre wave (PMMW) camera, proving its ability to ‘see through’ weather. Work continued to create the so-called Vū Cube sensor and after forging a strategic partnership with Saab, Vū Systems’ CEO Stedman Stevens was ready to reveal the PMMW technology as part of an Enhanced Flight Vision System (EFVS) at NBAA-BACE 2019.

The technology came as a surprise to many show visitors. Stevens says: “Vū Systems has been a quiet development, meaning complete secrecy. Keeping the programme and the product secret was done to help us stay focused on the product, while avoiding a premature product announcement.”

Presented as a major part of Saab’s showcase booth, the technology was immediately impressive, but the Swedish company’s is not the first name that springs to mind as a typical NBAA avionics exhibitor, so what brought the two organisations together? “Saab is unique as the only aircraft manufacturer that also owns an avionics company,” Stevens says. “Saab manufactures fighter jets today, and still supports the commercial aircraft it produced, the Saab 340 and Saab 2000 regional commuter aircraft.

“And it provides key avionics components for Airbus, Boeing and others, including flight controls and other systems. We were also naturally attracted to Saab as a key global partner because of its mastery of head-up displays, synthetic vision and aircraft flight deck avionics. As it turned out, Saab was also looking for a disruptive enhanced flight vision sensor that could do something no other device could – see through fog and clouds.”

The combination of Saab’s industrial might and aerospace expertise with Vū Systems’ unique technology is opening a new market to both companies, since no existing synthetic vision system (SVS) employs PMMW. Put simply, where visibility is reduced to zero because of dense fog, heavy precipitation, blown sand or dust, or even smoke, the PMMW sensor enables safe flight to touchdown without the requirement for extensive airport landing aids. It means aircraft equipped for RNAV and RNP will be able to continue for zero-visibility landings at smaller airports, avoiding diversions and missed schedules, and increasing safety.

But aren’t modern aircraft landing at modern, well-equipped airports already served by instrument landing system (ILS) and other navigation aids? In some cases yes, but much less so than one might expect, as Stevens explains.

“The problem of blind flying is as old as aviation itself. Most air travellers and operators have experienced weather-related delays at the airport, cancelled flights, lost days and costs to business, all of them an unfortune part of air travel. Aviation technology has not advanced or improved to address this issue. Why?

“One answer is that the consumer is not demanding it or aware of the situation. Most consumers think every aircraft has radar and tracks the location of all other aircraft; it’s a far cry from reality and also from the 1947 ILS technology we still fly with today. Another myth is that most consumers think all planes can land automatically in bad weather and that is just not true.

“In fact, aircraft can only autoland at about 110 runway ends in the US. This very limited use of autoland technology, where the pilot relies completely on the technology to land the airplane, compares with our solution, which puts the pilot back in the technology loop. It enhances their performance in the same way that reading glasses help us see; it’s a proper use of technology to solve the problem of seeing through the clouds.

“Running into the myth vs reality of aviation over and over again led to our idea of developing a camera that could see through fog rather than have the pilot continuing to fly blind. When a pilot can see, the level of automation and equipment on the ground at the airport can be greatly reduced, creating access to many more airports.”

Synthetic vision systems typically employ sensors detecting natural infrared (IR) radiation invisible to the naked eye, using it to generate a video image for viewing on a head-down display and/or for projection into a head-up display (HUD). Infrared is easily understood as heat, or thermal energy, and differences in emissivity between materials, essentially the way they release IR, produces a contrast between them. There will always be a difference between one surface and another, even in cold temperatures, and IR cameras use this difference, or contrast, in IR emissions, to produce images.

Regular optical cameras produce photographic images or video in exactly the same way, but by detecting light within the spectrum visible to human eyes. An IR-equipped SVS is able to generate detailed images when there is insufficient ambient light for pilots to see, producing an image of the outside world that enables safe navigation and landing, but without the colours of visible light. IR is therefore extremely useful in darkness and when visibility is reduced, but is unable to penetrate dense fog, heavy precipitation, or dust, sand or smoke. Landing under such conditions therefore requires an airfield equipped with Category II/III landing aids and, even then, operating procedures might prevent pilots ever reaching an acceptable decision height at which they can see the runway.

Vū Cube changes that. Just as objects naturally emit light and IR radiation, so they also emit millimetre wave radiation. It occurs at wavelengths longer than those of IR, typically between 1 and 10mm, and lower frequencies in the extremely high frequency (30 to 300GHz) band. Millimetre-wave radiation is typically blocked by raindrops, for example, which are of a similar size to its longer wavelengths. However, at its higher frequencies, its shorter wavelengths enable it to penetrate precipitation, albeit over relatively short ranges. It is this quality that Vū Systems is exploiting. Significantly, there is also a distinct contrast between the levels of MMW emitted from the sky and, for example, a runway surface, regardless of ambient conditions.

Its lower frequency compared to IR means that MMW produces a less detailed image. Nonetheless, with computer enhancement the resolution is sufficient to define landscape features, buildings and other structures and, crucially, the runway threshold and associated detail. Vū Systems is confident in specifying a range of two nautical miles, but trials have shown its ability over twice that distance.

MMW really comes into play in combination with other sensors, which is where Saab comes in, combining Vū Cube with its SVS to generate EFVS. But that’s not all. The Saab-Vū EFVS combines visuals from PMMW, infrared, synthetic vision and other sensors to generate imagery that may be displayed in front of the pilot on Saab’s high-performance HUD, itself based on technologies well proven in a variety of applications, including military transport aircraft.

The result is quite startling, especially since the Saab-Vū EFVS fully complies with the US FAR 91-176 FAA regulations introduced in March 2018 to enable aircraft equipped with qualified sensors to be granted permission to take-off and land in zero-visibility conditions. Currently the only system providing pilots with the level of vision required, the Saab-Vū EFVS sensor is almost ready for market. “Our schedule for product introduction and certification is mainly driven by our customers’ schedule,” Stevens confirms, “but we expect to see the system in service in the 2021 timeframe.”

Ironically, while the Saab-Vū EFVS is all about seeing safely across the two nautical miles or so ahead of the aircraft during landing and take-off, Saab also chose NBAA-BACE to announce a new aeronautical 3D terrain database solution, produced in partnership with Vricon, that expands to cover the entire globe. Providing 3D terrain and elevation data to a resolution previously unavailable commercially, it has application to the latest advanced avionics systems and flight decks, including synthetic vision systems, terrain awareness warning systems (TAWS) and digital moving maps. Saab is pursing EASA DAT Type 1 certification (equivalent to FAA LOA Type 1) and aims to have approval for the solution in 2020.

A US company, Vricon employs high quality commercial satellite imagery and its own software to generate 3D geodata, or terrain models. Imagery from multiple sources is combined, ensuring 0.5m resolution across a surface model of the entire Earth that forms the basis of Vricon’s product range.

Saab says: “The high-resolution 3D database provides superior global coverage, accuracy, integrity and continuity – including denied areas – compared to any digital terrain data solution on the market.” Aeronautical terrain databases have generally been based on decades-old Shuttle Radar Topography Mission (SRTM) data collected by NASA. Compared to the Vricon product, the SRTM data is obviously dated, but also lacks detail and resolution. And it is incomplete for many locations. Meeting minimum regulatory requirements today, it is inadequate for the increasingly robust requirements of the future.

Magnus Brege, Vricon’s CEO, says: “Vricon is very pleased to support Saab and help create the new aeronautical database solution. Through this partnership to support the business jet industry, Vricon’s products will reach a new set of clients, who will benefit from our world-class 3D data and greater assurance for flight operations worldwide.”