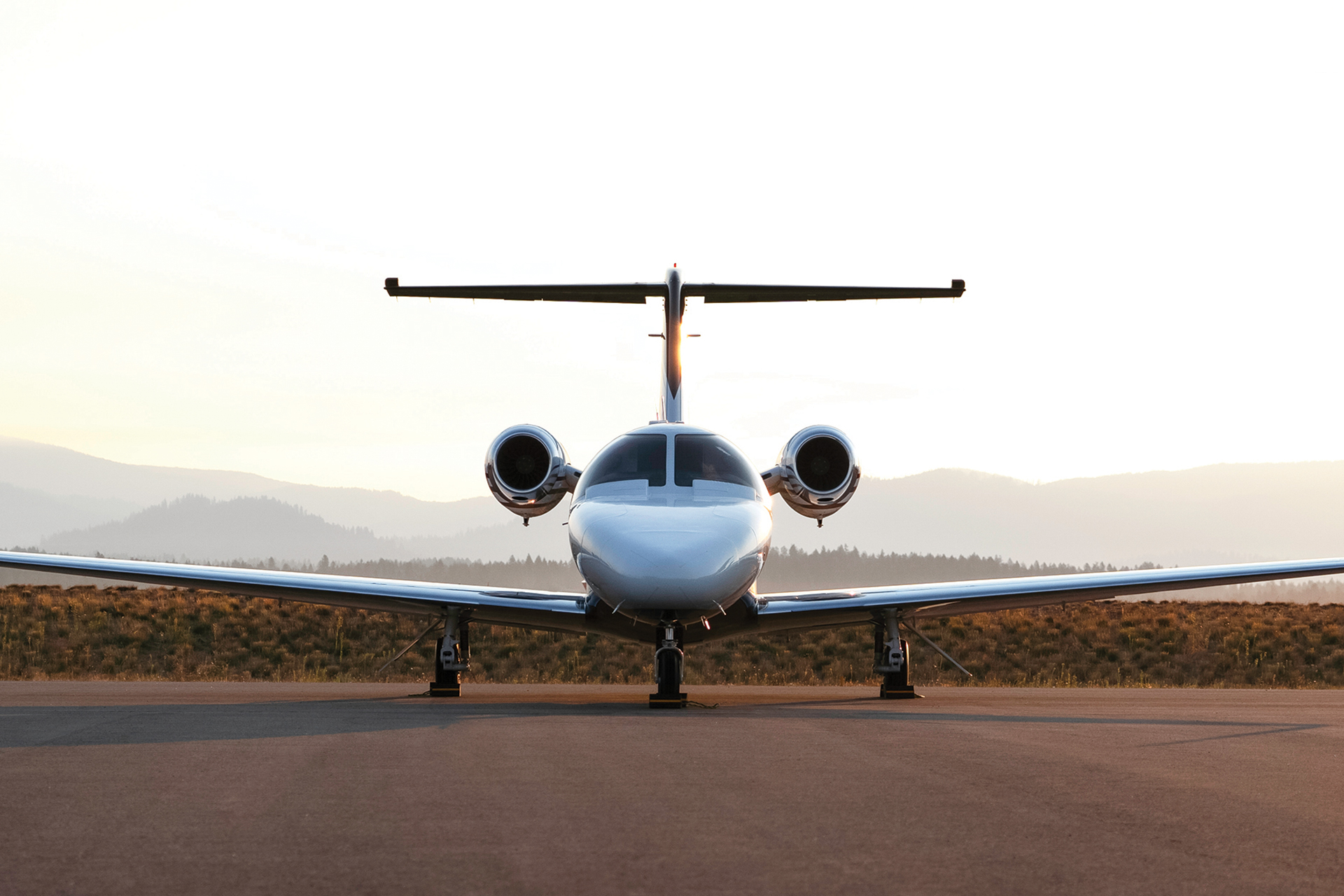 Tamarack’s Active Winglets are remarkable for their apparent simplicity and the performance gains they enable. Nicholas Guida, Founder & CEO, explains their benefits as the company opens a new Tamarack European Transformation Centre at the UK’s London Oxford Airport

If the EVA team’s hard work in the face of adversity has paid off, you should be reading these words more or less as Tamarack completes a second Active Winglet installation at its new Tamarack European Transformation Centre and soon after it announces the opening of the Tamarack East Coast Transformation Center at Aiken Regional Airport, South Carolina, during the NBAA’s VBACE event on 2 December.

On 27 October 2020, the Sandpoint, Idaho-headquartered company had announced the completion of work on a Sovereign Business Jets Citation CJ2 at the European Transformation Centre, with a Citation CJ1 expected to be ready in November. A CJ1 belonging to a private owner was also scheduled for work that same month.

These redeliveries of modified aircraft mark a significant milestone in Tamarack’s history. The company successfully emerged from voluntary bankruptcy in March 2020, after a well-documented period of struggle following EASA and FAA emergency airworthiness directives issued following upset incidents affecting a handful of modified CitationJets. Those difficult times are now behind the Tamarack team and seem to have done little to dent customer faith in the company.

Expansion is a key factor in the recovery process and having added to its authorised installation facilities in the US, Tamarack has turned its attention to Europe, where a small number of companies already offered the Active Winglet kit. The UK, in fact, had two dealers already, but Tamarack describes the London Oxford facility as a Transformation Centre. As Nick Guida explains, that’s something quite different.
“We’ve had great dealers for a while but we’re moving towards having our own shops, where we control the process from beginning to end. Having dealers is good, but I’ve always wanted to have just a few facilities bespoke for our product.” Customers using a Transformation Centre enjoy an experience as though they were visiting Tamarack headquarters and Guida draws attention to the new Aiken Regional Airport facility on the US east coast.

Active Winglets
Today, winglets have become so commonplace in service, on new-build and retrofitted business aircraft, airliners and even military airlifters, that they seldom warrant a second glance. Yet Tamarack’s Active Winglets are quite different to the norm. Whatever their configuration, traditional winglets require structural reinforcement of the outer wing, primarily to counter aerodynamic forces and wing bending generated by the winglet. The fuel saving provided by installing winglets compensates for the additional fuel burned carrying the reinforced structure, but the result is less than optimal.

Active Winglets add weight too, of course, around 79lb on a CJ, but the fuel required to carry that small increase is massively compensated for by the performance improvement. A CJ with Active Winglets might reasonably be expected to fly for between four and five hours on the same fuel that would provide three hours flying to an unmodified jet. It will also climb faster, reaching altitudes in initial cruise that a regular aircraft might achieve only towards the end of a flight, when it was light on fuel.
Tamarack counters wing bending using an active load alleviation system, embodied in two small control surfaces – Tamarack Active Camber Surfaces (TACS) – mounted inboard of the winglet. Installing the surfaces requires an extension in wing span, but its response to aerodynamic forces means a larger winglet may be fitted, with an inevitable increase in wing aspect ratio. This, combined with the well understood efficiencies of winglets, enables Tamarack to claim dramatic fuel savings, extending a CitationJet’s range by as much as 30%, depending on aircraft and mission profile.

And, because the installation process is relatively simple, downtime is minimised. With its first job completed to the customer’s satisfaction, the Oxford Transformation Centre was confident of bringing the time required for subsequent installations down to seven days. “The key,” Guida says, “is that the wing doesn’t need to be reinforced for stress or deflection – traditional winglets bend the wing more, so there’s often a need to modify ailerons and slats too. In some cases the upper wing skin has to be removed before the wing can be reinforced. The critical point for us is that we reduce the bending moments at critical loads, when the TACS pop up. That means there’s no structural reinforcement and we only go into the wing about six inches. So we can do this with one shift in seven working days, including paint.”

For all their efficiency, the Active Winglets also look fabulous. They are large, stylish additions to the jet and cry out for paint or a spectacular finish. Guida is confident in Tamarack’s ability to deliver that finish within the seven-day installation timetable. How? “We have a secret weapon. His name is Patrick,” he reveals. “He’s an artist foremost, then he got into aircraft painting and came to work with us. He’s excellent. As soon as we have a customer saying they’re interested, we start working with them and the results are incredible.”

Surprisingly, Active Winglet-modified aircraft require little if any addition to their regular maintenance programmes. “It’s all very traditional,” Guida says. “We have electromechanical actuators that are assessed on-condition, so if they’re OK they don’t need replacing; there’s nothing beyond a visual inspection. We may replace the actuators in our fleet leaders just so we can see how they’re doing, but we’ve already tested the actuators to seven lifetimes.”

U-2esque mystique
There is no question that Tamarack’s winglets look sensational. The extended wing span that comes with them also gives every modified CJ a U-2esque mystique, while operators laud the additional range. And yet the company continues to generate media scepticism over the reduced fuel burn it promises. Guida reckons it’s because the industry has been accustomed to the single-digit improvements achieved with traditional winglets, which makes the 20 to 30% he claims seem implausible.

But Tamarack’s customers are delighted with their Active Winglets and there seems no shortage of new operators coming forward to place orders. The real irony is that the media, while apparently convinced that miniature drones will soon be swarming to our doorsteps delivering iPads and toasters, or that battery-powered long-haul airliners are just around the corner, is reluctant to see the benefits of a real-world, customer-proven system based on sound aerodynamic and engineering principles.

So far, Tamarack has focussed on Citation models, but the technology is applicable to almost all platforms, should a customer require it. Guida is keen to expand to other models but says the approach has to make sense. “We have people come to us saying they want Active Winglets. We want to move up the food chain and we want them to have the performance, so we ask: ‘Why don’t you take it to your owners’ group?’ They may have three or four hundred owners in the group and if they work together, we can license the technology to them. Then they control the price and the margins. They’ll want a low price, of course they will, but I can’t give them that as individuals. If lots of owners put deposits down though, then we can do the math so they get a good price and it makes business sense.

“We’re also looking at larger airframes and we have some interesting, exciting military developments. But my goal has always been narrowbody airliners.” By extension that means VIP-configured airliners too, but many of those are already winglet equipped. Is there a nascent winglet replacement market too? “Take them off, put an extension and Active Winglets on,” Guida says. Even in this situation and depending on type, he suggests operators will achieve an improvement in climb rate and 15 to 20% improvement in range under optimum conditions.

Guida is clear that Active Winglets offer significant performance improvements and dramatically reduced fuel consumption, with obvious benefits to aircraft utility and operating costs. But there is also an environmental bonus. A modified CJ burning regular jet fuel, even more so sustainable alternative fuel, would fly a long way with minimal carbon footprint, costing the operator less in carbon offset and speaking to the industry’s sustainability goals.

Tamarack has worked through its fair share of troubles and has its doubters, but as the aviation industry looks to reset for a sustainable future post-COVID, now must surely be its time.