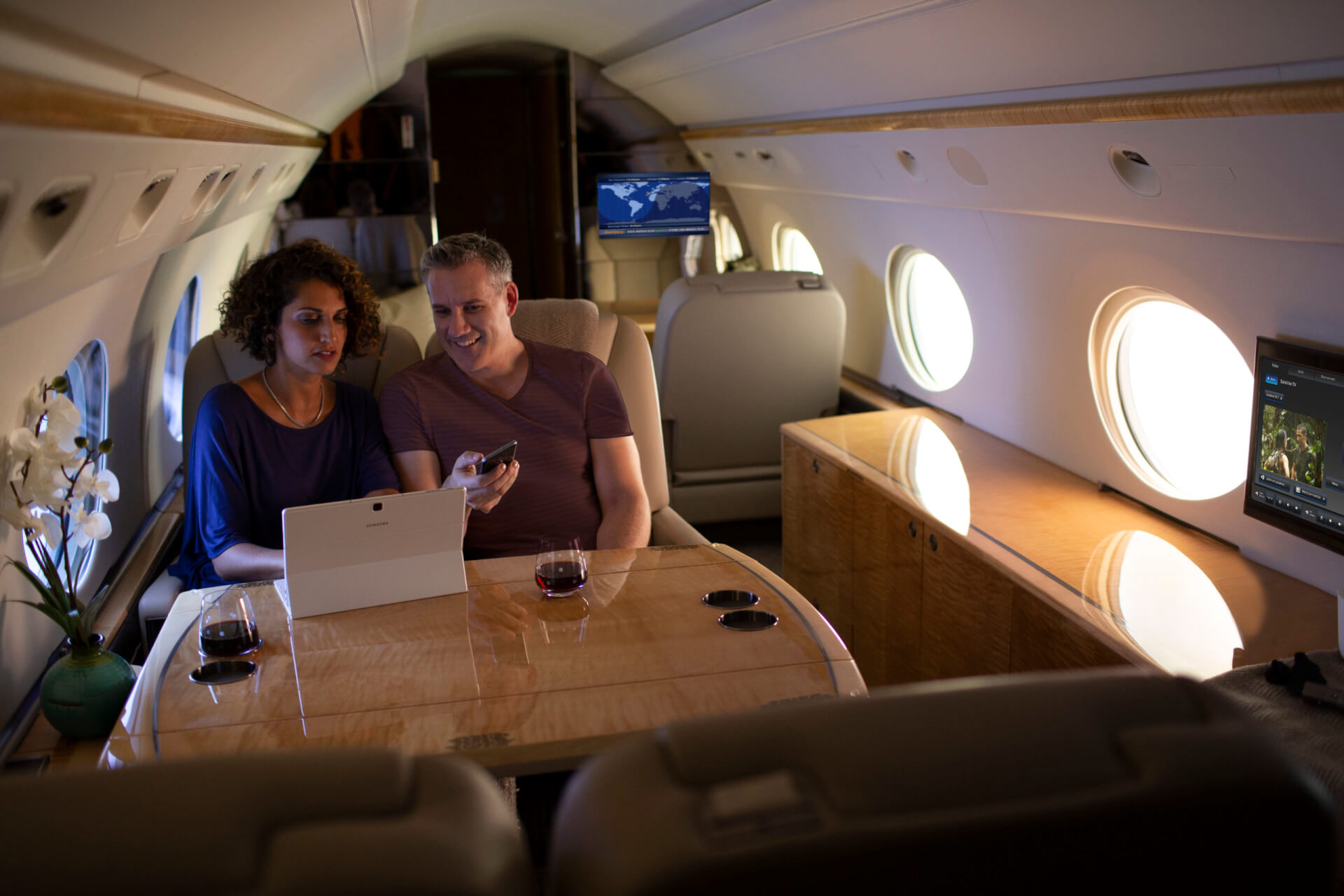 Collins Aerospace is entering a new era of integrated cabin solutions, most recently epitomised by its next-generation Evolution seat and LuxStream connectivity product

Collins Aerospace finds itself in the unusual, enviable position of being involved in virtually the whole of the business aircraft manufacturing, support and overhaul supply chain. Its combination of legacy businesses means that Collins has pretty much everything, from avionics and cockpit systems, through undercarriage units and air data sensors, to IFEC and seating; perhaps the only thing it doesn’t do is build aircraft.

The company’s seating expertise derives from its B/E Aerospace heritage, but the wider product and knowledge base of the Collins Aerospace enterprise means its seating products are beginning to incorporate technologies its experts hadn’t realised were available to them as recently as 18 months ago.

At EBACE in May, the company launched its next-generation Evolution seat, leveraging the best of commercial first-class seating design and technology, and adapting it to the needs of business and VIP jet travellers. The seat’s cleverly engineered articulation enables recline through a single motion – recline is usually through two separate motions – providing cabin designers more flexibility by enabling seat installation closer to cabin bulkheads. It also provides a dramatically comfortable one-touch recline option to the passenger.

Adding further to its uniqueness of design, Evolution sits on Collins’ new mini-base pedestal, which mounts into the standard seat tracks, but assumes a far lower profile over a smaller area than traditional mounting systems. These require a ‘pallet’ between seat and track, which the mini base does away with. The result is a much reduced sub-seat structure that isn’t immediately obvious and gives the impression that the seat is floating over the cabin floor; it also saves weight compared to traditional designs.

In your correspondent’s experience, a degree of familiarity certainly helps in the quest to arrange a business aircraft seat to exactly the position required for comfort in any of its many positions. But even here, Evolution delivers a feeling of floating, or perhaps gliding, as it moves easily between positions, cradling and supporting as it goes. For those of us on the short side of average and/or lighter passengers, moving a conventional seat can be rather more of a challenge than expected, an issue Evolution avoids thanks to what Collins describes as a ‘…proprietary triple roller system for a smooth transition between seat positions with minimal effort’.

According to Collins’ literature, “Evolution cradles a passenger’s body in a suspended lounge or ‘zero gravity’ position for maximum relaxation, while at the same time providing a new articulating pivoting backrest that provides additional thoracic and vertebral support when the individual is in dine or work mode. This is the first time an Adjustable Thoracic Support Backrest has been incorporated in business jet seating. In addition, Evolution’s unique, patent-pending kinematic seat motion provides its lounge position via ‘one-touch comfort’ articulation.”

Additionally, Collins Aerospace has recognised the increasingly important role seating plays for passengers exploiting the half-world reach of the highest-performing jets from Bombardier and Gulfstream, as well as the airliner-based ACJ and BBJ platforms. Longer ranges mean more time on board and while the principal might enjoy a dedicated bedroom, others require proper fully-flat sleeping surfaces. Evolution converts into a full-flat bed, easily, of course, and features: “…new ‘comfort max’ cushions that provide a special energy-absorbing mattress while in sleep mode”.

It all sounds wonderful, or possibly too good to be true. So, getting comfortable in the next-generation Evolution seat at the company’s NBAA booth, I prepared for a conversation and demonstration with Moises Perez, Director, Sustaining & Development Engineering Interior Systems.

First, did the seat appear to be floating? In all honesty, I’m not convinced it did, but in photos and video from the booth it certainly appears not to be touching the floor, so perhaps I wasn’t paying attention. Initial impression on sitting down? Evolution is considerably firmer than I expected…

Perez produces a cross-section of the seat structure and highlights the layer immediately below the upholstery. “It’s energy attenuating foam,” he explains. “Through your body heat, you accommodate into the layer. The top layer works somewhat like a Tempur-pedic mattress.” As he was talking I could genuinely feel the seat become more accommodating, transforming from the comfortable side of firm to the hug side of comfortable. “The longer you sit, the more comfortable it becomes,” Perez confirms.

The worth of such a design, even over just a couple of hours, is obvious, but over a double-digit journey it becomes invaluable for sleeping and sitting. And there are other benefits. “When you get up, the foam begins returning to its original shape. The product is manufactured with nice, tight pull lines,” Perez says, indicating the seams where the leather upholstery is stitched and pulled tight, “and even after considerable use these remain tight because the foam returns to shape. It means the product looks beautiful for longer. Previously you could only do that with rigid foam.” It also means the sagging typical of well-used leather upholstery isn’t going to become evident for a considerably long time.

Collins Aerospace most likely called its latest seat Evolution because it represents a step beyond traditional business jet seat design, but it might also have named it Evolution for how it evolves with you every time you sit down to rest, eat or work, or recline to sleep. In an industry where subtle individuality is always desirable, a seat that moulds itself to every body is as ingenious as it is comfortable.

Comparing Evolution to established seat designs, Perez activates a button on the Evolution armrest. Already there’s a significant difference. The next-generation Evolution seat on the booth apparently had no buttons at all. Instead, pressure applied to stitched symbols activated the various seat functions. The conventional buttons were obviously underneath the stitching, but no functionality was lost and they proved impossible to feel.

Then, as the seat begins to move, he notes: “As the seat reclines, the back rest moves down, as on a traditional seat, but we’re also translating the movement forward, so the body is cradled as the seat moves.” At the same time, the arms move down – ‘pancake down’ as Perez puts it – and the leg rest becomes available to complete an especially comfortable, natural lounge position.

At the same time, the headrest articulates forwards, effortlessly supporting the head. “We found a lot of occupants don’t like to rest their head on the surface, they prefer to rest the back of their neck. So the headrest moves forward to provide that support and provide the perfect position for looking at a monitor, especially if it’s bulkhead mounted.”

The seat continues through the lounge position to create a flat sleeping surface 80 inches long which can actually be made fully flat via further articulation of the split backrest. The width between the arm supports is 22 inches, making for a comfortable sleeping space. Thanks to clever design and the energy attenuating foam, there’s no requirement for additional cushions or mattresses, reducing bulk and weight in the cabin. The seat back articulation also has utility in the sitting position, since it provides additional upper back support for reading or working.

The fact that the display seat is ‘assisted’ makes for an even smoother experience. Small electric motors between the control buttons and mechanical functions actuate the movements, meaning no requirement for large handles or ‘leg swinging’ to persuade the seat into action. Lateral, forward and aft movement are characteristically smooth thanks to what Collins calls the Black Ice track and swivel system.

Perez described the ‘stitched controls’ as a conversation piece for the show, with the intention of saying to customers and designers: “‘Hey, is this interesting?’ We’re illustrating that you don’t have to have a touchscreen or hard buttons. We do that all the time, so why not do something different?”

The overall Evolution experience is quite extraordinary. The next-generation seat looks exceptional, with deceptively clean lines as shown at NBAA BACE. Supremely smooth and simple in operation, it cossets and supports, optimising comfort whether the occupant is eating, working, sleeping or at leisure. And it adapts to each individual user’s body. Every time.

Although his focus has been on the next-generation Evolution seat – or Evolution 2 – Perez glances around the booth at the dramatic lighting, Venue display and other Collins Aerospace products on display and emphasises the advantages of its new-found breadth of capability. He chooses a three-place divan, integrated into the cabin management system, as an example. “We worked with the Venue CMS guys in order to be able to control elements of the lighting and displays from integrated controls in the divan,” he says. It’s an indication of a new era in which Collins Aerospace is able to provide a fully integrated solution for the cabin and cockpit, but may also be installing the connectivity, undercarriage and key propulsion and mechanical components, and wrapping a complete service and support package around it too.

All of this was evident on the booth, where there was also a frisson of excitement over connectivity, thanks to LuxStream, Collins’ new Ku-band product delivered in partnership with SES. Delivering 25Mbps in the US and 15Mbps elsewhere, LuxStream is fast, but LeAnn Ridgeway, VP and General Manager, Information Management Services, was perhaps more excited over the flexibility of LuxStream pricing, which even includes a pay-as-you-go option.

LuxStream works with whatever router a customer chooses, but provides optimal service through Collins’ equipment, effectively combining the former ARINC’s connectivity expertise with the avionics and cabin management skills of Rockwell Collins to create an integrated Collins Aerospace passenger experience. Where once one might have talked about buying connectivity simply as a pipe to the aircraft’s router, having the router ‘talk’ to the IFE and CMS, then deciding on interfaces for control, now the entire package can be assembled seamlessly from one supplier, down to CMS controls integrated into seats, which are designed for optimal comfort.

Ridgeway notes that LuxStream, combined with the recommended Collins Aerospace router, has the flexibility to serve cabin and cockpit. That helps transform and disrupt at the front as well as in the back, driving new possibilities including the ARINCDirect iPad app, which Collins Aerospace has enhanced with an oceanic plotting chart. It’s one example of what Ridgeway calls a fusion of connectivity and technology, where the previous focus on streaming to the aircraft has switched to include data uploaded from the aircraft and how it can be used to generate operating efficiencies and enhance safety.

Opening the world of ARINCDirect content and integrating seamlessly into the Venue cabin management system, LuxStream epitomises the traditional values and long-established companies Collins Aerospace represents, all combined under one brand, with a single-source support and service organisation and a clear vison for the future.