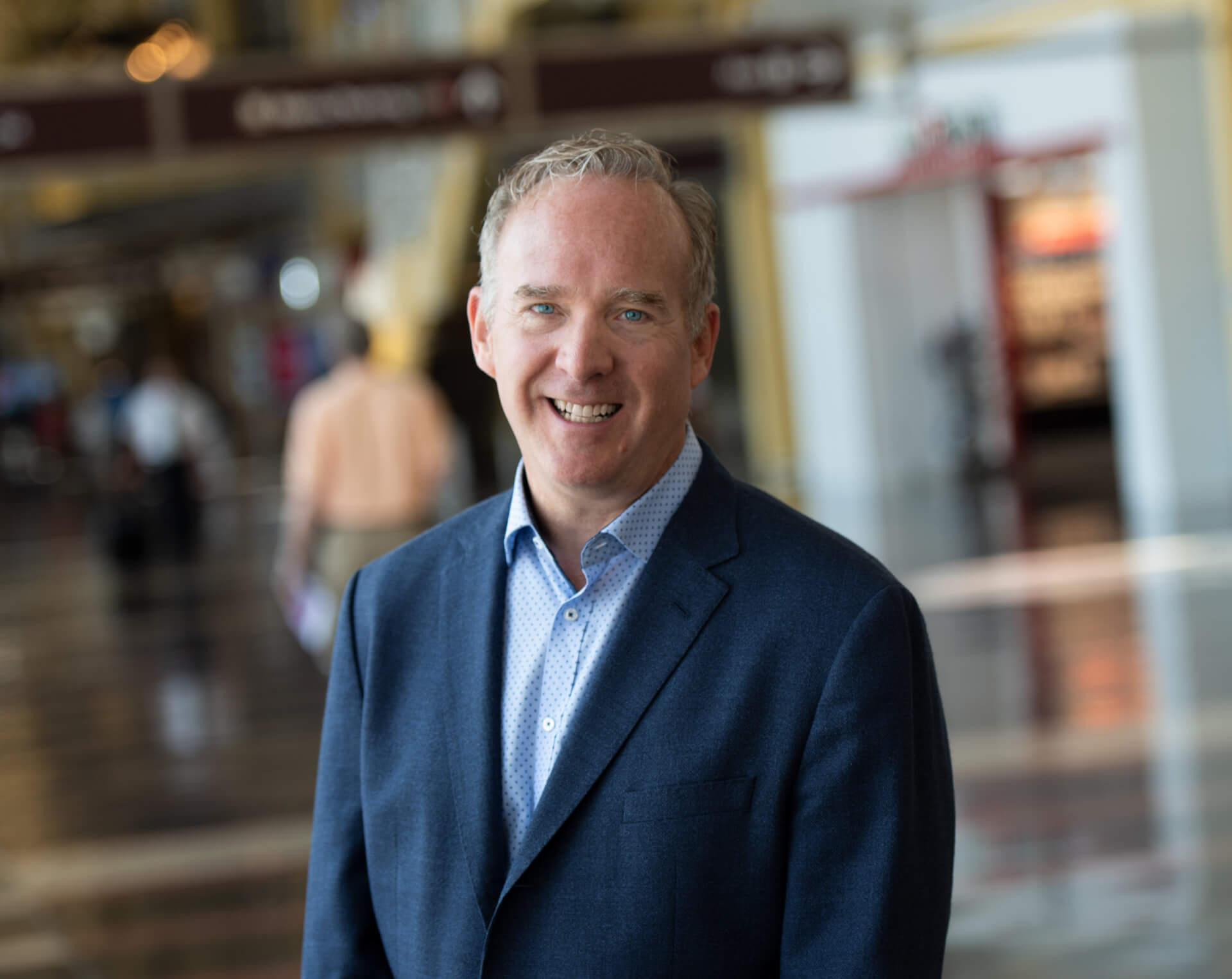 Goji Geotainment has created a storytelling moving map, a unique proposition that becomes available in 2020 in the GojiBox, a small blue box of magic

Peter Nissen, President & Executive Producer at Gotham Studios, is an Emmy Award-winning professional storyteller. His medium may be video, television and audio, but he’s a storyteller nonetheless. After many years looking out of aircraft windows wondering about the stories of the people and places below, he decided to create a moving map-based inflight storytelling system. In essence inflight entertainment, in reality it’s so much more.

“Working as a TV producer and living in Los Angeles a couple of decades ago,” Nissen recalls, “I found myself doing a lot of flying around the country. When I’m sitting at the airplane window I always wonder what it is that we’re passing by. What’s that city? That mountain? Who lives there? What history has been made there?

“I realised there are a million stories to be told right under our noses and I wanted to know what those stories were. I didn’t want to just tune out on a flight, I wanted to see and know about all the places in between. I thought there must be a way to provide a guided tour of the flight, just as you might in a museum. But it had to be smart, and flexible enough to go wherever an airplane goes.

“I run a media production company, so I got down to business with some programmers and writers to think about how we might make it happen. We came up with the idea of Geotainment, which tells the story of wherever you are, but changes the show on the fly.”

Geotainment is delivered through GojiBox. As such, even though much of its content is licenced, the award-winning studio’s experience is a guarantee of its quality. And where content isn’t available, Gotham Studios is equipped to create it.

Yet customers already have a wide variety of IFE options and it’s tempting to ask if another is really necessary. But GojiBox has to be seen, better still experienced, to understand why it is different.

Nissen explains: “It mixes general interest knowledge with entertainment. It tells you about history, geography, pop culture, but it also includes radio drama relevant to the places you’re flying over. That’s version one. In version two, which we’ll rollout a year from now, we’ll have specific channels, starting with sports and children.”

“I’m a parent of teenagers and I’ve been flying them back and forth their whole lives. I know children can become bored on airplanes, but also how interested they can be and how curious they are when they look out the window. They naturally want to know about the world and so the channel will cater to that and tell them stories the way children love to be told stories.”

Creating quality content sufficient to provide interesting stories wherever an aircraft flies is a serious challenge. Doing the same for a business aircraft that doesn’t follow schedules or regularly prescribed routes between the same airports, even more so. As a result, Goji Geotainment carefully sources the highest quality material.

When Goji reaches out more specifically to children, it will potentially reach folk who will remain customers for decades. But right now, the focus is on establishing and explaining the Goji brand. “We want to have the Goji Geotainment brand recognisable for many years but, wherever it might take us, we’re still in its first incarnation. We want to entertain everyone, but right now our focus is on the curious adults who comprise the majority of business aircraft passengers.

“We want people to understand what this new kind of entertainment is. Honestly, I believe we have a chance to redefine what a moving map is. I’d love to change the standard of what people expect from a map.”

EVA witnessed the GojiBox at NBAA-BACE 2019, albeit at the Goji Geotainment booth. The unit’s compact size and low weight belie the fact that it contains maps and stories for the whole of the US and Europe – with extensions to come – 1TB of storage capacity and an LTE modem. But what really stands out is that this small box of big stories is bright blue. GojiBox makes a statement even before it’s plugged in.

“We had a very good show and we have orders. We’ll have our first installations in first or second quarter 2020. The GojiBox is just over one pound of electronics and from that comes a Wi-Fi signal, via an ethernet link and the aircraft’s WAP [wireless access point]. The Geotainment begins with a homepage that takes you into a beautiful, Google Earth-type 3D interactive map that you can move around with your fingers. Then, there are buttons for ‘Points of Interest’. These display 4K images of interesting places as you pass them by, along with facts.

“And there’s a button called ‘Georadio’. That provides a continuous audio programme that sounds like a radio programme; there are no gaps, you don’t hear about something and then have to wait 20 minutes before you hear about something else. We have thousands of visual and audio points of interest over the US and Europe. We’re now expanding to the Middle East and then into the Far East in a couple of years.”

Thanks to its small size and light weight, GojiBox also has the potential to bring moving map and IFE options to lighter jets and turboprops. “These aircraft often don’t have maps or inflight entertainment because until now the servers required have just been too large and heavy. We can fix that. We didn’t put a Wi-Fi transmitter in the box because it’s redundant on so many airplanes, but if an aircraft isn’t equipped, it’s an easy fix, we can recommend an inexpensive Wi-Fi system.”

Another key message is that the full GojiBox experience is achieved without inflight connectivity. A world of maps, facts, stories, entertainment and even movies, is available wirelessly without an air-to-ground or satcom connection. The GojiBox’s large storage space enables users to load their own movie choices, which become available for streaming to personal devices or monitors.

“The box also has an LTE modem and every time the airplane lands and the modem gets a signal it ‘phones home’. It checks to see what content needs to be updated, looks for new material and could be used to download large media, like movies.”

The modem also enables firmware updates: “We want owners to install the box and forget about it. We’ll take care of all the maintenance virtually.” And if there’s an issue remote intervention can’t fix? “We have a warranty and 24-hour customer support.”

GojiBox has all the utility of a top-quality moving map, plus extensive storytelling and entertainment possibilities, meaning it has something to offer even the best equipped aircraft. But there’s more, the content can be customised to suit customer requirements. “And not only that,” Nissen enthuses. “The customer has the ability, through a dedicated portal, to do their own customisation. They can log into their GojiBox, then add their logo and change the aircraft on the map. The colours can be changed to match corporate colours and, if you give us a call, because we’re a television production company we can produce custom content as well. If you’re a restaurant chain, for example, we can produce points of interest to do with your restaurants as you pass over cities.”

Goji Geotainment is already talking to Hollywood to secure licencing for early-release movies in a future GojiBox iteration, and it’s intriguing to consider what other possibilities licencing might realise. GojiBox might be customisable to become as individual as a ringtone – how about having your jet appear on the map as the Millennium Falcon, for example? Or perhaps a Fortnite glider?

“Anything might be possible,” Nissen agrees. “We already use a Snoopy biplane for demos. He’s there in his Sopwith Camel, flying over the map and it’s the cutest thing. When we produce the children’s map we’ll definitely have a fun airplane that can be changed out if required.”

Early in December 2019, Goji Geotainment was in the process of obtaining parts manufacturer approval (PMA). GojiBox requires an STC, but with PMA in place it will be a more or less off-the-shelf product. Customers pay an upfront fee, plus a subscription, as Nissen explains. “There’s an affordable fee that’s at the middle to low end of other possibilities on the market. After the first year, an annual charge of a few thousand dollars keeps the subscription up to date.

“The subscription keeps the LTE modem going, since that’s on a contract we hold, and covers fees for content we licence from third parties. Customers who want the map but no content will pay less.”

Gotham Studios has created the concept of Geotainment and is bringing it to market with its unique GojiBox. Among the team there’s an evident sense of intense creativity, expertise and enthusiasm, but also fun, which leads one to question the unusual product name. “We called the original product Georadio, but radio was only part of it. We wanted it to be a map and visual too.

“We needed a much bigger, more flexible name, something abstract. My wife and I were thinking the problem through over a glass of wine and I looked at our dog, who accompanies us everywhere, and said: ‘What do you think, Goji?’ We did our due diligence and it works well, except perhaps in Japanese, but we’ll figure that out when we come to it.”