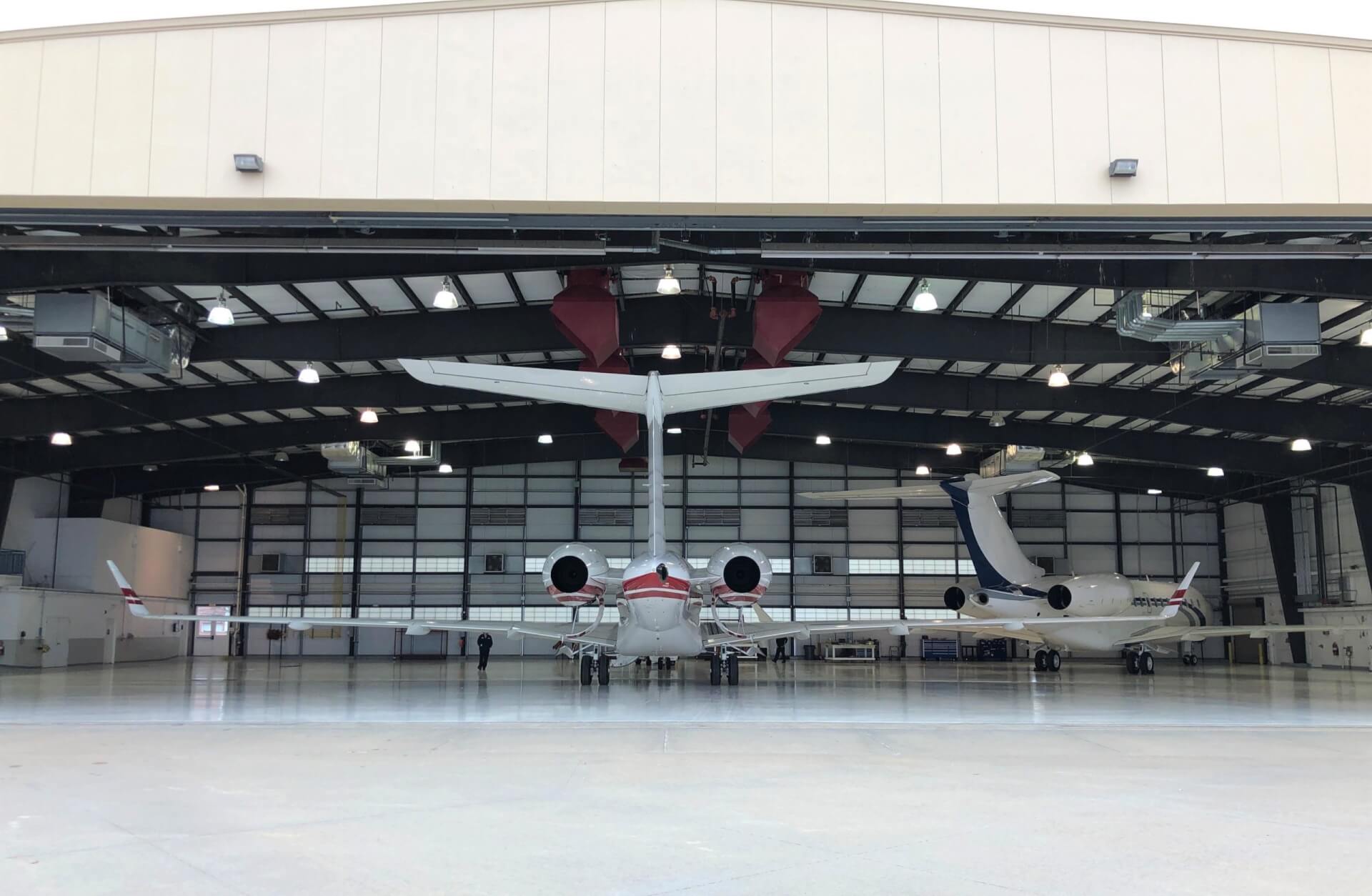 In May 1927, Charles Lindberg flew the Ryan NYP monoplane Spirit of St Louis from New York to Paris. The first ever solo transatlantic flight, Lindberg’s adventure was a seminal moment in aviation. A resident of St Louis, he named the NYP after his supporters back home, creating a moniker ideal for another pioneering aviation adventure that began three decades later.

The city of St Louis’s connection with aircraft design and production dates to 1939, when James McDonnell established McDonnell Aircraft, a company that became McDonnell Douglas in 1967 and subsequently Boeing; today St Louis is a centre of F-15 and F/A-18 production.

A keen private pilot, Paul D Haglin joined McDonnell as an aeronautical engineer in the late 1950s. He quickly became disillusioned with St Louis Lambert Field, where burgeoning commercial traffic was pushing out the general aviation operators. Looking for a new airfield at which to base his Cessna 195, Haglin began a two-decade odyssey during which Spirit of St Louis Airport (KSUS or SUS) emerged as a brand new airport at Chesterfield, close to St Louis. In 1971, the FAA rated it among the country’s four most important privately owned airports and in 1980 it passed from private to county control.

Construction of the initial 72,000sqft SUS facility began in 1992, alongside a 24,000sqft hangar in the airport’s southwest corner. An avionics shop opened in 2001, and in 2009, ramp space was expanded by 38,000sqft. By 2011, an additional hangar, more office space and further expanded ramp space were helping accommodate Aero Charter’s growing operations. Early in 2020, the company was operating a mixed fleet of 13 jets and turboprops, alongside its recently renovated FBO.

Passengers and crew visiting the FBO benefit from a variety of beverages and complimentary snacks, a planning lounge, a sleep lounge with new La-Z-Boy recliners and HD Satellite TV, two Ford Focus crew cars and more. Ground transportation, catering, hotel accommodation and any other requirements can also be satisfied.

The Million Air FBO was established at SUS in 1984. Capable of handling aircraft from single-engine pistons up to the Gulfstream G650, Million Air adds hangarage to an offering that includes fuelling and other ground services.

Its multiple award-winning FBO includes concierge services, crew cars, a pilot lounge, rental cars, hotel reservations and more, Million Air priding itself on treating its customers like family, with a focus on service.

A Phillips 66 Aviation partner, TAC Air offers a full range of ramp services, including free Wi-Fi, for business and military aircraft, in addition to on-site maintenance. Philip Bissonnette has been general manager since 2009 and explains: “We have the equipment to handle all narrowbody aircraft and, on a limited basis, we can service larger aircraft. The largest to date was a C-17 Globemaster III.” TAC Air is also the only SUS FBO with deicing services.

Meanwhile, the FBO has a fully-equipped crew lounge and ‘ultra-comfortable’ sleep area. Updates to the pilots’ lounge, conference room and lobby facilities will be completed by mid-2020.

TAC Air SUS is one of a national network of 15 FBOs and as the first large-chain FBO network to achieve IS-BAH Stage 2, customers are assured that TAC Air meets rigorous aviation industry safety standards and that its safety management and associated activities are appropriately targeted, and safety risks effectively managed.

Those high standards have helped attract a number of corporate customers: “We are proud to be trusted by some of the largest corporate flight departments, charter companies and fractional providers,” Bissonnette comments. “We have the largest and most experienced service staff and customers appreciate the value of seeing the same faces consistently.”

The size and scope of TAC Air SUS also enables it to host and support major events. Among these, the PGA Championship and other sporting events bring an influx of customers, while the FBO also provides ground services, coordination and management for one of the largest US air shows, The Spirit of St Louis Air Show and STEM Expo.

Duncan Aviation’s facility is a satellite avionics location providing troubleshooting and repair, as well as installation. Ed Reeve, Manager of the Duncan Aviation St Louis Avionics Satellite Shop, explains: “In common with the company’s other satellite facilities, we’re supported by Duncan Aviation’s vast network of knowledge, relationships and experience, from engineering and certifications to aircraft sales/acquisitions.”

Reeve says ADS-B activity has been among the shop’s most important work recently, alongside a busy period of AOG service work. “Over the last month, though, we’ve had more radar and autopilot issues crop up. Most of this troubleshooting is diagnosed same-day and repaired the following day after parts are delivered. We normally work on aircraft within a three-hour radius and spend a lot of time driving to the location where an operator needs us due to an AOG issue, although we have travelled as far as Chicago. In fact, we once sent a team member to Spain with a group of install team members from other satellites for a six-aircraft FMS upgrade. Much of our work is done on the field, though, supporting customers based here in St Louis.”

Between them, the four-man SUS team has more than 60 years of combined avionics experience and is actively looking for an additional, experienced team member. Among the more recent Duncan Aviation avionics satellite locations, the St Louis facility was established in February 2011 out of the former Signature TECHNICAir shop. Duncan Aviation had actually been at SUS at the beginning of the 1990s, but a devastating flood in 1993 devastated the airfield and closed the shop.

A long-serving member of the SUS community, Reeve says: “I’ve been working in avionics here since 1998 and established great relationships and friendships on the field. I really view the airport as my Chesterfield family and that means I know the operators with aircraft based here and supporting them is a top priority. Others on the field feel the same way. Everyone has either worked with one another or for one another, and we do what we can to support our clients and aviation in the area.

“Even if we are competitors, we work together to support our mutual clients. If I get a call for airframe maintenance service on an airplane that I can’t support, I’ll refer it to a competitor. They do the same with avionics issues. Our main goal is to keep our base customers flying.”

Reeve’s is a sentiment echoed by Scott Meyer, recently appointed VP and GM of Flying Colours’s SUS facility. “Resource sharing and collaboration is always a leverage point that everyone at every airfield tries to exploit to the fullest extent to attract aviation business to the airfield and surrounding community. We see it as our obligation to do all that we can to support the community we live in and serve.”

He explains that at Spirit of St Louis Airport, “We offer a full range of MRO services under one roof. They include minor airframe modifications and structural repair, routine and unexpected maintenance inspections, landing gear overhaul and repair, corrosion and composite repairs, avionics upgrades, and a full complement of interior cabin refurbishment.” The Ontario-headquartered company is renowned for its Bombardier expertise, but Meyer notes that its capability extends to Beechcraft, Cessna, Dassault, Embraer, Gulfstream, Hawker and Pilatus aircraft too.

Flying Colours became established at SUS after acquiring the JetCorp Tech facility in 2009. “Flying Colours had been working in partnership with them on a number of programmes when the owners asked if we’d be interested in acquiring the facility, which we did,” Meyer says. “In 2013, JetCorp became Flying Colours KSUS, aligning the brand and processes across the North Americas.

“We have four hangars with nine aircraft slots, two of which are capable of accommodating large, ultra-long range aircraft. This means we can quickly react to drop-in requests and AOG circumstances. We are very ‘present’ on the airport with an extensive footprint across hangers and workshops, so we can respond quickly to customer needs.”

Spirit of St Louis Airport brands itself as ‘Business Aviation Center of the US’ and, given its central location in the country and extensive FBO, MRO and extended service offering, it seems a claim well made.