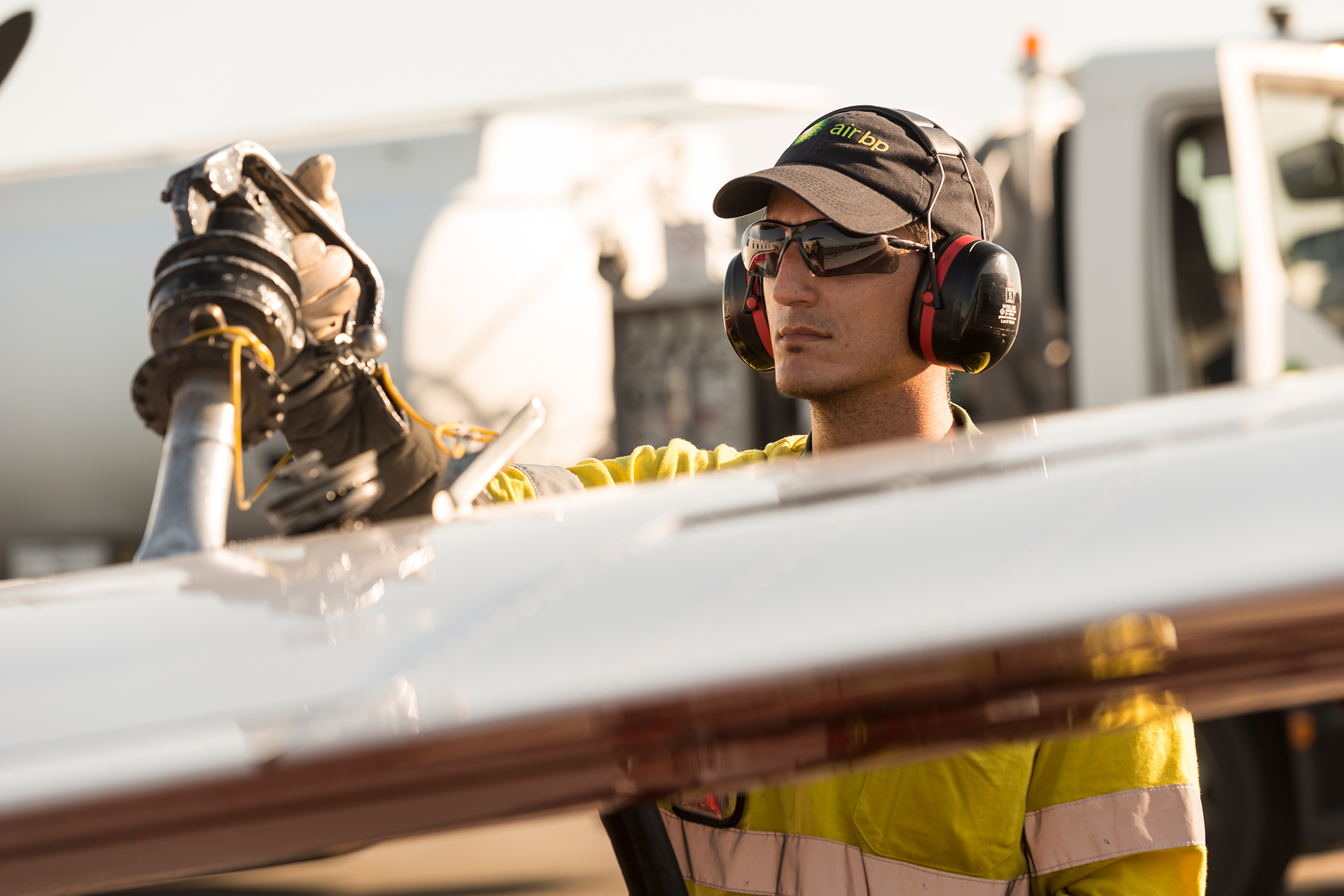 When sustainability is the issue there is always more to be done. Tom Parsons, Commercial Development Manager Low Carbon at Air bp, is very much on the global case

This is another story about sustainability. It will discuss sustainable alternative fuel (SAF), carbon offset and the ambition of a major industry player – bp – to become a net zero company by 2050. You probably know all this, so rather than wasting time reading it, you may as well move on to the next article. Or maybe not…

Gulfstream has been among several business aviation companies seeking to re-energise and reach out through webinars. It’s sustainability episode was engaging not only for its content but also the questions it generated. Experienced operators were still enquiring over the aircraft modifications needed before fuelling with SAF, suggesting that the message needs further work and perhaps it is worth reading on.

No modifications are required before fuelling with SAF. Again. No modifications are required before fuelling with SAF. Tom Parsons, Commercial Development Manager Low Carbon at Air bp is an expert on all things regarding sustainable alternative fuel. He reiterates: “It is important that owners and operators are aware that SAF can be blended at up to 50% with traditional jet fuel and all quality tests are completed as per that traditional jet fuel. The blend is then re-certified as Jet A or Jet A-1. It can be handled in the same way as a traditional jet fuel so, as mentioned, no changes are required in the fuelling infrastructure or for an aircraft wanting to use SAF.” In 2016, Air bp became the first operator to begin commercial SAF supply through an existing hydrant fuelling system, at Norway’s Oslo Airport.

If it helps, think of SAF as ‘Sustainable A-1 Fuel’.

Where’s the saving?
Jet A and SAF burn the same way, producing carbon dioxide as a normal combustion product. So how does SAF save on carbon emissions? It’s all about where the carbon comes from. The carbon in all conventional hydrocarbon fuels is extracted from the ground; it’s derived from ‘fossilised’ organic remains, millions of years old. Burning it therefore releases carbon that has long been out of circulation.

A former US Air Force F-15 pilot once described the long No-Fly patrols he conducted in the 1990s as ‘burning dead dinosaurs’. He knew the majority of fossil fuel is derived from plant matter, but ‘burning dead lepidodendron’ isn’t half so catchy.

The carbon in SAF is not derived from hydrocarbon reserves. Instead, it is effectively second-hand, since it has already been extracted for other products, now waste, or from the air, by growing plants.

Tom Parsons says: “Depending on the sustainable feedstock used, production method and supply chain to the airport, SAF gives an impressive reduction of up to 80% in carbon emissions over the lifecycle of the fuel compared to traditional jet fuel.

“Typical feedstocks include used cooking oil and other non-palm waste oils from animals or plants, and solid waste from homes and businesses. This might include packaging, paper, textiles and food scraps that would otherwise go to landfill or incineration. Other potential sources include forestry waste, including waste wood, and energy crops, among them fast growing plants and algae. Air bp’s SAF is currently made from used cooking oil and waste animal fat.”

The industry is gradually waking up to SAF’s critical importance in helping it towards the stated aim of carbon neutrality. And yet SAF is still not available widely enough to make a significant difference and, where it is, operators must pay a premium because it currently costs more to produce than regular jet fuel. It’s the age old problem of supply and demand, but one the aviation industry and its fuel suppliers must overcome because this time it’s not only good business, it’s a global imperative.

Ramping up production
Air bp is ramping up its SAF activities against a declared intention of supplying 20% of the SAF market by 2030. Collaborations with Fulcrum BioEnergy and Neste are helping it towards that lofty goal, as Parsons explains.

“In 2016, Air bp created a strategic partnership with Fulcrum BioEnergy, with an initial investment of $30 million. The Californian company is building its first plant in Reno, Nevada, which will produce sustainable transport fuel made from household waste. Fulcrum intends to construct additional facilities and ultimately plans to supply us with at least 50 million US gallons of SAF per year.

“In 2018 we signed an agreement with renewable fuel producer Neste, which manufactures sustainable fuel from 100% renewable waste and residue raw materials. Through this collaboration we are developing new SAF supply chains and will be able to offer a five-fold increase in SAF to customers in 2020 and 2021, compared to 2019. We expect the majority of the sustainable aviation fuel supplied through this agreement to be delivered in the Nordics, as well as some other locations in Europe. Plans to supply locations other than the Nordics will depend on demand.”
Air bp has so far supplied SAF at 16 locations, to around 25 different customers across three continents, but Parsons’ mention of the Nordics is particularly significant since the region is embracing SAF more keenly than most. “We have supply chains established in Sweden and Norway, from which we are supplying locations across the region, including Arlanda Airport in Sweden and Oslo Airport (OSL) in Norway.”

Reducing cost is the key to achieving this greater acceptance and deployment of SAF globally. Parsons is optimistic, but doesn’t see a simple fix to the conundrum. “It requires a range of solutions across the short, medium and long term that give investors the confidence to make the big investments required to grow supply.

“These solutions include financial incentives for investment in advanced technologies for processing feedstocks more efficiently at greater scale, and investment in the development of sustainable and scalable feedstock options. Policy incentives are also important, including carbon pricing and realistic and achievable SAF mandates, such as that implemented in Norway this year, which requires at least 0.5% of jet fuel supplied to be SAF.”

Nonetheless, there are operators willing and able to use SAF, supplied as a blend with conventional fuel. Supplying SAF reduces emissions but since it needs to be supplied as a blend, there are inevitably some residual emissions which need to be offset to achieve net zero. Carbon offsetting is therefore an essential factor in everyday operations if the aviation industry is to achieve its stated aim of carbon neutral growth from 2020 and a halving of total carbon emissions by 2050, relative to 2005 levels.

Compensating for carbon emissions
Carbon offsetting schemes abound and we’ve probably all seen images of verdant forests, happy families and herds of roaming wildebeest, but how do these relate to cancelling a bizjet’s carbon emissions and what is it that this proliferation of schemes is actually doing?

Tom Parsons provides a straightforward explanation. “Carbon offsetting compensates for your carbon emissions by funding an equivalent amount of emissions saving elsewhere. It can help as part of a broader carbon reduction approach and should be the last step after efforts to reduce and replace have already decreased your emissions.

“In aviation, carbon offsetting starts with measuring how many tonnes of carbon are produced by a flight. This creates the carbon ‘footprint’ for the flight and each passenger. Once this is measured, carbon credits can be purchased for the same amount of emissions, effectively balancing out the carbon emitted so the net impact on the climate is neutral.
“Carbon credits are bought from projects around the world that are reducing emissions. These initiatives include forest planting, replacing open fires with more efficient cooking equipment, and biogas installations. They often have a broad range of socio-economic benefits as well. For example, when cookstoves replace open fires, wood consumption is reduced, carbon emissions are reduced and respiratory health may be improved.”

Air bp actively promotes carbon offset, an effort that includes working directly with airports. Among them, the company announced a particularly significant collaboration with Cascais Airport, Portugal, in October. The aim is to offset the carbon emissions for all the aviation fuel sold at the airport. Parsons says that as far as Air bp is aware, it makes Cascais the first airport in the world where the carbon emissions associated with all aviation fuel are offset on an on-going basis.

Since 2016, Air bp has been independently certified carbon neutral across its global network of operated into-plane sites and the company is continuing its investment in sustainability as it inexorably transforms from being a fuel supplier to becoming a provider of energy solutions. Parsons reiterates that it is bp’s ambition to be a net zero company by 2050 or sooner. “And we want to help the world get to net zero,” he states.

Aviation has an important part to play in that but it will require, as Tom Parsons explains so clearly, “Collaboration across the industry, including between airlines, fuel suppliers, OEMs and governments. It is up to all of us to be part of the conversation and advocate for the changes needed.”