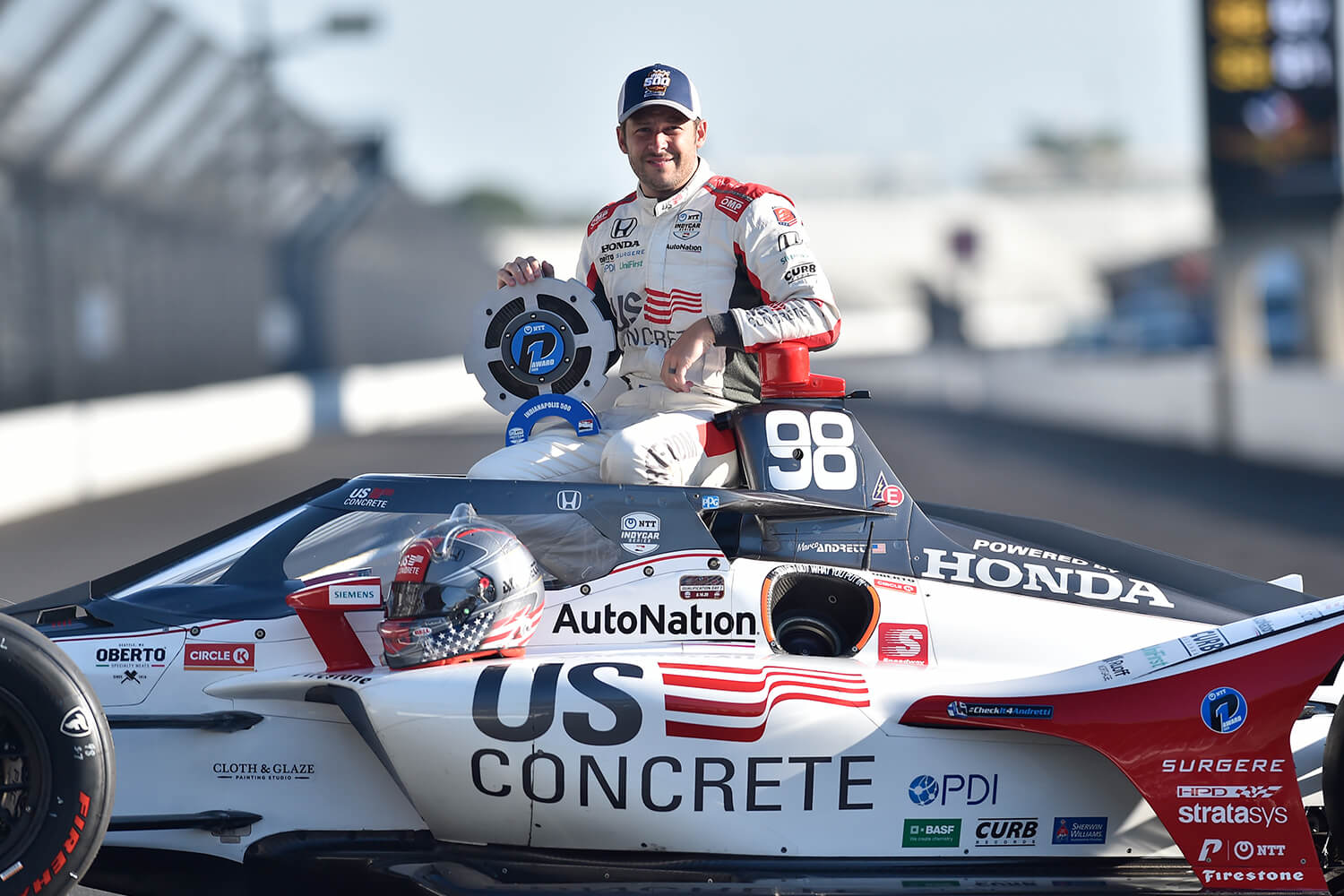 For his freshly repainted Hawker 800XP, Marco Andretti chose a design that reflects three generations of racing heritage and encapsulates the Andretti Autosport brand. “The red stripe began with my grandfather, Mario, who had it on his helmet many years ago. And then my dad carried it, adding a blue stripe and the American flag. I’ve taken those elements and incorporated them into my personal logo and company logo as well. The finished result on the Hawker 800 is a reflection of all those things and it turned out great!”

Sherwin-Williams has enjoyed a long relationship with Andretti Autosport and Marco says that made the decision to select from the company’s range of coatings easy. “Sherwin-Williams has been the go-to for years when it comes to painting the team’s race cars, so when I needed a new coating for the aircraft, they were a natural selection. I knew it would be a product I could count on for longevity, durability and great looks.”

The scheme uses Matterhorn White, Regiment Blue and Rumba Red straight out of Sherwin-Williams’ colour book, with the blue and red stripes painted in a complicated arrangement over the white base. Defining such a distinctive scheme requires lengthy discussion between the customer and scheme designer. Marco chose C&L Aviation Group, headquartered at Bangor, Maine, to perform the work, as Vice President of Sales – Corporate MRO, Ron Jennings, recalls.

“Marco Andretti’s aircraft is managed by a customer that has used us in the past for large projects on Hawkers. They approached us for a quote to paint the jet. Marco was in direct communication with our designer to express his thoughts on what the paint scheme and colours ought to be. Many revisions were made until the scheme and colours were to his satisfaction.” Interestingly, but typical of C&L Aviation Group’s flexible approach, Jennings says the deal with Andretti was sealed entirely via text message and email, both options suiting the busy driver’s complex schedule better than lengthy conversations.

Predictably, C&L Aviation Group was already familiar with the Sherwin-Williams product Andretti chose. Noting that customer satisfaction is the company’s top priority, Jennings says: “If there is a certain brand of paint a customer would like to use, that’s what we’ll go with. In many cases, that means Sherwin-Williams. We have found they offer excellent customer service while also providing competitive pricing and lead times.”

Speaking for the paint manufacturer, Julie Voisin, Global Marketing Manager, Sherwin-Williams Aerospace Coatings, says only limited time was available for the Andretti job and Sherwin-Williams lived up to its reputation for fast, accurate delivery. She believes that with every paint scheme her people move closer to the customer, and Marco Andretti’s Hawker was typical in bringing C&L Aviation Group and Sherwin-Williams together as a team.
“Aviation is very time and quality driven, and we have a reputation for delivering high quality, on time. If there is an issue, we’re there behind the customer to help them resolve it. We just work really hard to offer layers of the very best service, whether it’s colour matching, delivering paint on time, or assigning a tech representative to deal with a particular question.”

Painting Process
With the scheme approved, work began in earnest. There are two quite different, fundamental stages to completing any bespoke aircraft paint scheme. First, there’s the definition of a design that meets customer requirements and the subsequent transfer of that design from computer screen to aircraft; second is the process of stripping, preparing and repainting.

Jennings says: “Ultimately, the customer chooses the paint design and colours before anything else is done. Often they receive several design examples based on the original vision for the aircraft. Only once the customer is entirely happy does the process of taking that 2D rendering and transferring it to a 3D aircraft begin. It takes a great deal of hand-eye coordination and experience to lay out the paint scheme on an aircraft. In the case of Marco’s Hawker, the entire design was done freehand by our skilled paint team, using reference points on the drawing and aircraft to scale out the design.

“The process of painting an aircraft begins with stripping all the existing paint. First, all composite, glass and otherwise sensitive areas of the aircraft are covered with an aluminium-barrier paper. Then a paint stripper is applied and left on for up to 12 hours. After this, the aircraft is scrubbed and washed, before another layer of stripper is applied. Another thorough washing is completed before sanding begins. Once the aircraft is completely sanded down, work starts on building up the new paint job.

“First, an anti-corrosion primer layer is applied, followed by two or three coats of high-build primer, and a guide coat. This is sanded to a smooth finish ready for the base colour and then the stripe colours. Every aircraft is different and painting can take anywhere between two and four weeks depending on the design, number of colours, and size and condition of the aircraft.”

Yet the very best aircraft finishes are only achieved by skilled painters, a fact Jennings recognises. “Whenever I see our painters at work I feel they’re more artists and chemists than technicians; we give them a consistent environment so they have the very best conditions for the job. We’ve employed experienced paint technicians from all over the country, many of whom have OEM training. But we also have an on-site apprenticeship programme so that a new generation of aircraft painters can gain the experience necessary to become experts themselves.”
All of which adds up to a high-quality offering for all C&L’s private aviation customers. “We consider it a privilege anytime someone selects C&L Aviation Group to provide service for their aircraft,” Jennings says. “An aircraft’s exterior paint and cabin are a very visible way for an owner to express their personality and style, so we take great pride in helping them make their vision reality.

Marco’s Hawker
“We certainly enjoy having our craftsmanship viewed by a large audience, and serving someone like Marco Andretti, from a well-known family of famous drivers, certainly provides a larger audience and increases awareness of what we do. But we strive to provide a world-class product and experience for all our customers, while being cognisant that some want to keep a low profile. Of course, we hope Marco will share his experience and satisfaction with our product with others.”

For Marco, while the appearance of his jet is important to the Andretti brand, the aircraft is little more than an essential tool. “The Hawker has given me back so much valuable time to spend with loved ones. I’m able to get home at night after a race instead of having to stay away longer, dependent on commercial flight schedules. It also saves time in trips to the airport and with everything that goes along with commercial travel. And I can easily have my family – even our dogs – travel with us. After a long and busy weekend at the racetrack, the flight home is a quiet escape and an opportunity to wind down and relax before arriving. It’s an opportunity you don’t get with commercial travel.”

He’s effectively continuing a family aviation legacy proven through Ron Jennings’ own industry experience. A self-confessed non-follower of motorsport, Jennings remembers starting out in the industry as an aircraft fueller. “I refuelled Marco’s grandfather, Mario’s jet, I refuelled Michael, his father’s, jet, and now I’ve sold Marco himself a C&L Aviation Group service!”

Airbus reveals the next generation of CityAirbus

GEMINI WINGS adds another plane to their alliance fleet