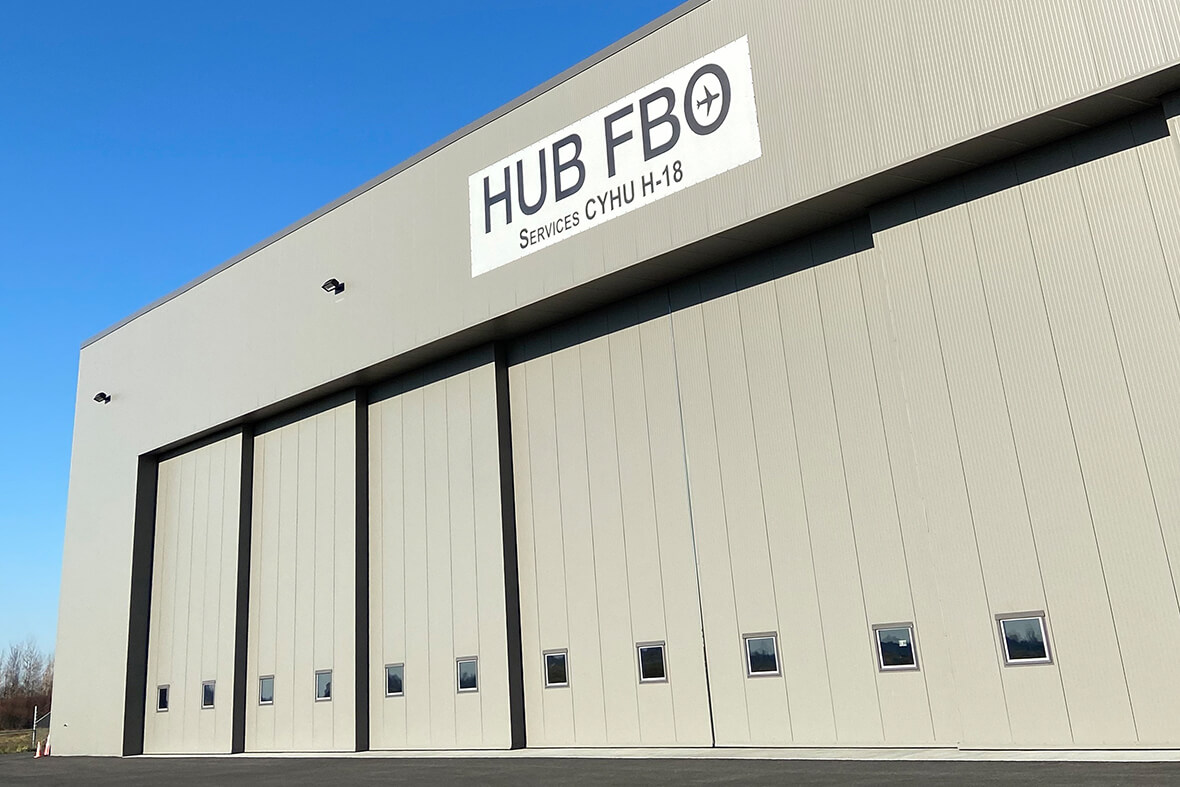 HUB FBO, serving Montreal/Saint-Hubert Airport, was denied the celebration planned for its 2020 rebranding but, through a combination of trusted customer service and diversity, General Director Sylvie Santini and her team are doing just fine

On 12 August 2020, the CYHU H-18 Services facility at Montreal/Saint-Hubert, Quebec, rebranded as the rather more succinct HUB FBO. Long-time resident at the airport, the team had moved into a new hangar and associated facilities in May 2019, then planned to mark last year’s August rebranding with a celebratory event that obviously fell foul of COVID.

The facility provides 45,000sqft, some 25,000sqft of which is heated hangar space. The hangar doors open to 160ft wide and 28ft high and the associated FBO offers every service one might expect of a modern facility, inside and out on the ramp. All of which could be a basis for describing any one of a number of FBOs – as usual, it’s the people and ethos of HUB FBO that make it unique.

Travel restrictions have shown us just how much can be achieved through video links and, at the same time proven the real benefits of proper face-to-face meetings. But the pure enthusiasm of the HUB FBO team, particularly General Director Sylvie Santini, is obvious even through a wobbly Zoom connection.

“We used to be in the old Pratt & Whitney hangar, which we purchased in 2012. Now, we’re in a brand new FBO, just 500m away. We wanted to build a terminal, but the airport authority decided they wanted to do that. It hasn’t happened yet, but that was the plan.”

Offering around 20,000sqft of office and FBO space in addition to the hangar, the facility remains under CYHU H-18 Services’ ownership, but carries HUB FBO branding. Santini says the idea was to provide an easier reference to the facility but admits: “The old crowd still calls us H-18.”

And that old crowd is quite large. Santini reckons around two-thirds of the airport’s traffic uses HUB FBO services. The facility has its own, branded de-icing vehicle that delivers the majority of de-icing at the airport, plus tugs and the like, while its refuelling services have carried AVJET titles since 2020. “They’re a big company here in Canada,” Santini explains.

The hangar and offices are important to the wider business, with several aviation companies renting office space and some parking aircraft in the hangar too. “We’re already quite full,” Santini says, “and very fortunate to have these clients with us.” It makes for an unusual combination of activity, HUB FBO effectively becoming a hub for business aviation, with an attached FBO. It’s a difference that runs even deeper, because HUB FBO also offers charter, and not through a resident company.
“I was charter manager at one of Trudeau’s FBOs for many years,” Santini explains, “and I brought my charter expertise here. We’re building that aspect of the business. We don’t have an aircraft of our own, so it’s all sub-charter, and it’s going really well.”

Nonetheless, there is serious competition at Montreal/Saint-Hubert and Trudeau International Airport from well-known FBO brands, so what draws customers to HUB FBO’s independent facility? “We’re the newest FBO in the Montreal area,” Santini declares proudly.

“It’s a really nice facility and we’re very well established. Anyone can play with prices to tempt customers, but we don’t believe in just cutting prices, because there’s a cost to everything and we want to stay open next year as well! Our clients are very loyal, they come back to us because they receive great service – that’s most important.”

Santini says the HUB FBO experience goes beyond the facility itself. “We can arrange helicopter charter, car rental, anything a customer needs for their onward journey. We have a concierge service too, so we can organise hotels and the like, even though the pandemic has created an entirely different view. We also look after our visiting crews.

“We get to know our clients pretty well and we know crews are important. We offer to book hotels for them, arrange crew cars and help get them wherever they need to go on to. We try to do everything we can for them and we have a beautiful, comfortable pilot lounge, with two closed rooms for proper sleeping rather than snoozing, brand new showers, conference rooms, a kitchen and a cafeteria, with good Nespresso coffee. That’s why they like coming back. We spoil them!”

Personal service
Small details, like good coffee, can make all the difference in an industry where high service standards are common, but Santini says HUB FBO also excels at delivering exceptional levels of personal service. “We had a client who left their computer and we did everything necessary to reach them and tell them we were keeping it safe until their return. Another customer had a shirt that became dirty for some reason. It was important for him to have it, so we washed, dried and ironed it for him. He was very happy and it’s those details that make the difference.”

She’s correct of course, those details do make a huge difference, but perhaps the most obvious difference between HUB FBO and an increasing majority of similar facilities around the world is its independence. The team has no desire to be part of a chain, for reasons Santini explains. “We could rebrand with an international company and there are several of them coming into Canada, but so far we’ve done really well. Our investors funded the new facility to see it develop and mature, not to turn it over to a chain as soon as it was complete. It’s not something we’re closed to, but for now, we’re doing just fine.”

It’s obvious that HUB FBO really is doing well and has loyal, happy customers, but it seems there’s more to Sylvie Santini’s enthusiasm for the facility. “There’s an old adage that once you’re in aviation you never leave it,” she says. “I’ve been in aviation since 2008, not so long ago, but I definitely, definitely love it. We’ve been very lucky that we’ve been able to come into work every day through the pandemic and although we could work from home, because Danie [Danie Buteau, Director Sales and Operations] and I run the place, we like to come in as much as possible.

“I love pretty much every angle of the business. There’s always something interesting. COVID has hurt the industry quite a lot, but we’ve been able to maintain ourselves pretty well. We host PWC’s [Pratt & Whitney Canada’s] corporate and executive charters, we have sports teams and individuals who’ve been using us since before we moved and with the COVID restrictions we’re getting more calls from new customers. We’ve some contracts we’ve been able to continue with, including local mining contracts, that have helped us, and so we’ve been hit, but we’re doing fine. Every day it’s still great to work in aviation. Honestly, we just love what we’re doing.”