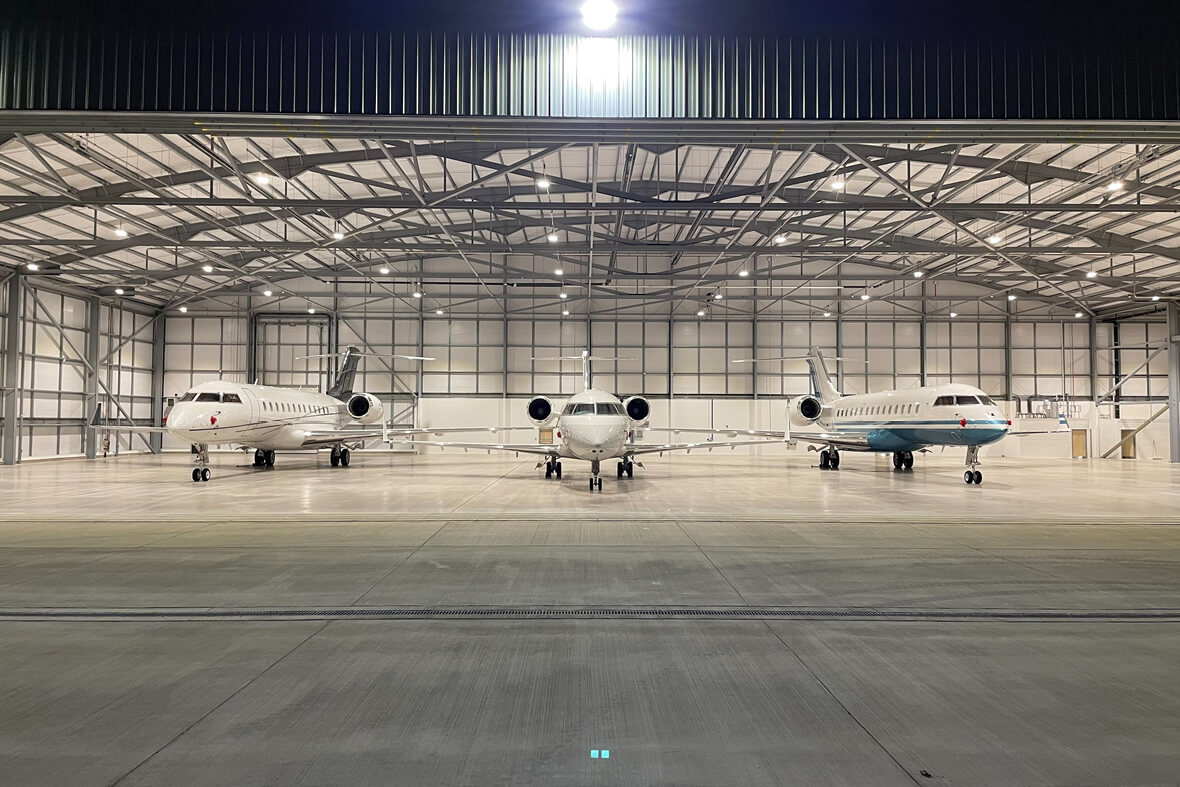 Always innovatively embracing the lighter end of general aviation alongside its bizjet and helicopter activity, London Oxford Airport is adding and renewing infrastructure ready for a bright future

During 2021, London Oxford Airport saw its average number of daily business aviation flights increase by almost 40%, more than any other UK business aviation airport. In total numbers of daily flights, London Oxford was fifth behind Farnborough, London Luton, Biggin Hill and London Stansted, but of those, only Farnborough comes close in terms of growth, at 31%. In its modest, get-the-business-done-without-undue-fanfare way, London Oxford is therefore thriving and, including the general aviation and flying school activity that accounts for the overwhelming majority of its business, expects to achieve around 70,000 movements this year.
August 2021 was London Oxford’s busiest month in 15 years, while it had its busiest January and March for 15 years in 2022 (February was denied its fair share of activity by a run of severe storms). Meanwhile, the airfield owners are investing heavily in new infrastructure, focused on exploiting emerging opportunities and preparing an airfield that dates back to 1935 for a future that includes the emergence of eVTOL and other advanced air mobility platforms.
James Dillon-Godfray, Head of Business Development at the airport, says London Oxford is enjoying peak investment at the moment, with a number of fundamental changes and developments either implemented or in progress. “In the last year we built Hangar Number 15,” he says, “a 70,000 sqft facility capable of taking as many as six G650 or Global 7500 jets, with offices at the back. We expect to build more to the north of the airfield, starting around 2023 with a second facility adjacent to Hangar 15, which is already almost full of tenant aircraft.
“We’ve also built seven new helipads. We’ve a lot more helicopter activity than in the past, including aircraft from Volare Aviation and Airbus Helicopters, but also the Children’s Air Ambulance and National Grid.”
Looking to the mid-term, Dillon-Godfray imagines infrastructure in place to allow the rapid charging of electric aircraft at the helipads. An ambitious undertaking, it requires very high-capacity power supply and retractable charging points.
Perhaps reflecting the fact that wholesale electric aviation is decades distant, London Oxford has also invested heavily in a new fuel farm, almost quadrupling capacity with two 85,000-litre tanks and with space for three more, one of which is expected to become available during the summer. The facility is ready to accept sustainable aviation fuel.
London Oxford aims to be as flexible and available as possible to its business aviation clientele, a policy that led to an upgrade providing Category 6 fire cover during all operational hours – essentially 6am to midnight seven days per week as required, hours that few other airports can match. It means that for the first time, Oxford can accept any aircraft capable of using its runway – effectively up to 737 BBJ class – with no notice. Such aircraft have visited London Oxford in the past but, significantly, in 2021 Embraer 190 and 195 jets chartered by the local proliferation of F1 teams were regular visitors.
Aside from Hangar 15 and its twin, other planned major airfield infrastructure changes include a realignment of the main taxiway, construction of a new fire station and the addition of an MRO facility. The latter is linked to the taxiway change, which will reroute around the MRO site, while also speeding up aircraft movements; an additional taxiway is also being built, from the runway midpoint. London Oxford averages 14 daily business aviation movements, but enjoys considerably more general aviation rotations, the majority of them from several based flying schools.

New infrastructure
The modern fire station will house three new fire tenders that are expected before the end of the year, while Dillon-Godfray confirms that a tenant for the MRO has been found. He was unwilling to identify the company but expects the facility to be complete late in 2023. In the main Oxford Jet Centre FBO, existing office space has been vacated to enable a new pilots’ lounge to be constructed, while other airfield buildings are also being repurposed, including a ‘terminal’ for light general aviation beneath the control tower.
Much of London Oxford’s continuing success stems from its willingness to embrace multiple aviation tenants, but it also engages keenly in the types of development to which the large areas of real estate characteristic of an airport lend themselves. Typically for a working airfield, London Oxford has some buildings and infrastructure dating back to the 1940s, while subsequent development has come and gone. Now it is building a science and R&D business park close to the airport entrance.
Several university towns have similar parks, housing start-ups that emerge from university research projects. “There’s an increasing demand for R&D laboratories and units in Oxford,” Dillon-Godfray explains, “where people want to be reasonably close to the city and university colleges.” The site’s ready access to business aviation is a significant bonus, as demonstrated in Cambridge, whose airport benefits from traffic generated by the city’s pharmaceutical and high-tech industries.
Dillon-Godfray reports early interest from aerospace and aviation companies, including eVTOL enterprises, while the adjacent Oxford Technology Park has already attracted an F1-connected organisation that is moving in to begin battery and electric motor development. Given the close relationship between electric technologies for the automotive and aviation industries, its position close to several car manufacturing and F1 facilities and, of course, the airfield, London Oxford Airport could become a leading next-generation air mobility hub.
The airport’s owners have unwavering support for aviation, guaranteeing that London Oxford will not go the way of Cambridge Airport, for example, which is scheduled for redevelopment away from aviation use. For now and the foreseeable future, Oxford’s business and general aviation ecosystem will remain at the heart of its activity.
Aviation companies continue to find the airport attractive and Dillon-Godfray notes: “On the MRO side we have Jet Maintenance International (JMI), focusing on Citations and Falcons, and also now a Tamarack retrofit centre for Europe and authorised Williams engine and Garmin service centre; RPM Aviation, specialising in the Citation Mustang; and MAC Aviation, supporting Bombardier models; while A2B Aero and, of course, Airbus Helicopters provide helicopter MRO. We also have a number of light general aviation maintenance companies.”
Volare Aviation, a company with a diverse business across the spectrum of MRO and operations, also calls London Oxford home, while Dillon-Godfray says that among other based aircraft operators, “We have Livingstone Skies with a Piper M600 single-engined turboprop on an AOC and available for charter, the Little Jet Company with several Citations and King Airs, and Executive Jet Management Europe (EJMI), the management and charter side of NetJets, with two Global Express aircraft.”

Viable alternative
The airport is clearly popular with aviation companies and its growing number of business aviation movements shows that it is a favourite with travellers, but does it really offer a viable alternative access point for London, whose centre is almost 60 miles away by road? The answer is a resounding yes, but the reasons why are not immediately obvious.
Dillon-Godfray explains: “We are outside the LTMA [London Terminal Manoeuvring Airspace], which is the busiest airspace in Europe. Aircraft coming off the airways, heading for airports inside the LTMA, may be directed into some quite convoluted routeings before they line up to land or, worse still, are put into a hold. That extra time in the air often negates the additional driving time of using Oxford and costs a lot more.
“Aircraft for Oxford come off the airways and nine times out of ten take a direct routeing straight to us, with no slots and no slot control. Business aircraft have priority over smaller aircraft here and after landing there is a very short taxi off the runway to the main ramp, where a car or helicopter can be sitting ready to go. From touchdown to driving out of the airport can be as little as four minutes and it’s the same driving into the airport to take off.”
For people who choose to drive between Oxford and London, the extra miles compared to its peers are deceptive, since the M40 motorway linking the cities is, according to Dillon-Godfray, the least congested and officially the fastest arterial route into London. “For those living in the north-west quadrant of London, including Kensington, Holland Park and Notting Hill, where much of the London-based business aviation clientele is, getting swiftly onto the A40 and then the M40 is far easier than the convoluted, tortuous urban crawl and busier motorways required to reach our competitors.
“All things considered, from starting point to finishing point on the overall journey, London Oxford can be advantageous and many people find it hassle-free and generally predictable. It’s also easy to make last-minute changes to schedules and, now that we are Category 6 fire capable all the time, even the biggest jets can chop and change without worrying whether we’ll have the right cover.”