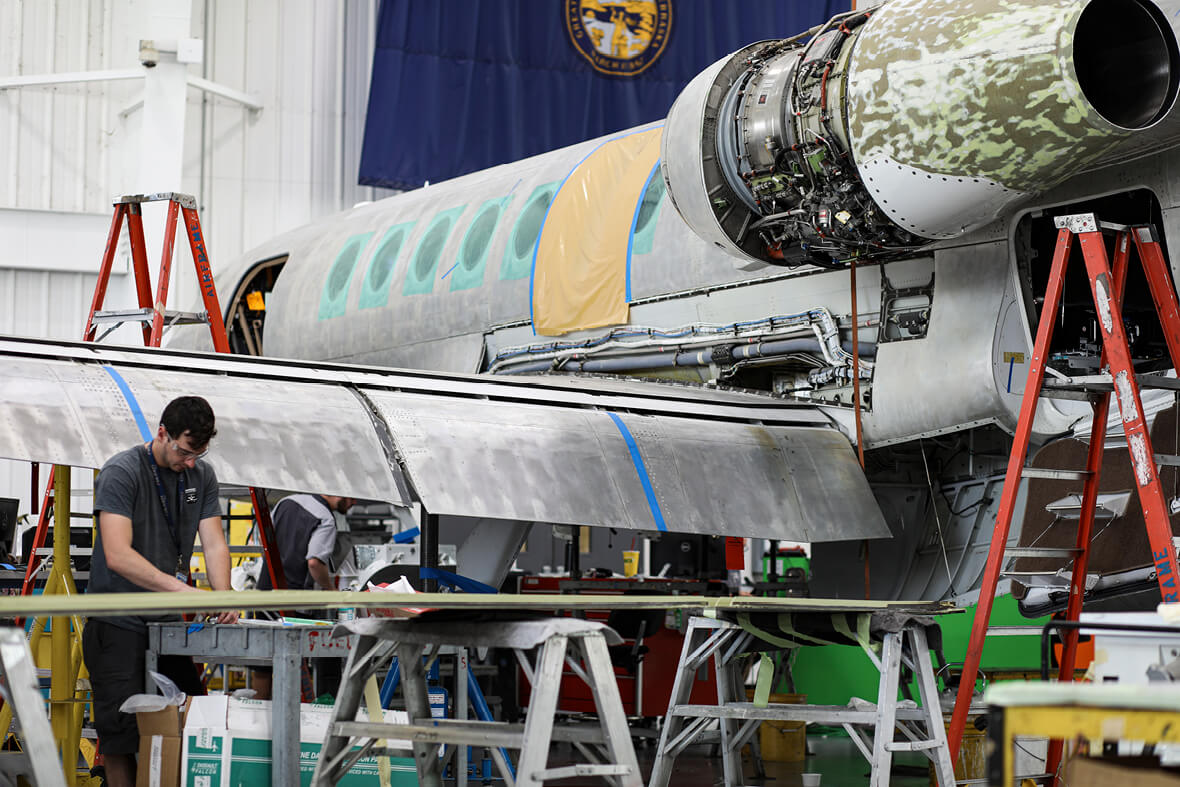 Carefully chosen, properly maintained and upgraded for regulatory compliance, an older aircraft can make sense to many owners. EVA asked a few leading MROs for their take on classic aircraft maintenance

With MRO facilities in Peterborough, Ontario and St Louis, Missouri, Flying Colours Corp concentrates on the Bombardier Challenger and Global family of aircraft, but supports other airframes too, including Dassault and Gulfstream products. The Learjet family has also been a regular over the years, but less so recently. Kevin Kliethermes, Director of Sales, notes: “No two aircraft are the same and the numerous variables affect the potential challenges: for example, the environment where they have been based, if they’ve been hangared, who has maintained them, and engine cycle times. We are invariably conducting a 96- or 120-month/C check on one or other of these types, so we know what to look for.”

Nate Klenke, Modifications and Design Sales Manager with Duncan Aviation, says: “We see aircraft as much as 40 years old, although our ‘sweet spot’ is providing services to aircraft in the five to 25-year range. Manufacturers are required to support the airframe over the lifespan of the aircraft, but parts availability can become a challenge, potentially causing increases in costs and downtime. From the modification perspective, ageing avionics may not have cost-effective upgrade paths and face obsolescence for systems that require complex certification programmes to meet operational mandates.”

So there are definite caveats and older airframes may pose maintenance challenges. A Gama Aviation spokesperson reiterates the thinking at Flying Colours Corps and Duncan Aviation, adding concerns over the cost of maintenance in terms of aircraft value, and more frequent inspections around structural integrity/corrosion. Nonetheless, he says: “Well maintained and correctly operated airframes will operate to end of life successfully.”

Debi Cunningham, VP Marketing at West Star Aviation is a big fan of older aircraft. “We love them because in some instances the OEMs don’t support older aircraft as well as they do the newer models. We really enjoy bringing in the classic aircraft and doing their maintenance, but not only maintenance, also a complete refresh, with new avionics, new interior, new paint.

“We are seeing several of the older model aircraft having a comeback with more customers interested in operating them. Their actual airframe maintenance stays the course of the aircraft, so they have the same requirements for maintenance intervals and due items as the newer aircraft.”

She admits that parts availability is sometimes challenging but explains: “In those cases we work with the manufacturers to get what’s needed. Thanks to our excellent relationships with many of the OEMs, we’ve also done major airframe repairs where aircraft have left us good as new.”

In some cases, of course, the OEMs continue robust support for their older models. Derek Zimmerman, President Gulfstream Customer Support, believes the company maintains and supports between 60 and 70% of the active fleet, with similar support package offers for purchasers of older models to those available for its new aircraft. “The easier part of that is the routine inspections, the trickier part where a customer may want to add discretionary funding to the package for unscheduled maintenance. The variation in that gets wider with age because you have to make allowance for aircraft history. Essentially though, a package allows customers to budget because they have a good idea what they’ll need to spend over time.”

Upgrades and STCs
West Star is not alone in offering upgrade options, but its historic work on the original Falcon 50 was particularly ambitious. “We worked with Honeywell on a 50-4 programme,” Cunningham recalls. “Honeywell designed an engine upgrade for the Falcon 50 that took the TFE731-3 engines to -4 configuration. We developed the STC for the installation on the airframe, bringing the older Falcon 50 up to the performance level of the Falcon 50EX, with a more reliable engine, reduced fuel burn and faster climb to altitude, which again saved fuel. Then we paired the engines with the Collins Pro Line 21 cockpit upgrade, new interiors, new lighting and new paint. We did ten Falcon 50-4 retrofits.”

Other popular upgrades include winglets, avionics updates, some of them mandatory, and cabin refurbishment, including connectivity and IFE installations. Nate Klenke notes that Duncan Aviation holds several connectivity STCs and since it holds an FAA Organization Design Authorization, it is also able to develop STCs for systems that may not be available in the cabin and/or on the flight deck.

Jeff Hutcherson, Director of Operations at StandardAero Business Aviation, reports that many options exist for high speed data and he believes StandardAero has installed them all. “Cabin management systems and high-speed data are in demand but operators shouldn’t forget avionics needs on the flight deck of older aircraft. These can often be the most needed, and most costly.” Surprisingly, he cautions: “Multiple configurations exist, often specific to an aircraft serial number.”

Gama Aviation’s extensive approvals and vast experience, especially with the King Air and Challenger, enables it to design cockpit retrofits, manufacture any parts required and install them under Part 145. “We can do everything from non-integrated ADS-B solutions through to full glass cockpit changes,” the spokesman notes.

The company is perhaps best known for its long association with the King Air, of which the oldest example it currently sees is a 1979 Model 200, with 13,900 hours total time. The aircraft has received engine, airframe and avionics upgrades, in common with the most aged of Gama Aviation’s Challengers, a 601, manufactured in 1984. Older Hawkers, Challengers and Globals are no strangers to Gama Aviation’s MRO facilities in Bournemouth, UK and Fort Lauderdale, Florida, either.

Think twin-turboprop business aircraft and it’s likely the King Air springs to mind, but Cessna achieved some success with its Conquest II. Built until 1986, the type remains popular and has been the source of considerable upgrade work at West Star Aviation. Its TPE331-8 engines were upgraded to -10 standard and Debi Cunningham recalls that four conversions per month frequently went through West Star’s Grand Junction, Colorado facility in the 1990s; often the exterior paint, interior and avionics were also refurbished. The programme remains active through West Star’s STC.

Airframe modifications may also go a long way towards improving the operating economics and performance of an older aircraft and winglets are an obvious addition. Many MROs have winglet capability but, as an authorised Aviation Partners installer, Duncan Aviation, for example, has fitted more than 100 pairs on Falcon 50, 900 and 2000 aircraft.

“We encourage flight deck refurbishments as this gives a new lease of life to an aircraft perhaps first launched to market 25 years ago. For example, we are installing Collins Aerospace Pro Line Fusion avionics on Challengers, updating connectivity systems on Global XRS/Express models to Ka-band, and installing Collins Venue management systems in the cabin.”

Aside from essential avionics upgrades and the comfort of a refurbished cabin, connectivity perhaps plays the greatest role in refreshing an aircraft from the passenger perspective. John Miedwig, Director, Certification Services at StandardAero Business Aviation, says: “We routinely develop STCs in support of ageing aircraft and in many ways their updating is core to StandardAero’s modifications business. We regularly develop STCs to support cabin upgrades, glass cockpit retrofits, satcom installations and high-speed broadband, to name a few.”

Mike Creek, the company’s Avionics Technical Manager, explains: “We are seeing a lot of upgrades replacing ‘obsolete’ equipment, including replacing cockpit cathode ray tube displays with new liquid crystal displays [LCD]. The new LCDs incorporate additional technology that allows for synthetic vision, charts/maps, XM Weather and video to be displayed, bringing information that used to be on an electronic flight bag to the fore.
“On the connectivity front, Gogo has developed the Avance L3/L5 platform, which replaces the older ATG system and provides a faster internet experience above 3,000ft. There are also several solutions for Ku and Ka used for video streaming through taxi and all phases of flight. Customers are not necessarily looking for the fastest aircraft, but the aircraft with the fastest internet.

“We are also seeing customers take advantage of new technology in the cabin by upgrading the cabin management system to interface with the latest devices on the market, with HDMI ports and USB charging. A customer can take an Apple TV or other streaming device and plug into the HDMI port to display on the cabin monitors. That same device can then connect to the internet through the Gogo Avance L5, Ku or Ka systems for video streaming, just like you would at home. It’s really amazing how far we have come with connectivity in the last 20 years. Back then, getting a fax to work seven out of ten times was good, now customers are able to stream video and use FaceTime.”
Owning and operating an older aircraft successfully comes down to the machine’s history, quality maintenance, avoiding obsolescence and upgrading. With an eye to US purchasers, Jeff Hutcherson concludes with some advice from StandardAero Business Aviation. “Some aircraft age better than others, but I’d say pick one with avionics systems that are either still supported or have a clear upgrade path; avoid airframes with low production engine models, which can be very expensive to maintain; avoid aircraft that have been based in wet/salty environments; and if the aircraft has been operated outside the US, check the fuel tanks closely for corrosion during the pre-buy. All the major OEMs have older aircraft they continue to support well and if properly maintained they can offer good value compared to purchasing a new aircraft.”