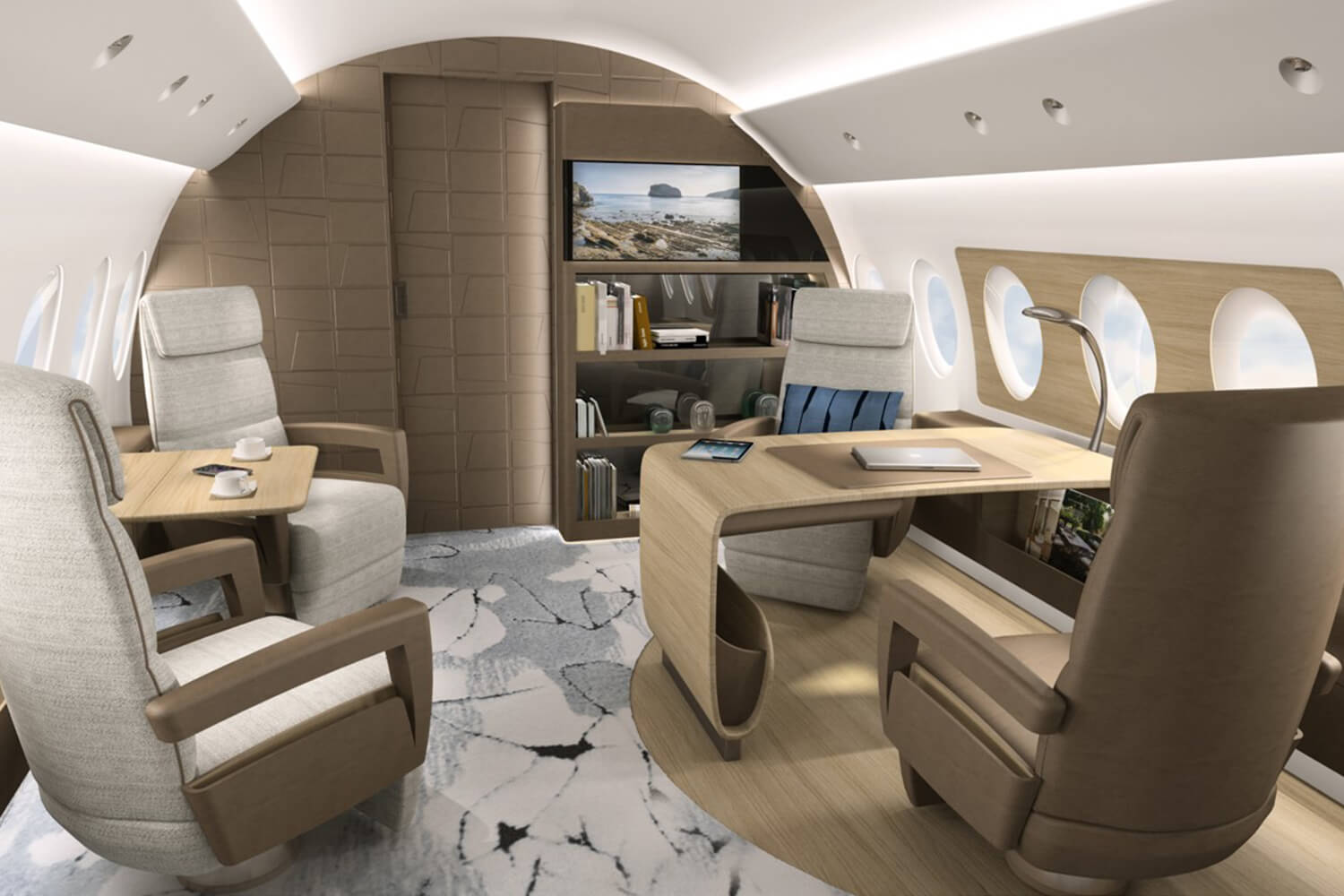 Ultra-modern avionics, long range and great field performance made the A220’s potential as a VIP aircraft obvious long before it became an Airbus product. Developed and delivered into airline service as the Bombardier CSeries, the aircraft became a truly serious commercial proposition under Airbus stewardship.

Stephen Vella, CEO of Kestrel Aviation Management explains: “Our quest is to find platforms that are good baselines for cabin conversion. Many of the challenges are in adapting innovative designs to the technology of the aeroplane.” The BBJ737 is based on an airframe originally developed in the 1960s, the ACJ320 series on a 1980s’ design and, Vella reveals: “When we saw the emergence of the CSeries, in particular the -300, we realised the advanced nature of the aircraft.

“I was doing some work on the commercial airliner and during a deep dive into the technology I became more and more interested. So we invested in a project to see just how good a platform it would be for a corporate jet. Tom, Jacques Pierrejean and I got together at that juncture and began an interface with Bombardier, which was very supportive. We were invited to visit the production line and examine how the aircraft was built. We realised it was a ‘peach’ for adopting a bespoke cabin, not least because most of the wiring, ducting and plumbing was under the floor and there were readily useable structural attachment points. But, more importantly for maximising the perceived width and height of the cabin, we could push the linings all the way out to the structure.”

Interestingly, Vella says the A220’s long range is useful but not essential to the VIP market, particularly in the Middle East, where average ACJ and BBJ flights are 2.5 hours. “We wanted to create an aircraft more suitable to those cycles but also capable of the key missions – Middle East-Europe, US east coast-Europe and US coast-to-coast. Some of Asia’s longer sector lengths present a challenge, but that’s true for many of the current corporate platforms. But the A220 is really light and has blistering field performance – you can take-off from a short runway and fly for six hours.” It’s performance that also translates into exceptional hot-and-high capability but, most of all, the A220 offers ‘proper’ living space.

Chatfield notes: “The A220 is slightly narrower than a 737 or A320, but much longer, so the floor space of a 737 MAX 7, ACJ319 and A220 are almost identical. The same is true of the cabin height. A combination of design and aircraft characteristics makes the cabin seem wider and taller, while its length means we can install an extra zone compared to its competitors. And that’s a big bonus for a client.”

Too Much, Too Long
In looking at the A220, the project’s primary aim was to address the common grumbles from the VIP and corporate customer base. Vella says he frequently hears: “Your green aircraft is putting too much risk on our [the owners’] shoulders, it takes too long, it costs too much. They often want something with lots of space, but more akin to the offering from a Global, with a preconfigured cabin and choices to be made on materials. We wanted to find an intermediate sweet spot between those two offerings, including finding a midpoint in terms of time taken and price.”

The result is a modular, plug-and-play concept, initially designed for the A220 but obviously adaptable to any suitable platform. “The A220 was by far the easiest to cut our teeth on, but the concept could be adapted to the MAX and neo,” Vella notes. Customers will choose from a catalogue of module configurations, each of which will be customised to suit individual requirements and aesthetic choices.

As it applies to the A220, the concept arranges seven zones around three fixed areas. Those fixed zones are the entrance area, including crew lavatory, galley, wardrobe, forward buffet and emergency equipment stowage, and a generous mid-cabin VIP washroom, located just forward of the wing box where, Chatfield says, “the plumbing works wonderfully and it makes a nice visual demarcation point.

“We decided to put the private suite, the third fixed zone, at the back,” he continues, avoiding the need to waste space providing a corridor around it. The remaining four zones are variable. “Three are the same size, the fourth slightly larger. They enable the aircraft to be configured to customer wishes. In our concept we configured the first as a lounge area, but club seating or as many as 15 economy seats could also be installed. And, because it’s modular, the area can be reconfigured overnight.

“Traditionally, the largest, third section would be for dining or use as a conference room. Zone five might be an office, media lounge or children’s bedroom. Again, with the modularity, when the children are grown, the module can be swapped out for a pre-engineered replacement during a future heavy maintenance event.”

Concept to Reality
While Camber, Kestrel and Pierrejean are the headline stakeholders in the A220 concept, F/LIST and Flying Colours Corp are also involved. “As we got deeper into a design,” Vella says, “we went to places where they have capability that we don’t. Tom and I had worked with F/LIST on previous cabin innovations, and particularly well on Kestrel’s BBJ787. They are of the same mindset as us and with their very advanced technology we naturally brought them in to fabricate the cabin.

“For the integration and certification we wanted a partner that had strong experience with Bombardier. We looked at two possibilities and chose Flying Colours, based on their proximity to Bombardier and the vast amount of subcontract work they take on from the OEM.” On delivery, the green A220 would go to Flying Colours’ Peterborough, Ontario facility for completion, using F/LIST cabin components manufactured in Austria.

“Our emphasis is on capability rather than brand, so Tom, Jacques and I would be the initial contact point for customers and I expect to see them working closely with Jacques on detailed aesthetic customisation – leathers, veneers and so on. That’s his forte. I’ve worked with him since 1998 on several large-cabin aircraft, introducing the ideas of minimalism, space and visual journey through design elements. The magic of Jacques has been in taking those concepts into a narrowbody. He’s ace at doing that and Tom and I are here to facilitate his creativity.”

Lifetime Aircraft
Given the unusual state of the market, neither Vella nor Chatfield would be drawn on whether their modular cabin will first see light of day in an A220 or with a customer refreshing an alternative narrowbody aircraft, but Vella was happy to reveal that dialogue was ongoing with both types of potential customer.

Between them, Camber, Kestrel and Pierrejean have developed a cabin concept that will last a lifetime. Its modular design lends it to cost-effective refreshment or complete replacement, either as a whole, or module by module. The potential for easy reworking promises to bolster used aircraft values, while the promise of easy conversion – between lounge space and regular airline-style seat rows, for example – adds a degree of hitherto unknown versatility.