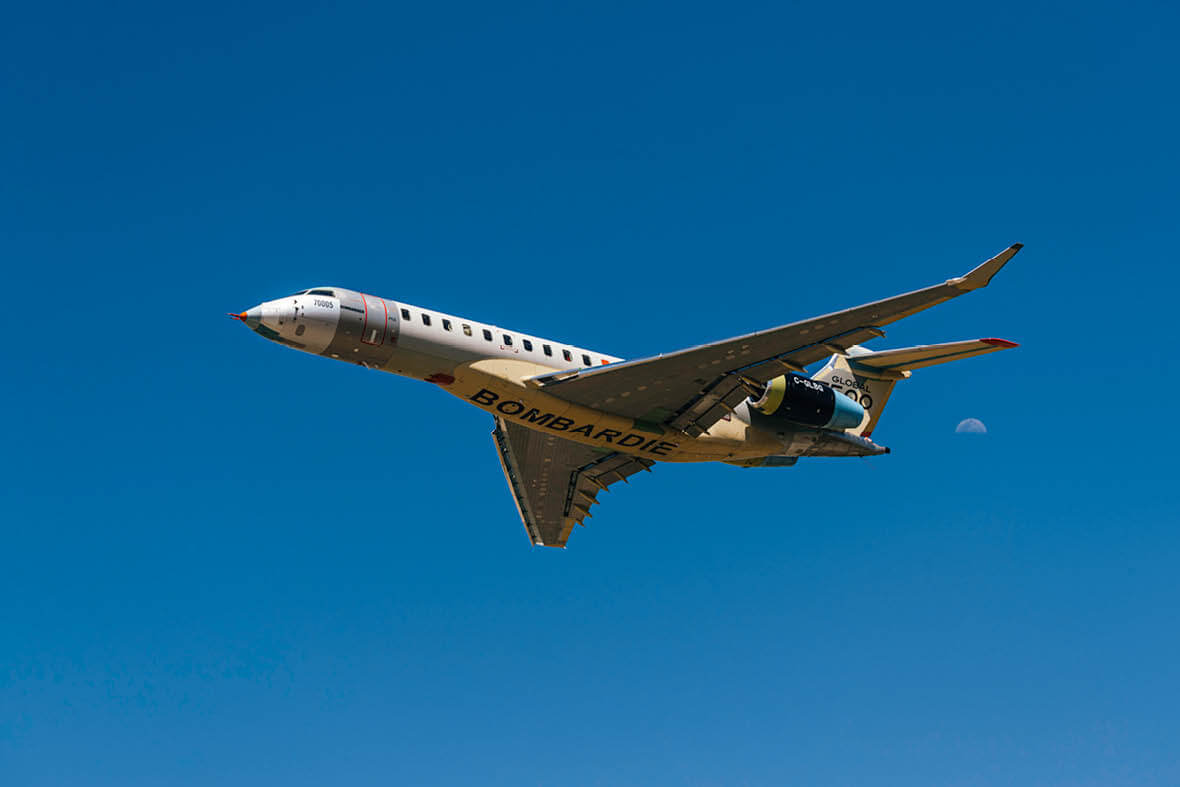 EVA spoke with Stephen McCullough, VP Engineering – Chief of Aircraft Design and Development at Bombardier, to find out how the Global 8000 builds on potential designed into the Global 7500, and how Global 7500 customers will be able to upgrade their in-service jets

Bombardier made a song, but not a dance, over the Global 8000 launch at EBACE in May, when even an audio problem did nothing to detract from the fact that not only had the OEM been conducting its flagship test programme in secret for more than a year, but it had also flown the jet beyond Mach 1.
Keenly anticipated as the even longer ranged stablemate of the ultra-long range Global 7500, the Global 8000 was at last a reality. But it is more than a longer-legged 7500: the Global 8000 is faster and, remarkably, will be available as a new-build aircraft or by upgrade of Global 7500 jets already in service.
The video premiered that Geneva morning is now available on YouTube. Shot on 21 May 2021, it shows Global 7500 Flight Test Vehicle 5 (FTV5), known internally as ‘The Masterpiece’, achieving Mach 1.015 in Global 8000 configuration. The milestone was an inevitable requirement of certifying the latest Global to a maximum speed of Mach 0.94; it was demonstrated more than once and achieved using sustainable aviation fuel.
Some in the audience may have walked away believing Bombardier had created the world’s first supersonic business jet, a misinterpretation that should not be allowed to distract from the fact that the Global 8000 will cover 8,000nm at Mach 0.85 compared to the Global 7500’s maximum of 7,700nm at the same speed. There is no change in fuel tank size between the platforms, yet the 8000 carries more fuel.

No compromise
Stephen McCullough, Bombardier’s VP Engineering, previously worked on the company’s original Global programme, Challenger and CRJ900 regional airliner. He says the evolution of the Global 8000 from the 7500 is a natural progression based on the excellence of the original design. “There was no compromise when we designed the 7500. Its wing was optimised for low and high speed. We did lots of work in the wind tunnel. Think of the 8000 as tapping that extra bit of potential the 7500 always had.”
Mark Masluch, Bombardier’s Senior Director, Communications, adds: “When we started on the Global 7000, which became the 7500, we knew we were developing an aircraft that would be the flagship for 20 or 30 years, and there was some future proofing built into that. After more than 120 customer deliveries the aircraft is established in service, we’re getting great feedback and it’s showing good reliability. Most of the aircraft are on our Smart Link Plus programme, gathering data and providing a really good sense of how the fleet is performing. The engineers crunch those numbers and that also helps unlock potential.”
But how is that potential realised? “Predominantly software changes in multiple areas,” McCullough explains, “and we’re looking at a minor engine thrust increase for cruise, although take-off thrust is already sufficient.”
And what about the mystery of how a jet can carry more fuel in the same space? “Fuel quantity is not just about the ability to store fuel. It’s also about what you do in terms of the space above the fuel, the ullage space. A lot of fuel management is about making sure the fuel vent system, for example, works properly under all conceivable conditions. It’s also about the repeatability from building a number of aircraft, knowing you can guarantee consistent fuel quantities. There’s quite a bit of science around managing fuel quantities too.”
Moving on to discuss the supersonic test flights, McCullough clearly enjoys explaining how an essentially routine trial was performed, even after confirming that modern flight test is really about validation. “We have a predicted outcome and, in that sense, it is validation, but we hadn’t been beyond Mach 1 before and we needed to go into that regime. Our demonstration of compliance meant we needed to go beyond the normal envelope and to clear the Global 8000 to Mach 0.94 we had to go Mach 1.015. It was a challenge to find an aircraft that could keep up and provide a calibrated airspeed indication. We ended up going to NASA and asking for an F/A-18 Hornet.”
The supersonic flight occurred a year before the Geneva reveal and while McCullough admits that keeping it quiet was perhaps more challenging than the test itself, Mark Masluch and Mathieu St Cyr, Bombardier’s Manager, Sales Engineering, were happy to relate the internal debate that went on at the time. Should they go public with the fact that the Global 7500 had untapped performance that could take it beyond the ‘sound barrier’, or should they wait until a complete package announcement for what would become the Global 8000? The latter argument won through.
McCullough was happy with the decision. “The Global 8000 story is more than the supersonic test. It’s about taking a mature product to market, and we’ve done several more tests and used 7500 fleet service data to be able to do that. It means we can provide a robust demonstration to show that what we say we’ll do is what we’ll deliver.”

Executive cabin
With the Global 8000 programme in full development and the first Challenger 3500 delivery in September, 2022 has been a busy year for Bombardier, but it has not forgotten the incremental improvements that make so much difference to its customers. At the company’s Orlando press conference, Bombardier President and CEO Éric Martel was very pleased to reveal a new Executive cabin configuration for the Global 7500 and 8000. Optimised for corporate customers and created in direct response to their feedback, it provides a three-zone cabin and ‘open office’ feel for better collaborative working and conferencing. Non-structural cabin bulkheads are moved to facilitate the Executive cabin, which is offered as an additional choice alongside the more conventional four-zone configuration.
At the same time, Martel unveiled the Nuage Cube, an unusual piece of furniture closely following the design ethos of the sublime Nuage seat. Its light weight, evident in the way Martel handled it during a pre-press conference photo session, gave the superficial impression that the Nuage Cube was an oversized plaything. In fact, it is multifaceted and surprisingly stable. Easily rotated onto different sides to form a stool, foot rest or table, it is delightfully easy to move around the cabin and supplied as a pair. It can be stowed for landing, take-off and taxi, and when otherwise not in use, in a purpose-designed credenza.
When the Global 8000 is delivered, its type certificate will show the same BD‑700-2A12 model number as the Global 7500, but ‘Global 8000’ will appear on the type certificate data sheet as a subset designation. A service bulletin will apply to Global 7500s modified to Global 8000 standard, defining and verifying the upgrade, with implications for aircraft resale value. St Cyr says Bombardier’s worldwide service network will be responsible for the work.
He also explains that the first production Global 8000 will appear slightly before the retrofit programme begins and that service entry is on track for 2025. Like Stephen McCullough, he exudes confidence in the Global 8000’s capabilities and excitement over bringing an extraordinary aircraft to market. “You’re only a leader when others follow,” he says. “Otherwise, you’re just going in another direction.”