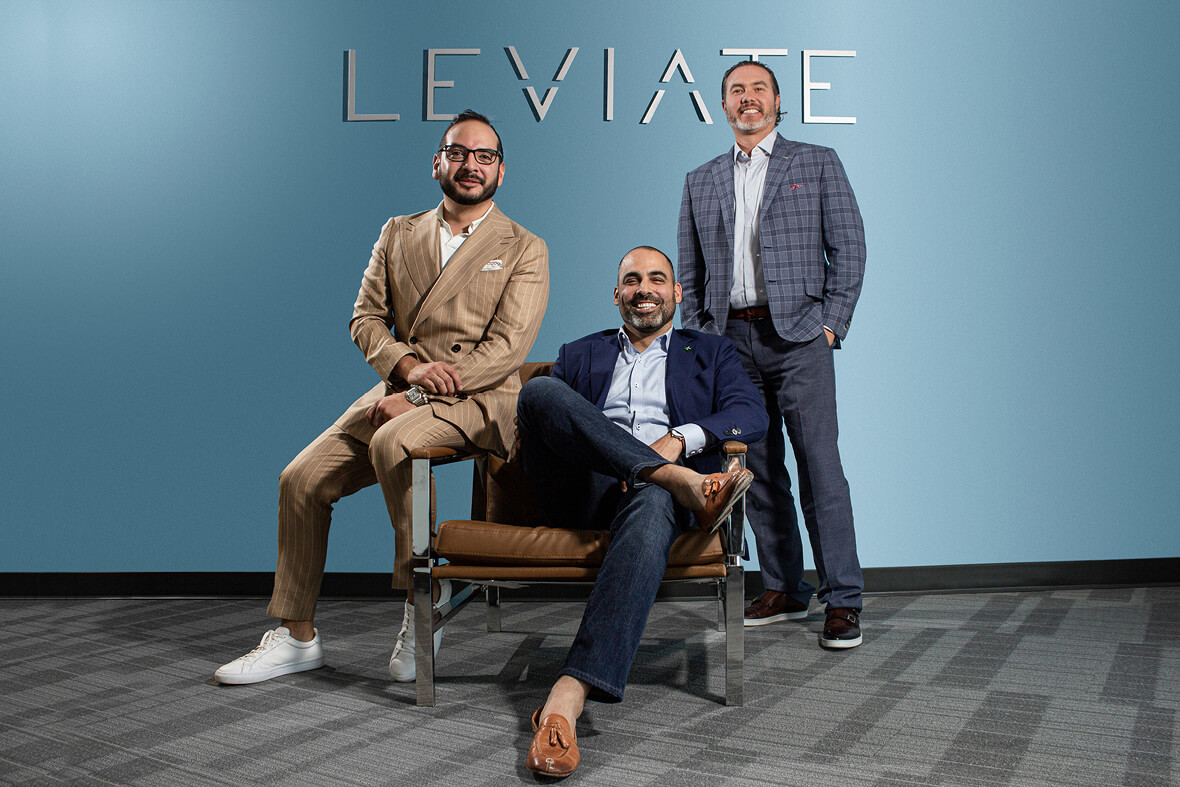 Expert in charter, aircraft sales and aircraft management, the team at Leviate Air Group is all about customer relationships and doing business the right way

Leviate Air Group CEO and co-founder Luis Barros oversaw creation of the word ‘Leviate’ as a combination of ‘levitate’, ‘aviate’ and ‘elevate’. The resulting name suggests a multifaceted aviation company. And, indeed, Leviate Air Group is at the same time a charter, aircraft sales and aircraft management company, excelling at all of those things.
Barros created the company in 2014, with the aim of constructing a new type of private aviation provider. Industry veteran and Managing Partner Rob Rosenberg joined in 2015, to lead Leviate’s air charter division, and President Randall Mize arrived in 2016, to head up aircraft management and sales. The result, recognised for exceptional growth on the Inc. 5000 list in 2021, is essentially three expert companies in one.
Key to Leviate’s success is the disparate backgrounds of its senior leadership team. A graduate in aviation management, Barros began his career as a dispatcher, later moving into charter sales, gaining the expertise with which he established Leviate’s charter business. With more than 3,000 hours piloting a variety of business jets, Mize brings crew perspective and operational know-how to the company, while Rosenberg has an extensive background in sales.

Company ‘Levolution’
Barros explains the company’s evolution: “Leviate began as a charter sales outfit in 2014/15, but really came together in 2016/17 when we added the aircraft sales side with Randall.”
“I got out of the cockpit in 2012,” Mize continues. “I hadn’t thought of doing anything other than flying, but the company I worked for was sold and I didn’t have a job. The owner of Starbase Jet, now one of our aircraft owners, said, ‘Hey, you should work with me and do aircraft management’. Turns out I was good at it. The fleet grew from five aircraft to 30 in five years before we broke away, ultimately acquiring Starbase in 2017.”
Rosenberg also worked at Starbase and having purchased the company, the three men combined their charter sales, and aircraft sales and management skills with the operator’s Part 135 licence, creating Leviate Air Group. Having weathered the worst of the pandemic, Mize says the goal now is to build towards a managed fleet of as many as 50 aircraft and a company that people want to work with. The Part 135 purchase gave Leviate a global operation centred on large-cabin and super-mid-size business jets. “We already had a US$10 million charter sales group, now about three times that per year, and it complements aircraft management really well,” Barros concludes.
Compared to his colleagues, Rosenberg had very little aviation background, but lots of sales experience. “I worked for my dad. We had 23 retail stores dealing in high-end fitness equipment, so I had lots of face-to-face selling experience. I’d known Randall pretty much since eighth grade and that’s how I found my way to Starbase after my dad sold the company. This was 2012 and Luis was director of charter but planning to set up Leviate in Dallas. I became one of the new company’s first hires.”
Leviate performs well in each of its chosen business areas and there are clear specialities within its segments. “We could dabble in management on smaller aircraft or turboprops, but our management programme is for larger jets on worldwide ops, Argus Platinum and IS-BAO II rated,” Barros states.
“And our aircraft sales aren’t just a pilot doing sales on the side: Randall’s an IATA-certified broker. Same thing with our charter: it’s Argus registered, carefully managed and could be a reasonable mid-market brokerage in its own right.”
Rosenberg adds: “There are few companies that do all three and with those aspects in-house, we successfully feed clients up the chain through charter to aircraft sales and then management.”

Part 135
Barros, Mize and Rosenberg refer to ‘Part 135’ (FAA certification for commercial, non-scheduled operations) frequently in conversation and the certification is mentioned often on Leviate’s website. What does it mean to the company? “With federal oversight, the certification process, ongoing audits and more, it’s all about credibility. It shows us as a very knowledgeable, credible aviation organisation,” Barros says.
“It’s the same on the aircraft sales side,” Mize confirms, “where people see us as a worldwide air carrier and it lends credibility to the sales.”
Leviate has invested heavily in systems and international partnerships to ensure its charter customers receive the highest standards of service wherever they are. Barros says: “When we charter in Europe, Asia and North Africa we use trusted local brokers who know those markets. Client retention is more important to us than making as much money as we can. We are happy with lower margins because someone is involved in the middle, so long as the client receives service in line with an Argus Platinum operator. We know our reputation is everything.”
Another important component of reputation is communication and client relationship, which is why, Rosenberg says, attending shows like EBACE and NBAA-BACE is so important. “It’s also about our relationship with our operators, helping us work with them to deliver a better service to our customers.”
Barros concludes with a pragmatic outlook. “We want to do business the right way, founded on long-term relationships with a good culture both inside and outside the company. It’s especially true on the charter side. It’s easy to set up as a charter broker with only a laptop; that’s why people sometimes hear ‘charter broker’ and cringe. We’re the opposite and that’s been Leviate’s policy since day one.”