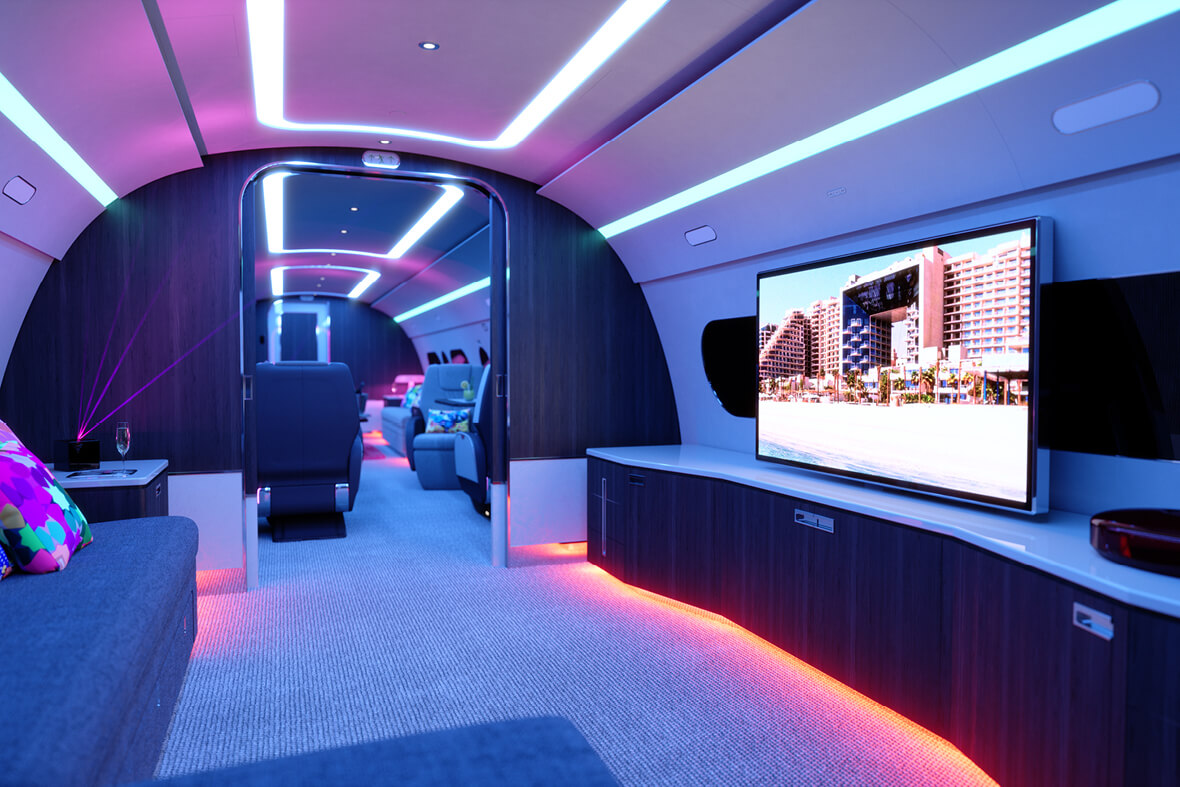 While a large-cabin, airliner-based jet will never match the outright speed of a purpose-designed aircraft, there are considerable benefits in comfort and living space to be had, as executives from Camber Aviation Management, Comlux, Greenpoint Technologies and Lufthansa Technik confirm

Nothing beats a large cabin, airliner-based VIP or VVIP aircraft for comfort and space. Ranging in size from regional jets all the way up to the 747-8, large cabin jets also provide unique cabin design and engineering opportunities.
Annika Wicklund, Design Director at Greenpoint Technologies, provides a designer’s perspective: “Widebody aircraft, including the Boeing 787 and 777, offer ample space, range, and comfort to complement endless design possibilities. Due to their size, the ceilings of these aircraft may be higher, allowing larger dedicated amenities, such as workout facilities or a wellness area. A master suite on a widebody often includes a spacious shower, walk-in closet and double vanity.
“But the 737 is also a significant airframe with huge potential. Narrowbody aircraft include many widebody features by implementing an adaptable layout, including a lounge convertible to a dining room or an office doubling as a guest suite. Narrowbody aircraft can feel very intimate and clever through innovative design solutions.”
“Over almost 35 years, Greenpoint has delivered turnkey interior completions, refurbishments, and reconfigurations of narrow and widebody aircraft for private individuals, corporations, and heads of state,” says Chad Thorne, VP Sales & Marketing. “We have a long history of working closely with Boeing and as one of the original licensed BBJ completion centres, Greenpoint has designed and delivered specialty interior systems and modifications for almost every Boeing commercial model. We are now also working with multiple Airbus clients and looking forward to completing our first ACJ interior.”
Greenpoint’s work is typically for VVIP and head-of-state customers. The latter may have mission requirements defining aspects of the equipment fit and accommodation, but the completion process is similar, as Wicklund explains: “While head-of-state and VIP clients may differ in layout arrangements, materials, and features, they both require exceptional quality and attention to detail. The most important step is to collaborate closely with the client to thoroughly understand their needs, mission requirements, and design vision. Heads of state often have experienced crew, operational teams, and previous aircraft to reference, which drives active problem solving to refine interior features.”
And though there is more to travel experience than space alone, for those seeking the ultimate in roomy interiors, nothing beats the 747-8, for which Greenpoint has a unique configuration. “Anyone who has flown on a 747-8 knows the expansive feeling of the interior,” Wicklund says. “There are very few aircraft that have two stories, four galleys and ten lavatories. The 747-8 offers limitless design possibilities, including Greenpoint’s unique Aeroloft. Sleeping eight VIP guests, the Aeroloft provides private guest suites above the main deck; it is installed on five head-of-state aircraft flying today.”

ACJ TwoTwenty
Richard Gaona, Executive Chairman & CEO at Comlux, says that for every business and VIP aviation mission there is an appropriate aircraft. The case for airliners depends on many factors, some more obvious than others. Compared to an ultra-long range conventional bizjet, for example, he says the ACJ TwoTwenty offers comparable 12-hour endurance, considerably more space and lower maintenance costs. The appropriate size of aircraft may also depend on who is flying and how they wish to travel. Gaona notes that a couple and their entourage once had more then 250 bags loaded onto a Boeing 767.
A newcomer to the airliner-based VIP/VVIP jet market, the ACJ TwoTwenty offers a unique proposition. Airbus contracted Comlux to complete the first 15 aircraft and although the latter expected to own and operate the initial pair itself, these were recently sold. The ACJ TwoTwenty cabin concept is modular, enabling considerable flexibility within a ‘catalogue’ of mix-and-match cabin sections.
“The aircraft is configured with the galley forward and bathroom aft,” Gaona explains, “leaving four zones in between where customers may choose which modules suit their mission best and where they should be installed. It’s even possible to fit two of the same module, in different positions, if they require. So far all have chosen to place the bedroom at the back, with the bathroom including a shower, but then the remaining three zones are quite different, especially in terms of colours and materials.”
Airbus and Comlux jointly announced the ACJ TwoTwenty’s launch a year or so ago, since when new technologies are already reflected in the initial aircraft about to emerge. Among them, the chromatic windows are more typically found on widebodies. “They’re quite amazing,” Gaona says. “No more window shades. Instead, at the touch of a finger the window goes dark. High-speed internet is also installed, with streaming enabled to personal devices as well as cabin monitors.”
Like Greenpoint, Comlux has an enviable reputation for its large cabin completions. Among its many success stories, the SkyLady Boeing 767 was refurbished in summer 2020, with high-speed internet, an ionisation system and all-new cabin. Also operated by Comlux, the aircraft is popular with customers looking to celebrate special occasions, typically a wedding or birthday. With 50 passengers embarked, each pays around the price of a first class airline ticket, or less.
Having experienced a party trip as a guest on the aircraft, Gaona has first-hand experience of how its flexible accommodation is used. “The principal travelled at the front in the private suite, but during the flight everyone was moving around the cabin and although there were 25 passengers and most had a first class seat, I noticed people sitting on the floor and talking. We have other aircraft offering a similar experience, configured, like the 767, so that they could be head-of-state jets, but also perfectly suited to private groups.”

Sensible, stylish solutions
Camber Aviation Management and its partners won a 2021 International Yacht & Aviation Awards design et al Award for their modular A220 VIP cabin concept, one that CEO Tom Chatfield notes could equally apply to an A320 Family or Boeing 737 narrowbody. He says the award is hugely significant since the people voting in the design et al categories are usually from within the industry.
When customers come looking for a way into the large cabin VVIP market, Chatfield explains that there are multiple routes to securing not only the aircraft they want, but the aircraft that best suits their mission. Large cabin business jets are typically acquired as green airframes into which the fully customised cabin is installed, or as fully furnished aircraft ripe for refurbishment or refresh, but a select few previously served as airliners. Given the relatively few hours a VIP jet flies compared to an airliner, a relatively low-time ex-airline machine can represent a cost-effective solution to large-cabin ownership.
Chatfield also notes that an owner flying most of their missions within, say, a 4,500nm range, has only an infrequent requirement for extreme range and no real reason to spend extra to achieve it. “Owners have all the benefits of a more comfortable, larger airplane on 90 to 95% of their missions, while factoring a fuel stop for truly long-range flights. It takes maybe an hour to stop for fuel and could save tens of millions of dollars. When I speak to customers, I advise them to think carefully if less than 10% of their flying is over extreme ranges.”
Saving money doesn’t mean accepting second best. Chatfield says: “When we refurbish an aircraft we’ll apply a new livery, polish it and ensure the cabin is perfect, reflecting the new owner’s needs and sense of style. If they don’t know, people are convinced these aircraft are new. And ultimately, there are benefits in terms of value proposition, much shorter outfitting times and, of course, lower cost.
“Imagine a customer seeking a BBJ. We’d scan the market for one with a good pedigree and a cabin similar to the customer’s ambition. The aircraft might cost $20 million and the refit $10 million. That’s a $30-million airplane available for delivery in less than a year, and the customer may be able to fly it unchanged while the cabin elements are engineered. And looking at the green, or sustainability aspect, repurposing an aircraft uses far less energy and raw materials than buying a new one. Right now we’re seeing quite an interest from clients wanting to follow this route and we’re working with them to make their acquisition as efficient as possible.”

Explorer Concept
A veteran of large-cabin completion and refurbishment for VIP, VVIP and head-of-state customers, Lufthansa Technik (LHT) is never shy of innovation. Yet it’s latest concept, the Explorer ACJ330, is on the dramatic side of unusual even by LHT’s own high standards.
Jan Grube, LHT’s Sales Director, VIP & Special Mission Aircraft Services, says the Explorer takes its inspiration from superyachts, allowing owners to go almost anywhere at any time while also serving as a luxurious boutique hotel ‘base camp’ for off-ship activities. The baseline A330 offers all the space and performance required for such a mission, but with the advantage of being able to reach the other side of the globe in just a few hours.
Presenting an Explorer configuration for 12 passengers at the recent Dubai Airshow, LHT included a spectacular projection concept. Grube provides details: “For the wall and ceiling projections we worked closely with Diehl Aviation to integrate one of its existing projection systems. Depending on the IFE system installed, it’s not a major challenge to tailor the projections to other IFE components, including the aircraft’s surround sound system, while the projection content can also be individually altered, for example to allow streaming video.
“The audio-visual possibilities are wide, extending from the acoustic ‘swoosh’ of a virtual shark passing overhead, to a full disco. Live experiences, including outside views fed by external cameras, while gaming or even the display of crypto art are possible.”
‘Toys’ – helicopter, submersible, matching tender – are key features of any well-equipped superyacht and LHT imagines Explorer customers carrying on this tradition. “The spacious lower deck of a widebody offers lots of room for additional ‘exploration equipment’,” Grube enthuses.
“Right now, we envisage a ‘Mobility Lounge’ in the rear cargo deck, visible through a glass floor from the main deck and accessible in flight via a staircase. We’ll create it in cooperation with BRABUS, for joint presentation at an upcoming show, although the ‘toys’ we plan to integrate will go well beyond automotive.”