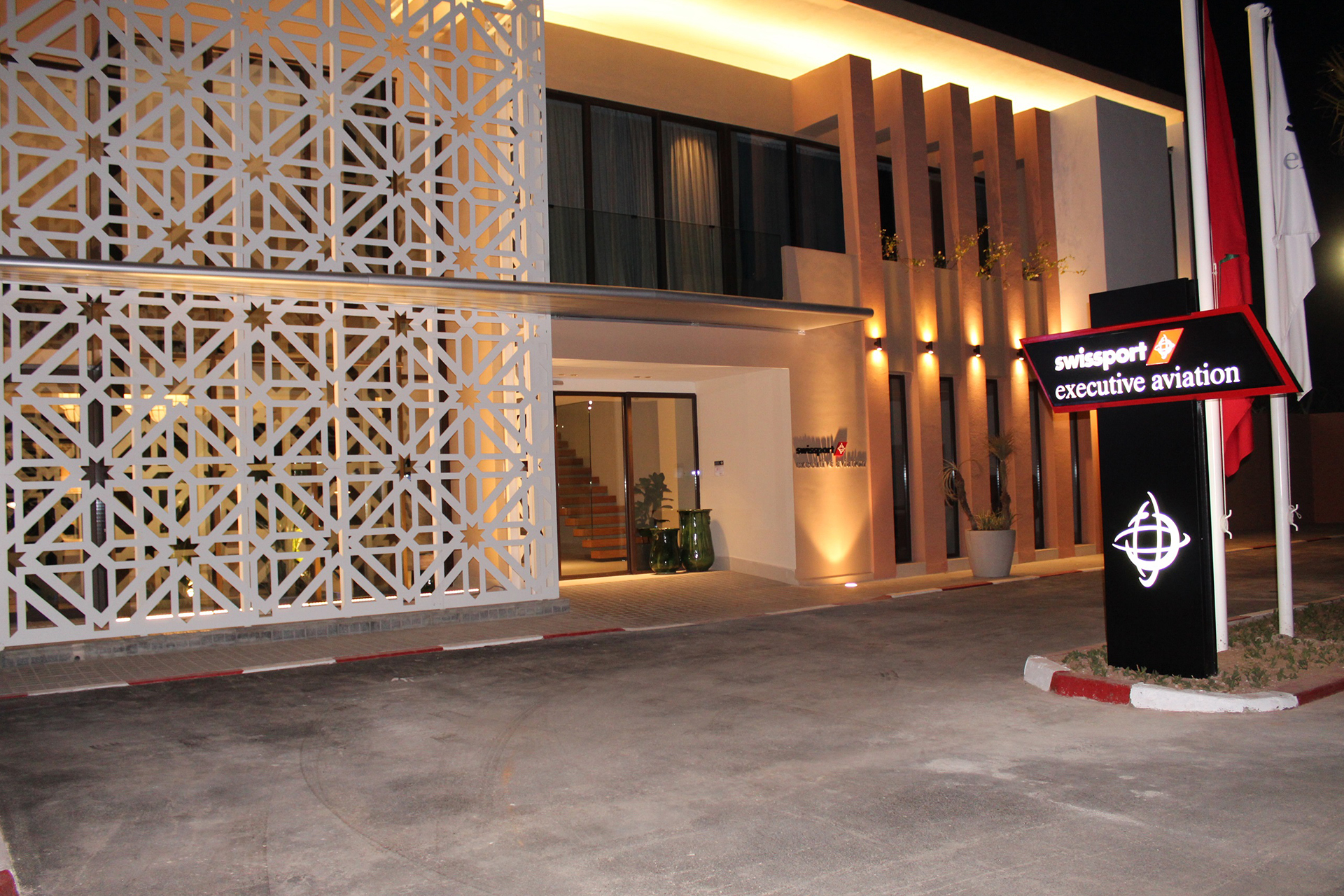 Swissport Executive Aviation opened a brand new VIP terminal at Marrakech Menara Airport on 1 February 2020. A significant development for the company and for business and VIP aviation in Morocco, as well as the whole of North Africa, the bespoke facility became available just as the country entered into a strict pandemic lockdown.

Demonstrating the resilience that has become an industry characteristic, Frédéric Perez, Operations Director Swissport Executive Aviation Maroc, is stoically looking forward to showing the beautiful facility off to the world.
After winning an Office National Des Aéroports (ONDA) international tender for commercial aviation ground handling on behalf of the Moroccan airport authorities, Swissport Maroc was established in 2012. Swissport International subsequently responded to an ONDA tender released for the construction and management of FBOs across the country.

The tender was split and awarded to Swissport International, and a competitor, late in 2016, with the result that Swissport Executive Aviation Maroc was established in the first quarter of 2017.
Swissport Executive Aviation Maroc opened an FBO at Casablanca, working out of an existing, shared facility, before starting work on the construction of a general aviation handling and FBO site at Marrakech Menara. The establishment of Swissport Executive Aviation Maroc spoke to Swissport International’s ambition for network growth and its Swissport Executive activities, plus the company had observed rapid expansion in the region’s business aviation market over recent years. Added to that, Perez says: “There is a real will from the Kingdom to offer its VIP visitors international FBO standards of service and infrastructure.”
Swissport Executive Maroc worked with architects ZAZ NAMANY to define the new FBO building, a process about which Perez reveals: “Having the chance to build and design your FBO from scratch is a huge opportunity, but also a challenge. We wanted to create a facility that satisfied the needs of VIP passengers and crew, and provided an efficient workspace for our FBO and operational control centre – our operations throughout Morocco are managed from Menara – while sticking to the budget.

“Compared to taking over existing infrastructure, building a new FBO basically allows you to do almost anything you want. I told the architects what was required in terms of facilities, equipment, size and layout. They immediately understood what was needed and it worked like magic.

“We optimised the new building with a wide, dedicated space for crew members on the first floor, with a view over the runway. Many FBOs focus primarily on their VIP areas, but for me it was very important to provide a comfortable, private space for crew. The result is an area of 150m² with TV and media corners, a pool table, kitchen and mini bar, two private snooze rooms and a pair of large shower rooms.”

Menara’s VIP facilities occupy 220m² on the ground floor and include three accessible private bathrooms, a bar, a buffet and a media corner, and a view out to the runway. A 50m² VVIP lounge on the first floor incorporates a terrace for passengers seeking additional privacy. “Our customers also have the possibility of shopping,” Perez notes. “We’ve entered into partnerships with high-end Moroccan brands for jewellery, cosmetics and deli, and a niche Italian luxury perfume brand, all of which have booths in the FBO.” The décor throughout is a blend of traditional Moroccan and Western design.

On the ramp
Swissport Executive has an agreement with the Moroccan branch of a French company for aircraft cleaning, while Perez says catering is provided by various partners on the airport or from outside, ‘depending on the customer’s budget and requirements’.

Ground services, including ground power units, toilet and water service, air conditioning service and so on, are provided on a shared basis by Swissport Maroc, while subcontracted hangarage is available for aircraft up to G450 size, subject to available space. In addition, Perez adds: “We’ve partnered with a new maintenance company that provides nitrogen and oxygen refills, together with support in case of an AOG, although there are no certified general aviation maintenance companies at Marrakech Menara Airport.” Security on the GA ramp is assured by a 24/7 Gendarmerie Royale (Royal Military Police) presence.

Although Menara is the only Swissport Executive site in Morocco boasting an exclusive FBO, the company operates the shared facility at Casablanca and has people on the ground at Tangiers and Rabat. Regardless of station, Perez says his team offers consistent levels of service, albeit restricted by facility size and equipment. “All station and operational control centre staff are used to booking hotels, while our FBO implementation manager works with our hotel providers and ensures the availability of limo services, helicopter transfers, shows, restaurants, flowers and the satisfaction of special requirements, including surprise wedding trips and private FBO access.”

All Swissport Executive Aviation Maroc staff are trained in-house to Swissport International standards and requirements. “We don’t subcontract staff,” Perez insists, “to ensure we offer our customers a constant high level of safety, quality and dedication.
“I work with our CEO on the selection of managers, and alongside the managers when we are fulfilling supervisor and agent positions. We generally look for people from within the industry, but also have managers from outside aviation with a VIP customer service background.”

Swissport Executive Aviation Maroc is far from unique in feeling the impact of COVID‑19, although the opening of its Menara FBO could hardly have suffered worse timing. Adding further to the challenges Perez faces, he says both the Menara and Casablanca sites were on the verge of gaining international recognition pre-coronavirus. “We’re working towards IS-BAH Stage 1 certification at both. We were supposed to have our first audit late in March, but everything was postponed owing to COVID. We are ready for Stage 1, just waiting for the borders to open so the auditor can visit us.” The same is true for the majority of the company’s VIP clientele, for whom a treat is in store at the brand new Menara FBO.