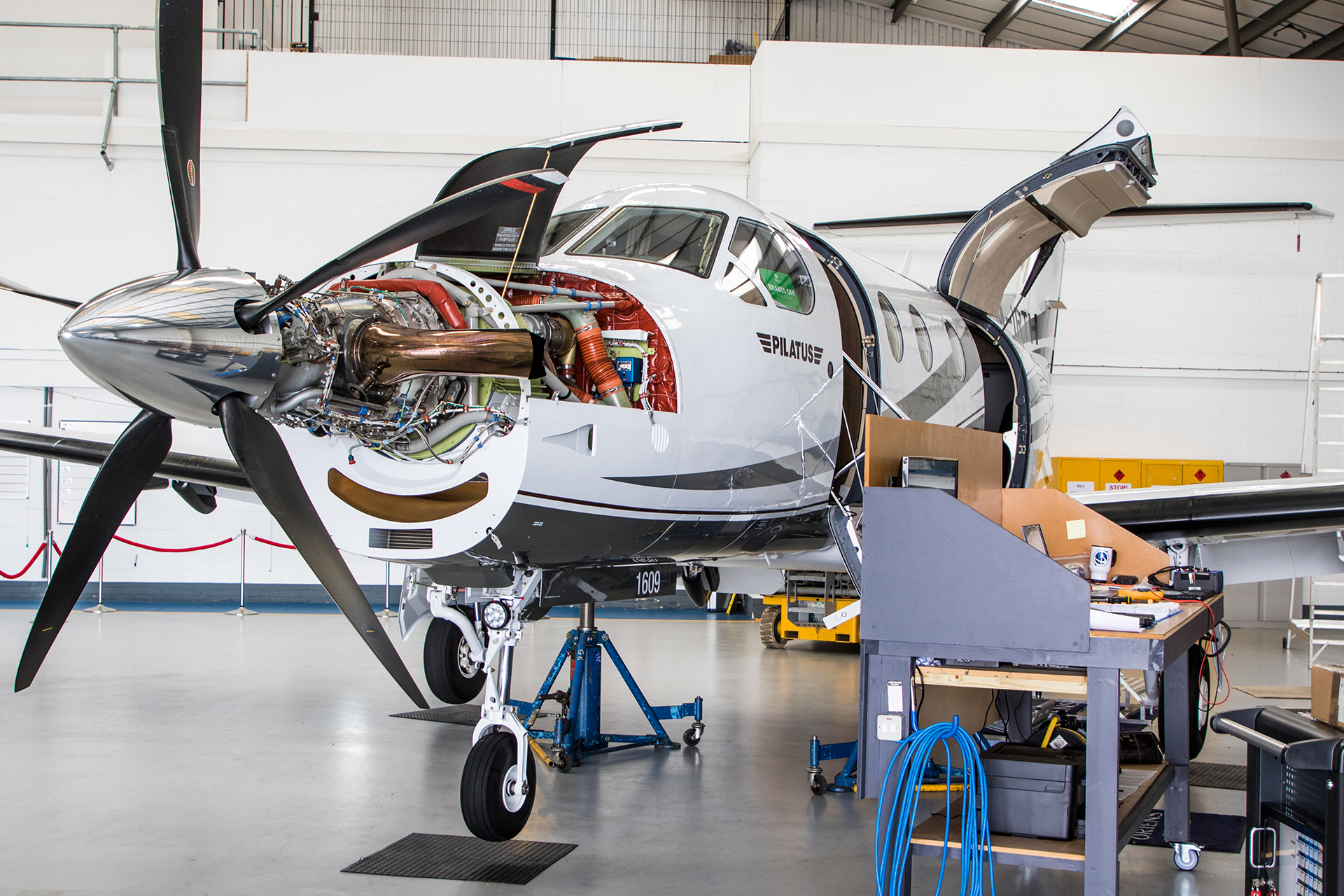 During many years of industry experience, Stuart Locke, General Manager, Aircraft Maintenance at Oriens Aviation, says he’s never seen an aircraft as reliable as the PC-12

Sometimes it’s a series of coincidences that makes a story seem like a good idea. In this case, the PC-12 is a very cool aeroplane, which is a good start. Also, the latest PC-12NGX variant recently came to market and UK exclusive Pilatus distributor Oriens Aviation has been busily demonstrating it around the country. An interesting, young company, Oriens also happens to be based at London Biggin Hill Airport, an airfield with strong links to the Battle of Britain; 2020 marks the 80th anniversary of that seminal moment in history.

Those who follow Oriens’ social media feeds will be familiar with its marketing efforts up and down the UK and therefore have a grasp on the latest PC-12 model. I decided therefore to find out more about the organisation behind the aeroplane, the maintenance and customer support that Oriens offers out of its friendly, modern Biggin Hill facility.

So far, Pilatus has built in excess of 1,700 PC-12s. The type entered service in 1994 and has remained faithful to a basic premise of practical design, fine build quality and comprehensive avionics, married to a Pratt & Whitney Canada PT6 turboprop engine and rugged, highly configurable airframe.
Beyond the marketing literature, the PC-12 is genuinely recognised not only for how well it is put together but also its reliability, while an engineer of almost four decades’ experience recently described the PT6 engine to me as ‘bulletproof’.

The logic of an article on PC-12 support was already looking shaky.

But with Stuart Locke, Oriens Aviation’s General Manager, Aircraft Maintenance already lined up for interview, it seemed only polite to go ahead. In fact, an initial arrangement had been cancelled when Stuart was called to an AOG and I planned to explore the issue when we spoke. It had actually been a problem with an overseas-registered PC-24 jet and although Stuart and the team spent a morning preparing a fix, the problem was eventually solved without their intervention.

However reliable an aircraft might be though, incidents do occur that keep it on the ground. As such, Oriens offers a robust AOG capability. “The PC-12 represents a growing market,” Stuart says, “because of sales in the UK and Europe, with aircraft travelling into the country, and we cover the PC-24 as well. We receive AOG calls from time to time, but it’s far from the core of our business. Our primary coverage area is the UK and Ireland, but we also support one or two customers in northwest Europe.”

Not Much Doing
Scheduled maintenance is therefore the mainstay of Oriens’ work. “On the PC-12, the majority is carried out on a calendar basis, so we tend to see the aircraft twice a year, once for minor checks and a second time, for about two weeks, when we remove panels, disassemble and inspect sections of the landing gear and other moving parts, and carry out function checks on the avionics, safety and other aircraft systems.”

If my assumptions about the PC-12’s reliability are correct, other than inspecting and replacing worn parts, I anticipate there’s little else for Stuart’s team to fix. “It’s true,” he says, tongue in cheek, “there’s really not much to do. It’s very difficult to run a profitable maintenance business with this aircraft because it is so reliable.”

Unstoppable in his enthusiasm, he continues: “I have experience of Bombardier, Embraer, Dassault, Hawker, British Aerospace and other aircraft manufacturers, and nothing compares to the PC-12 for reliability. The way it’s built and protected puts it in another league.”

From personal experience I can confirm that the PC-12 feels very solid; it gives the impression of being an inherently safe place to be. Which is no bad thing, since solidity and safety are important factors in the aircraft’s natural operating environment, which includes flying off unprepared surfaces. Although most owners use hard runways, there are those for whom grass is a regular operating surface and presumably the landing gear, antennas and undersides of those aircraft pick up plenty of bumps and scrapes as a result.

“No,” Stuart says, “they don’t.” It’s another disappointing answer. “Because the aircraft is designed for those operations, nothing kicked up from the main landing gear hits anything. We’ve seen no flap or undercarriage damage from unpaved runways. Occasionally we see a little bit of propeller damage, but not more than I’ve seen on other aircraft in the past. I don’t see any real evidence that owners are punishing their PC-12s at all.”

Boringly predictable maintenance
To recap, so far I’d learned that nothing breaks, even when the PC-12 goes ‘off-road’, and scheduled maintenance is boringly predictable. It was time to turn this non-interview around. I reckoned Stuart was avoiding mentioning how the aircraft’s antennas and other excrescences collect mud and stones. He wasn’t. “If you look at the aircraft, you’ll see that the antennas are mounted well forward, so for a ground impact to take out an antenna, the landing gear would most likely have to be up. There’s nothing further aft that could be damaged.”

In its marketing, Oriens makes much of the PC-12’s versatility, describing it as a flying SUV and showing photos of aircraft loaded with all manner of baggage, sports kit and even motorcycles through the large rear door. The baggage area must come in for a pounding therefore, providing restorative work for Stuart and colleagues.

“We haven’t seen too many operators carrying lots of cargo,” he admits, “but people do take the back two seats out – the additional seats we call them, since the PC-12 is usually configured with six executive seats and two for extra passengers at the back. We haven’t seen any damage. Protective covers are available, but cargo aircraft are usually configured differently anyway, while the typical PC-12 customer tends to take really good care of their asset, because they’re so often owner-pilots.”

PC-12NGX
The PC-12NGX is the third major iteration on the PC-12 theme. As well as an uprated PT6E-67XP engine, equipped with FADEC and autothrottle, the model features improvements to its Honeywell avionics and larger cabin windows. Oriens’ engineers are factory trained in Switzerland and qualified across all three variants.

Occasionally an aircraft will require work beyond Oriens’ scope – a veneer replacement, for example – but the company’s good relationships at Biggin Hill mean there’s always a local specialist available. In-house workshops enable battery servicing, and a wheel and tyre capability is being worked up. Avionics checks and modifications are done completely in house, including a recent complex instrument change in which the panel was removed and wiring to the wing installed.
“The airframe structure has changed very little between models,” Stuart notes, “but the avionics, interior and engine have all been improved. With the PC-12NGX, Pilatus has also introduced reduced frequency maintenance. It’s still on a calendar basis for regular operators, but for high-intensity users maintenance intervals are extended from 300 hours to 600 hours.” All of which is great news for customers, but less than ideal for maintenance providers looking to make money; “It comes with its challenges,” Stuart admits.

He’s also quite obviously proud of his experienced team. “If you look at lots of the organisations around Europe that maintain the PC-12, you’ll see they’ve worked on smaller GA-type aircraft and moved up to it. But we have people who’ve worked on other business aircraft and regional airliners. They’re very, very knowledgeable. The maintenance team immediately to hand on the shop floor is six-strong, and then I’m a certified engineer too, plus we use contract engineers when the workload is high.”

Stuart also sees considerable importance in recruiting young people. “We have an apprentice who joined the company in a different role but wanted to get into maintenance. So we created a path for him to do that. We also recently recruited a junior engineer to match our continued growth. Right now, in the pandemic, recruitment is quite easy because so many people are looking for jobs and it’s not difficult to convince people this is a good place to work. A quick walk around the hangar, a look at the aircraft and brief discussion and it’s easy to enthuse someone. Oriens Aviation is a very good organisation to work for. The aircraft and Pilatus brand mirror that.”

Stuart says Oriens has managed through the pandemic by working seven-day rather than five-day weeks in two shifts, one team on each shift. Thereafter, the arrangement has remained flexible. And that’s true of the PC-12’s owners too. Stuart mentions one who regularly used the train to travel between UK facilities pre-COVID, believing it to be the environmentally responsible thing to do. With restrictions on travel, he switched to using the PC-12 and it has been instrumental in keeping his businesses running and people employed.

The highest-houred PC-12 that Stuart’s seen has clocked just over 10,500 hours, thanks in part to a previous commercial career in the US. At last, it seems I’ve identified a PC-12 that might be causing maintenance headaches… “There’ nothing to show it’s an old aircraft,” he states. “We replace parts that are worn out, but then that’s the case on newer airframes too, parts do wear out. There are PC-12s with 20,000, even 30,000 flight hours around the world and I think the oldest is around 40,000 hours. The PC-12 is a workhorse.”