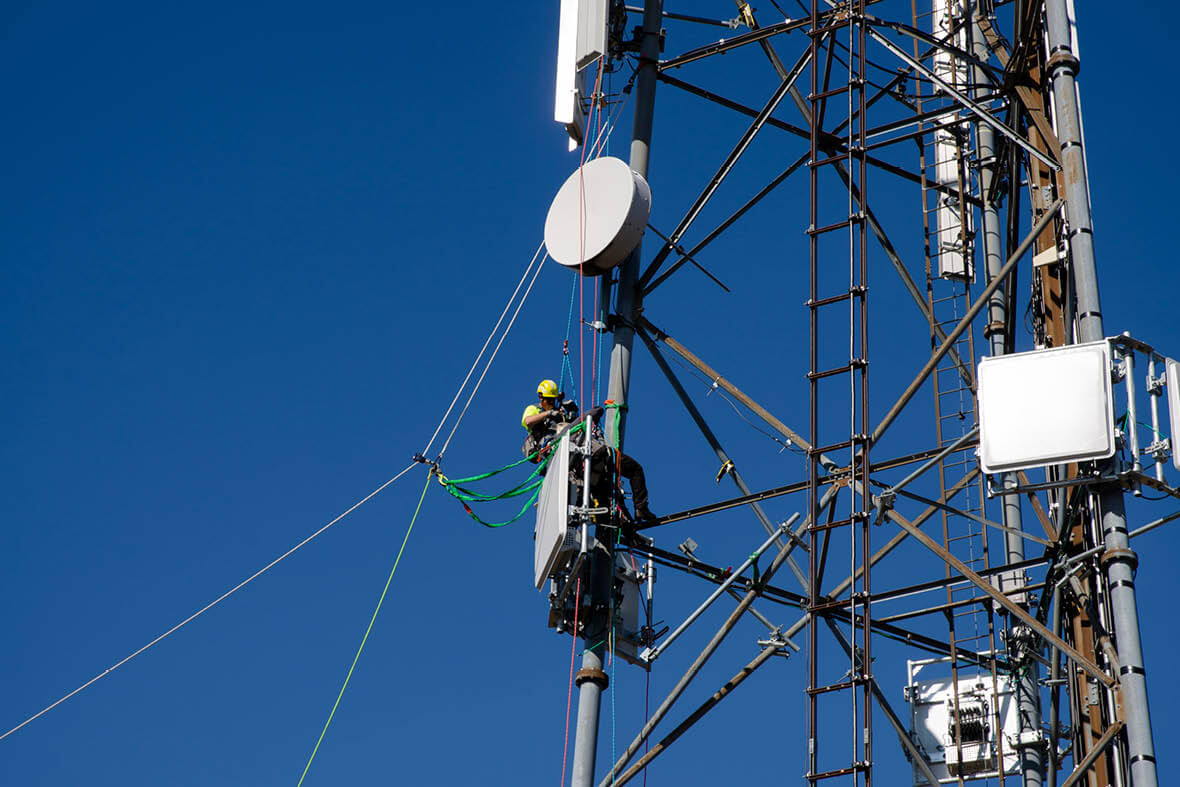 While Gogo Business Aviation works to bring 5G and LEO satellite services online, EVA wanted to know just how good the company’s offer is, so we asked a customer

Over anything but the shortest missions, most business, corporate and private aviation passengers expect inflight connectivity. How that connectivity is delivered depends upon customer requirement, budget, aircraft type and even geography, with operators in the US and Europe having air-to-ground (ATG) options as well as the variety of satellite possibilities relied upon across the globe.
Gogo Business Aviation operates across both spaces. Its US ATG service has evolved through 3G to 4G and will imminently offer 5G connection, through the popular AVANCE system that aims to seamlessly merge ATG and satellite services on the aircraft. Satellite communications, through Iridium ST 4300 and Inmarsat’s SwiftBroadband, have long been options for Gogo Business Aviation customers, and now the company is preparing to offer global low-latency Ku-band service in association with OneWeb and its low earth orbit (LEO) satellite constellation.
Hughes Network Systems has developed an electronically steered antenna, the first for LEO connection in business aviation, sufficiently compact to suit even smaller jets and turboprops. Integrated into the AVANCE system, it will require the installation only of an antenna, a power cable in and an ethernet cable out to the AVANCE ‘box’. Sergio Aguirre, Gogo Business Aviation’s President and COO says: “It will be a fast and affordable broadband system providing best-in-class global performance on the broadest range of aircraft in business aviation.”
The LEO service is expected to come online in 2024, while Gogo Business Aviation completed its 5G tower network in October 2022 and expects to begin connecting customers in mid-2023. Combined, the LEO product and 5G promise to offer a convenient, affordable, high-quality service to customers who travel regularly in US and Canadian airspace and need the option of international connectivity.
In the meantime, customers will continue to enjoy Gogo Business Aviation’s 4G offer and wider service package, the quality of which any Gogo executive will inevitably describe as exceptional. And so it may be, but EVA sought an entirely different perspective from long-time Gogo customer Corporate Eagle.

The customer
Operating out of Oakland County International Airport, Michigan, Corporate Eagle provides fractional ownership on a fleet of Dassault Falcon 2000EX and Hawker 900XP jets, and Beechcraft B200 King Air turboprops. The Falcons and Hawkers are similarly equipped with Gogo Business Aviation AVANCE L5, Gogo Text & Talk, Gogo Vision and SwiftBroadband. The King Airs have no connectivity although Christopher Weedon, Corporate Eagle’s VP, Director of Operations, acknowledges that should sufficient demand arise among its King Air members, installing ATG on the King Air would be a relatively simple task.
Dissatisfied with a job at the local grocery store, Weedon joined the Corporate Eagle team in 1987, after “knocking on doors to see if anyone needed a hand over the summer scrubbing bugs off airplanes”. Signing up for flying lessons at the same time, he worked on the ramp before eventually leaving for college. “I came back as a flight instructor and worked my way up. We sold off the flight school in 2006; fast forward to 2022 and our primary business is fractional ownership with just a little bit of management.”
Since its fleet is owned, Corporate Eagle makes its decisions on critical capability, including connectivity, with the proviso that all the aircraft in each fleet must be equipped to the same standard. Why was Gogo the first choice? “We go right back to Gogo’s 3G system,” Weedon begins. “It was really gaining traction because until then there was no cost-effective solution beyond SwiftBroadband that could provide a reasonable download speed. We tried it on one of our Hawkers and it became very popular.
“As our aircraft subsequently came up for their 48-month heavy inspections we took the opportunity to install the equipment. The costs were reasonable and the service per month, divided between eight co-owners per airplane, wasn’t that much more than they were paying for their home internet. Because the fleet had to be identical, we had to equip every aircraft the same. Then, when the buzz started around 4G, we told our members about it and transitioned the fleet onto that. Now 5G is coming and we’re provisioning for that. We’d like to include it in the King Air too, but the members using that airplane are rarely in the air for more than an hour and they’re happy to tolerate being out of touch for that long. But it absolutely could be done very easily.”
Corporate Eagle’s jet members are typically in the air for five hours on the Hawkers and up to seven on the Falcon. They want connectivity and enjoy their Gogo provision, but how good is it in day-to-day service? All providers, and Gogo Business Aviation is no exception, talk excitedly about speeds – but the reality is that if connecting to the service is difficult or slow, or the basic action of sending an email or text is frustrating, then the promise of absolute speed is irrelevant.
“I understand the underlying design constraints of the systems that are out there, but you can’t expect that of passengers or co-owners: it comes down to the experience,” Weedon says. “We find it works very well and we get signal as low as 3,000ft; it just depends on what part of the country you’re over. If you’re over northern Michigan you probably won’t get a reliable signal until you’re at 10,000ft or further south, towards Detroit and Toledo, but we don’t often operate the jets in that area. The speeds we see are satisfactory in as much as we’ve had minimal negative feedback from passengers. It’s giving our owners want they want, and we’ll learn more from their reaction when we start purchasing the 5G equipment. I doubt we’ll see any pushback.”
Acknowledging that Gogo’s is a terrestrial system, Weedon notes: “There are inevitably areas where there’s more noise on the frequency or on adjacent frequencies, usually over major metropolitan areas. But when you’re going 400kt plus, that only lasts for a couple of minutes. We get occasional complaints about service dropping out and when we go back and look at the route it’s usually over a city – Atlanta, Georgia is a classic example. But any internet or wireless system has similar challenges.
“We were curious about how good the system was. We weren’t really getting any other complaints, but we didn’t want to assume it was good just because no one was complaining. We ran a test case, going from the top-tier non-streaming unlimited plan to the top-tier streaming unlimited plan, which effectively doubles the cost; it doesn’t necessarily double the speed, but it does remove data restrictions and allow you to stream content. We told the membership base we’d done it and encouraged them to give it a try. The feedback we got was that no one was really using it and for most of them the extra capacity wasn’t worth double the cost per month.
“We reverted to the non-streaming plan and kind of waited for someone to say: ‘Hey, what happened, turn the ‘good’ one back on,’ but we didn’t get that. Our members tell us they use it to stay connected, with text, email, calls and internet browsing. All our jets also have Gogo Vision installed, with the hard drive onboard loaded with all the latest movies and TV shows. We don’t know how much that’s used in flight but it’s a cost-effective way to provide connectivity and entertainment without paying the extra for streaming.”

Problem solving
Operators and, for the most part customers, accept that connectivity is unlikely to be perfect – we are all used to occasional buffering at home and in the office after all. But every system fails sometimes and then operators like Corporate Eagle are directly in the firing line for customer complaints. In this case, Weedon explains: “Most of the time when we hear ‘it’s super slow’ or ‘not working’, more often than not there’s a disproportionate number of devices connected to the internal Wi-Fi network, and we can see that on the Gogo Dash app. And when it’s not that, it’s because they were over one of those areas where connection is difficult.
“We’ve had an occasional hard failure of an LRU, but that happens with any equipment, and the LRUs are generally rock solid reliable. I don’t think we’ve had an antenna failure, but we have had a couple of misconfigurations when the airplane came out of the shop. We hadn’t been precise about how to configure the Wi-Fi system. We had an airplane with SwiftBroadband, for example, and installed AVANCE L5. Normally the systems are configured to work together so that when you go out of range of the terrestrial system it automatically switches to satellite. The switch works so well that you don’t know it’s happened other than seeing a drop in speed that even then you may not notice. And then a big bill comes in for satellite data usage.
“We had a couple of these and contacted Gogo technical support. They’re available 24 hours a day and they help you through the issue. We have access to the diagnostic backend tools where we can log into the router and get deep into the configurations. Each time we realised it was our fault not Gogo’s, but they provided all the help we needed to fix it. We’ve had engineers come out too, once to confirm an LRU hard failure and another time to some equipment that was timing out. It took the engineer, a couple of test flights and our IT department to figure it out, but between us we solved the problem.”
Prior to Covid, Weedon says that connectivity was a priority for Corporate Eagle’s members, to the point where if a programme aircraft was not available, they were happy so long as the replacement had internet. Now, with demand for aircraft outstripping supply, availability of a flight, with internet or otherwise, is the driver, but Weedon believes that will change as the market adjusts and connectivity will again be the deciding factor.
Corporate Eagle’s crews have come to regard Gogo’s connection as an important source of supplemental non-flight-critical data and Weedon says it enables rapid communication between the company’s flight operations centre and flight crews. “We use a mobile device as an approved electronic flight bag, and pilots interface with it throughout the flight. So, it’s natural for our schedulers to communicate with the crew that way.” Overall, as part of Corporate Eagles’ busy operation, Gogo Business Aviation’s reliable connection and exemplary support has become as useful to its team as it is essential to its members.