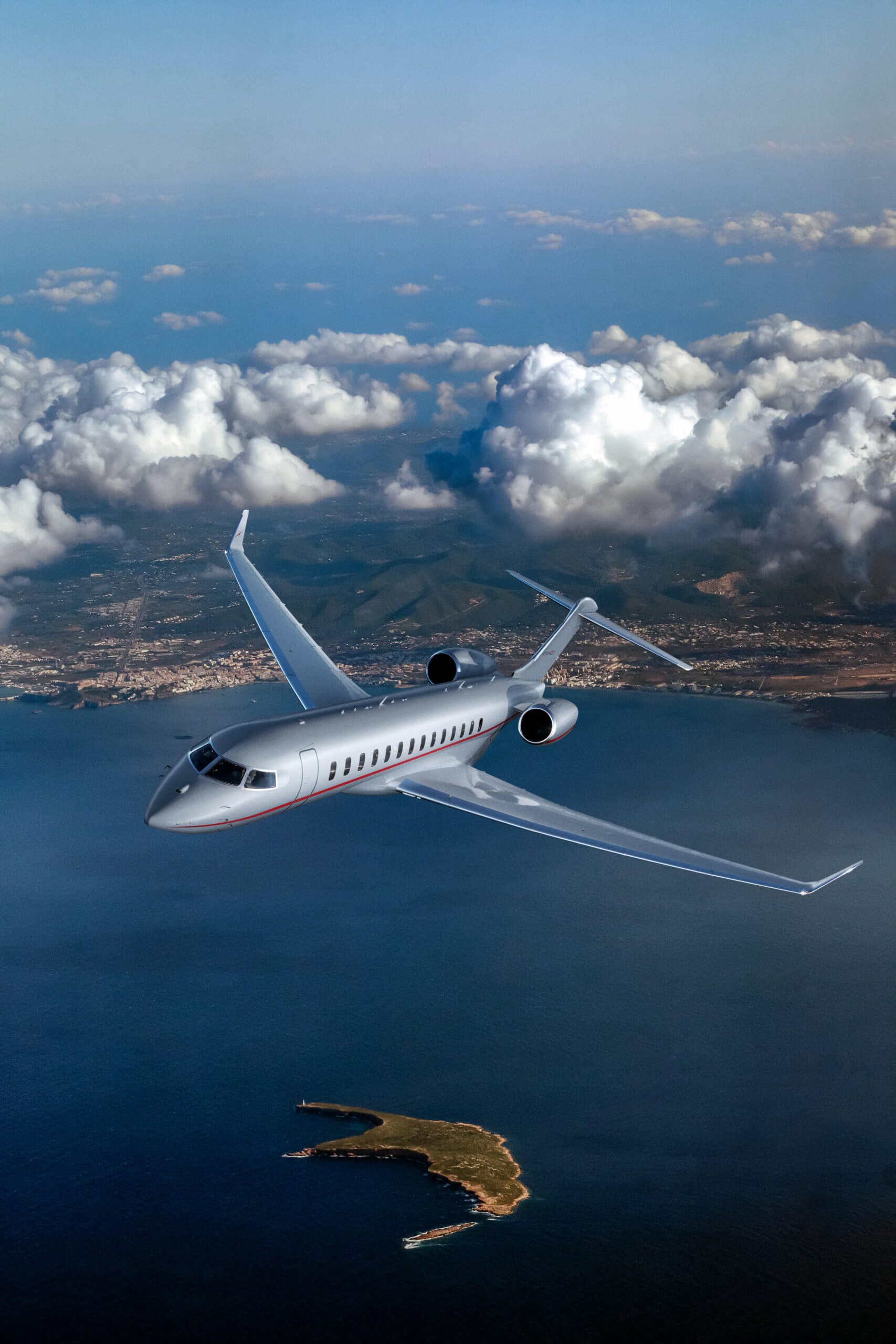 VistaGlobal is preparing to carry the VistaJet brand into a new era, as Ian Moore, Chief Commercial Officer, explains

All of which demonstrates the increasing importance of industry consolidation and innovation, but begs the question of what exactly is VistaGlobal, since it’s not an aircraft operator and neither is at a digital platform.

VistaJet Chief Commercial Officer, Ian Moore sits on the executive committees of both VistaJet and VistaGlobal. He explains: “VistaGlobal is really a holding company for a vision. We’ve learned a lot over the 15 years of VistaJet and realise there are so many different parts to the industry that need further ‘industrialisation’, like we already did with VistaJet.

“VistaJet looked at the imperfections of the ownership model and created a business out of what hadn’t previously been available. Now, we’ve recognised several other elements in the industry that require the same treatment and disruption.

“VistaGlobal is a combination of VistaJet, XO – our digital marketplace that’s creating a platform where aircraft owners and users can meet in an efficient manner globally – and our VistaLease business, which recognises that there are people who just want their own aircraft. We want to create an ecosystem where we as a company can go and meet anyone who uses private aviation, whether seat sharing or aircraft owning, and offer a solution.”

Moore came to VistaJet in 2010 and recalls a degree of frustration in ‘not being able to speak to everyone’. “Not everyone wanted 50 hours or more on a fleet of dedicated, super-mid size and above aircraft spread around the world. It was a very niche sales approach and VistaGlobal enables us to go in and ask what the client wants. No other company can really go in and listen to clients like that, without simply pitching what it is that they have to sell.”

While acknowledging that VistaGlobal requires further consolidation, Moore says it aims to be at the forefront of emerging markets, including the digital marketplace. “We want to be first to create it, because we feel it will be a winner-takes-all scenario. That’s why we’re creating XO. We’ve built VistaGlobal by listening to our clients, prospects and staff.” Put simply, it’s an enabler that allows VistaGlobal customers to achieve whatever it is they need to achieve, whether it fits the VistaJet model or not.

Moore recognises the contribution VistaJet’s staff have made to VistaGlobal and agrees they are the heart of the VistaJet offering. To step inside a VistaJet Global 6000 cabin is to step inside any VistaJet Global 6000. They are equipped and completed to the same high standards, so much so that individual aircraft are essentially identical. And they’re the same on the outside too, since the entire fleet wears VistaJet’s splendid silver and red scheme. Private flying tends to be a very personal experience and the key to providing that through a fleet of similarly equipped, liveried aircraft is the crew.

“Our cabins have been designed in a neutral but very classical European way – VistaJet was born in Europe and that’s a natural starting point. We choose timeless elements, avoiding trends for things that are cool one day and not cool the next. The thought process is to have space and comfort, enhanced by the lighting and dark colours that become lighter higher up in the cabin.”

But the ‘secret sauce’, he says, is understanding the VistaJet clientele and how crews employ that understanding. “You could be working with an Asian customer and think they want an Asian service, then find you’ve really annoyed them because they wanted a very European-style of service. Equally you could bring in standard catering for a North American client and discover they were after sushi and sashimi.

“So, we understand our clients and aim to create a home from home in the air, an extension of their lifestyle. For that we prepare a very detailed profile. It ensures that every time a client comes aboard the aircraft, they exhale as if they’re on their couch at home. And it’s not just about the private dining on board, it’s also the temperature of the cabin, the music that might be playing, where they want their jacket hanging and where they leave their phone for charging. It makes them feel at home and like this is their aircraft.”

And, although for the duration of any flight the aircraft crew is effectively the entirety of VistaJet as far as the customer is concerned, the process of gathering data and acting upon it to perfect the client experience reaches far beyond the cabin. “We gain information from every one of our touchpoints, whether our sales or customer service teams, or crew, everyone is tasked with ensuring that we’re continually updating and downloading more information about a client so their next flight is better than their last.”

Thanks to VistaJet’s worldwide office network, it also prides itself in having customer service advisors with local knowledge of wherever a client is. It also usually has someone in the same time zone as the client. “We’re a global company, but our aim is for our customers to feel we’re local,” Moore summarises.

He also acknowledges that VistaJet invests considerable time and money in crew training. “The COO personally interviews every single pilot we hire. It’s about their ethos and their technical capability, they are a special breed. Our pilots have simulator training twice per year and come to the ‘mothership’ in Malta not only to understand what we’re doing in the cockpit, but also in the cabin, and what we’re aiming to do for our clientele around the world and what the company’s plans are. We have a maniacal focus on getting the right people, then on ensuring they’re trained twice as much as the industry requires, and understand the company’s objectives.

“We also invest a lot of time and effort ensuring we select the right people for our cabin hostesses. Our head of cabin service flies around the world interviewing every member of cabin crew we bring onboard. They are the most consistent touchpoint with our customers and they have to be of the right mindset, as well as going through multiple levels of internal and external training.

“They train with the British Butler Institute, they’re trained to WSET [Wine And Spirit Education Trust] Level 2 and we’re working with the Norland Nannies to have all our cabin hostesses trained on how to deal with our little people just as well as our big people. Other companies just can’t do these things on a global scale. We’re investing not only in the ‘hard metal’ of our aircraft, but also in the people who provide our service. We’ve spent a lot of money on aircraft, but our people are our most important asset. Our customers want to feel like they’re being dealt with exclusively and solely, and that’s the secret for our cabin crew.”

VistaJet has been consistently loyal to gulf in its aircraft investment and Moore reckons the Canadian OEM provides the most optimal cabin experience for its clients, while recognising that extremely capable alternatives are also available. “We’re also very proud to be an early adopter of the Global 7500, which appears to surpass even the new Gulfstream G700. We invested in the aircraft back in 2012, so it was a long, long punt. But we aren’t married to Bombardier. If another manufacturer comes up with an aircraft in the categories we want to be in that is better for our clientele, then we’ll go with them.”

The Global 7500’s large cabin is enabling even greater refinement in VistaJet service and not only because of its additional living space. “The galley, for example, gives us an oven, which changes the food and dining experience. But we’ve found that our customers are really using the aircraft’s extra range – over long-range flights it’ll probably deliver a time saving of 20%, so although it might have running costs 30% higher, 20% of that is returned not only in time, but in costs per hour. We believe it’s a game changer.

“We think some of our clients will step up from the Global 5000 or 6000 to the 7500, as we’re seeing the purchase of an aircraft like the Global 7500 becoming less palatable to corporate shareholders. Our early indicators of interest tell us we’re entering into a new paradigm for corporates where going out and buying a $70-million aircraft for flying 200 or 300 hours per year doesn’t make sense anymore. We’re expecting an entirely new type of client because of it. Going non-stop from New York to Asia, the extra 13 feet of cabin length – it’s a game changer.”

While the Global 7500 is perhaps changing the way people fly, many of those same people are increasingly concerned about the environmental impact of their flying. Since VistaJet is a European company, more than 40% of its aircraft carbon emissions are offset through the European carbon trading scheme. “But that’s not enough,” Moore says – he’d actually come into the interview late, delayed by work on a new sustainability paper that comes into effect imminently.

Reluctant to reveal details on what was still a work in progress, Moore nonetheless confirmed: “There’ll be an offsetting element to it and continuing efforts to ensure that 95% of our cabin amenities are sustainable. And, we already offer an early booking discount, because that enables us to find the most efficient way for us to fly customers, bringing down our carbon footprint and costs. I think our business plan also serves as an antidote to the wastage we see in our industry, where people might buy 200 hours on an aircraft but another 100 hours are wasted ferrying it to where it’s needed or even to park it because there’s no space at the destination.

“On top of all that, through XO we offer seat sharing, looking at reducing the inefficiencies of flying empty seats. We’re offering customers the opportunity to have all the seats filled, offsetting some of the cost of their flight and creating efficiency. So, we’re minimising empty legs and eliminating cabin inefficiencies. But it’s still not enough, so we’re partnering experts to help us become properly sustainable and help us educate our clients and the industry. We take our role in this very seriously.”