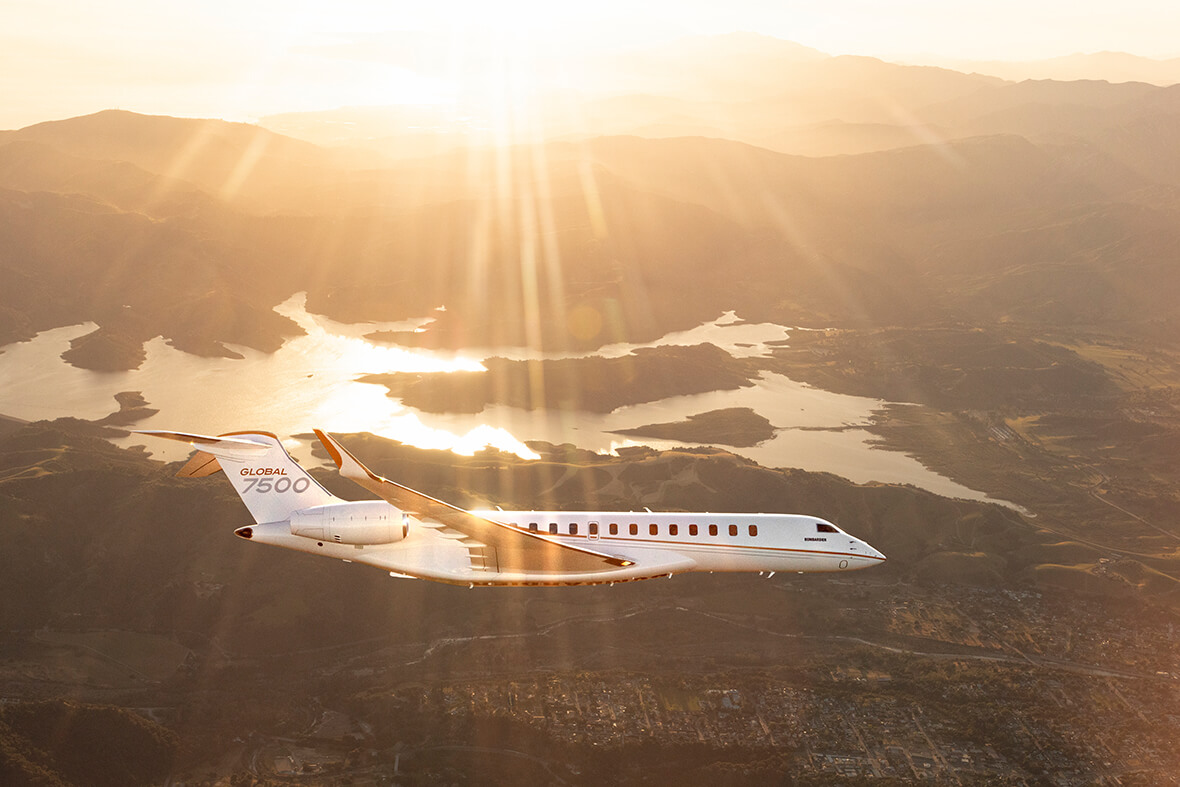 In June last year, Bombardier announced that its Global 7500 had become the world’s first EPD‑certified bizjet. But what’s an EPD? And why should the industry take note?

In 2019, Bombardier and Gulfstream pushed executive and VIP aviation to new limits with a series of record breaking high-speed, long-distance flights. The Global 7500 and G650ER, respectively, proved their ability to link distant city pairs at transonic cruising speeds. Both aircraft impressed and the OEMs were quick to extol the virtues of their machines.

Then, on 30 June 2020, Bombardier released an Environmental Product Declaration (EPD) for the Global 7500. It was the first manufacturer to do so for a business jet, and although firsts where the big Global is concerned are not unusual, the EPD was clearly more than just another certificate.
So what is an EPD? It’s an externally verified award from EPD International’s EPD System which, according to its website, is a ‘Global EPD programme for publication of ISO 14025 and EN 15804 compliant EPDs’. The system dates to 1998, when it was created jointly by the Swedish Environmental Protection Agency and industry. Apply its standards to a bizjet and it takes far more than sustainable fuel and efficient flying to achieve. In fact, it requires an aircraft built to EPD standards, and doing that while also achieving extreme performance is quite the feat. How was it possible?

Mark Masluch is Director of Communications & Public Affairs at Bombardier, but also represents the company on the General Aviation Manufacturers Association’s Environment Committee. “Some 80% of the environmental impact of a product can be determined at the design stage,” he says. “This fact influenced our decisions from the very beginning of the Global 7500 programme and the aircraft is manufactured with design for the environment in mind.”

Bombardier examined the potential environmental consequences of creating the aircraft at five phases of the programme cycle: design, supply chain and production, manufacturing and testing, product and maintenance, and end of life. “We understood early on,” Masluch notes, “that our approach to crafting an innovative, sustainable business jet capable of class-leading performance required innovation at every stage of its life cycle.”

It’s an approach that requires careful assessment beyond the obvious requirements of reduced fuel burn, although on this key point Masluch emphasises: “The Global 7500’s high-speed transonic wing – we call it the Smooth Flex Wing – cuts down on drag, reducing fuel burn and lowering emissions, while the next-generation General Electric Passport engine generates the lowest emissions and best-in-class fuel burn.” Indeed, according to Bombardier, the Global 7500 emits 3.16lb of CO2 per lb of fuel burned, which is 15% less than previous generation ultra-long range aircraft.

Environmental management
Achieving EPD certification for a jet also means taking a careful look at the company infrastructure surrounding it, so company facilities and eligible locations are already certified to or are working towards certification to the ISO 14001:2015 Standard for Environmental Management. “LED lighting is used at our facilities and renewable energy resources, including solar, hydropower and wind, contribute to aircraft production, particularly in our manufacturing facilities in Canada, where the use of abundant hydroelectric power helps us lower our environmental footprint,” Masluch confirms.

The Laurent Beaudoin Completion Center, from which Global 7500s are delivered to customers, has been Leadership in Energy and Environmental Design (LEED) certified since October 2015, for example, although once the jet leaves its care, Bombardier has no direct control over how it is operated. Nevertheless, it strives to continue the customer relationship beyond the regular high standards of service expected across the industry.

Masluch continues: “As a key resource for the performance of our products, we have the knowledge on our aircraft emissions depending on the mission and work very closely to advise our customers, who are environmentally conscious and increasingly interested in carbon offsetting, to help calculate their carbon offsets.”

Sustainable aviation fuel (SAF) makes an obvious and critically important contribution to reducing the overall environmental impact of all business jets, but especially those, including the Global 7500, only just embarking on service histories that could easily last 40 years or more. “Depending on the blend or mix used, SAF can substantially cut civil aviation CO2 emissions,” Masluch agrees. “It offers the single-largest potential reduction in aviation’s greenhouse gas emissions. Sustainable aviation fuel meets all requirements to be fully considered Jet A – engines and APUs deliver the same thrust and aircraft deliver the same performance. No modifications are required to the engine or aircraft, regardless of the mission, because SAF is for all intents and purposes Jet A.”

Lifetime effort
Bombardier aims to provide its customers with what Masluch refers to as ‘transparent, factual information’ that enables them to realise CO2 savings through SAF now, and evaluate the environmental impact of their aircraft over its lifetime. “The EPD provides operators with a credible and comparable source of information to communicate the aircraft’s environmental performance and enables an ‘apples-to-apples’ comparison with the environmental impacts of other airframers’ products,” he says.

But what about when it comes to refurbishing the cabin? The process of designing a new cabin, choosing materials and upgrading IFEC systems represents a huge investment in time, money and resources. How should operators account for that aspect of their aircraft’s sustainability? What happens to the removed items?

Masluch explains: “At the outset, during the ‘spec-ing’ stage, we work very closely with our customers when they select interiors for their aircraft. To minimise complete cabin refurbishments on relatively new aircraft, we often suggest a neutral palette of colours and fabrics that is versatile and proves timeless in withstanding trends that generally come and go.

“It’s also important that the entire aircraft is manufactured with materials that can be recycled once it reaches its end of life. That said, approximately 85% of the materials from our business jets today are recoverable. We also focus on minimising the use of hazardous materials and related toxic emissions – 99.96% of waste quantity generated over the life cycle of the Global 7500 is non-hazardous. The EPD is transparent in demonstrating this data to the public, and it’s important to note that this is the first time that the recyclability of waste quantity is publicly available with published figures for a business jet.

“Bombardier is working actively with local and international organisations to develop standards regulating aircraft end of life and is involved in research projects to improve the recoverability rate of all of its new aircraft. While we work with industry and suppliers to increase the use of recoverable resources and materials that are easier to separate and disassemble for a second life, we do acknowledge that there is still room for this area of sustainability to continue to grow.”

What’s next?
In publishing the Global 7500 EPD, Bombardier has raised the bar in business aviation environmental reporting standards and the broader aviation industry as well. Looking ahead, therefore, ought we to expect EPDs for any new Global XXXX and Challenger XXX aircraft?
“As part of our commitment to continuously improve our environmental footprint, we have pledged to communicate the environmental performance of all new aircraft programmes through EPDs,” Masluch confirms. The Global 7500’s environmental footprint has now been described from ‘cradle to grave’ and that, Masluch says, also brings less obvious additional benefits. “It allows us to continue to learn, providing a benchmark or base of environmental metrics on which to improve with future aircraft programmes.”