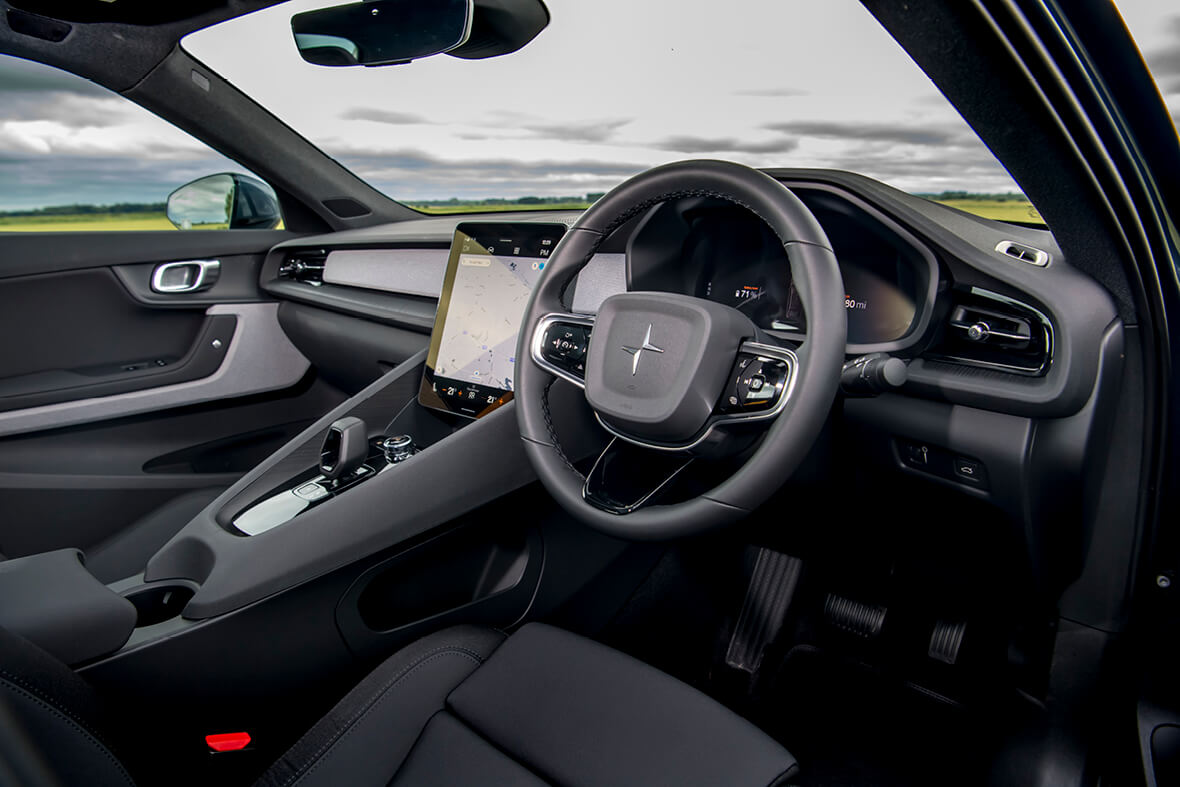 This year has seen a mix of cars arriving for assessment and, bar the odd exception, most of them have been electric, including the glider-like Polestar 2. While the jury is most certainly out on the car’s aesthetics, me included until I lived with it for a week, the Polestar brand is packed full of Swedish cool via its sibling Volvo’s DNA.
Established in 1996, Polestar came about as the performance arm of Volvo and then became a brand in its own right, with ownership shared between Volvo and parent company Geely Holding Group in China, which is also behind the transformation of Lotus.

Now, in 2021 they have two cars under their belt, the beautiful Polestar 1 hybrid coupé and the four-door Polestar 2 fastback. The Polestar 3 is due to arrive in 2022, in the form of an all-electric SUV to go up against Audi’s e-tron, VW’s ID.4 and Jaguar’s I-Pace. By 2030, the company will have its fourth product on the market – Polestar 0, its first fully carbon neutral car and potentially a world first too.

I had a Polestar 2 on test, its arrival coinciding with a need for several journeys to the West Country. Route set, charging points identified and battery fully charged at my local 50kW unit, which took around 1 hour 10 minutes for 277 miles of range, I started out.
The distance between points A and B was 153 miles. Let’s see, I thought. Just 82 miles into the journey I was searching for a rapid charging point with only 20% battery life left.

It’s important to add that this was a chilly, spring evening drive and mostly on motorway and dual carriageway, with little chance of regenerative braking helping charge longevity. But there I was, sitting alone in the dark after 10pm while I juiced-up for another 1 hour 10 minutes on a 50kW charger; there were no rapid chargers safely within the remaining range.

This is still the reality and as much about the infrastructure as it is battery life.

The Car
My Polestar 2 was the dual-battery version, delivering 408hp via the two 300kW electric motors, a 0-62mph time of 4.7 seconds and a top speed of 127mph. It also came with the Performance Pack, including gold Öhlins dampers and matching gold seat belts (it works), Brembo brakes and 20in forged alloy wheels.
As seen at the 2021 IAA Mobility show in Munich recently, Polestar’s expanded range features three powertrains and a starting price of £39,900 for the single-battery model. Starting price for my test car is £45,900.

So, range reality-checked, let me tell you why I love the Polestar 2 so much. It’s bullet-from-a-gun quick, the on-road behaviour is sublime, smooth, assured and deeply comfortable and, on the quietest of tarmac, the only whisper of noise stemmed from the tyres and those gorgeous rimless wing mirrors.
It’s just such an easy thing to be in and it made me feel special, it really did. Also, the build quality is superb and I love the way it looks; now, at least. It’s different, unique; it really does look and drive like nothing else on the road. All hail individuality.

Nexo
Among 2021’s exceptions, one review slot went to the Hyundai Nexo, a capacious front-wheel-drive SUV significant for its hydrogen fuel cell power and which served its purpose in spade-loads.

Airy and light, it was such a relaxing place to be, from headroom to legroom, and equipped with just about every multi-media infotainment option you could wish for, alongside a bevy of other driving aids and features. It’s such an easy car to drive and to be in.

The Nexo was my first ever hydrogen drive, running from fuel cells, and the first thing on my mind was range and the refuelling process.
My closest hydrogen pump is in Cobham, Surrey, a 30.4-mile journey from home to Shell Cobham Services on the M25. At last count there were just 17 hydrogen-fuelling stations in the UK, most of them centred around London. This number will increase as more manufacturers roll out Fuel Cell Vehicles (FCVs).
Filling up with hydrogen is like filling up with regular fuel but without the grease and associated smells. The whole refuelling process took about 10 minutes, making it much more time-efficient than EV charging.
Fuel Cell Magic

How does it work? Hydrogen is sent to the fuel cells where it mixes with oxygen to create electricity that powers the drive system and charges the 1.56kWh lithium-ion battery, which also stores the energy from regenerative braking, boosting performance and range.

As for range, the Nexo comes much closer to covering the miles promised from an EV. Whereas EV range is affected by many things, not least driving conditions and ambient temperature, the Nexo had a predicted range of 266 miles and that’s what I got.

With a top speed of 111mph and 0-62mph time of 9.2 seconds, the Nexo costs not far short of £70,000 and a tank full of hydrogen came to roughly £70.00. So yes, the purchase price of an electric or hydrogen car is higher than that of an equivalent petrol or diesel car but play this off against running costs and it starts to make sense. As more cars come to market, including the second-hand market, prices will inevitably drop.

As for safety, Euro NCAP gave the Nexo a full 5 stars for occupant safety and safety assistance systems, and here’s a flavour of why. Part of the active safety system is the Blindspot View Monitor, which pops up on the digital dash display when you indicate to change lanes, along with lane-keep assist and adaptive cruise control. The Nexo will also park itself with you outside the car and it apply the brakes if it senses you’re not on the ball.

The semi-autonomous Nexo, with wireless charging, Apple CarPlay, really good satnav and a plethora of other gadgets on board, really ticks the boxes. It may not be at the sharp end of Hyundai’s most stylish design language compared to the stunning IONIQ 5 for example, but as a first-out-of-the-gate FCV, I loved it. I’m really looking forward to what Hyundai does next with FCVs and how quickly the infrastructure can support progress.