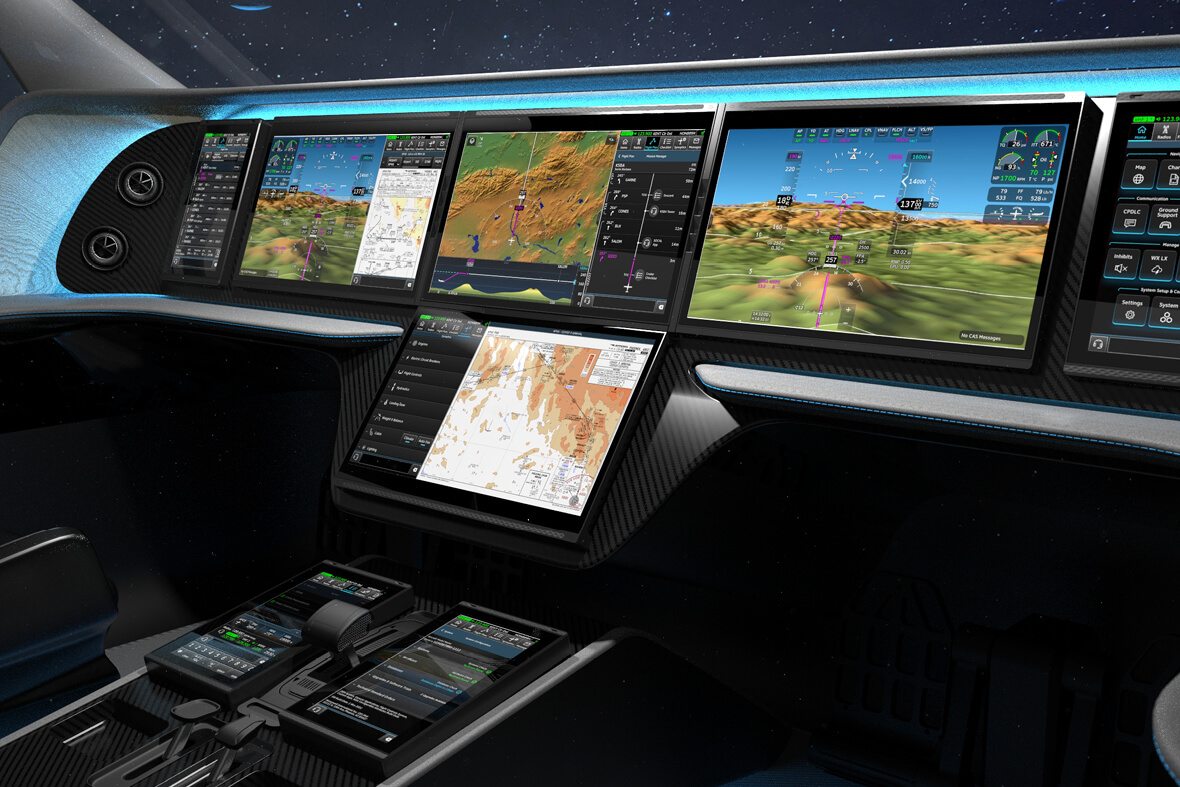 Once upon a time, pilots carried a flight bag. A badge of office, it contained all the paperwork, charts and manuals required to safely realise the magic of flight. The flight bag was essential beyond backing up or verifying aircraft systems; it was an integral part of the cockpit.
Through the 2000s, the electronic flight bag (EFB) emerged. Archaic to modern eyes, the EFB was a rugged combination of screen and keys in a unit not unlike a handheld computer. The magic of the flight bag had gone, but the saving in fuel burn across the world’s fleets that resulted from carrying less paper was more than worth it.
More recently, the iPad found its way into the cockpit. Adding connectivity to the traditional capabilities of the EFB, the iPad links crews with their operations centres and maintenance departments; it also provides the latest, detailed weather and helps them navigate unfamiliar airports. The iPad holder has become an essential cockpit fitting.
Now Honeywell Aerospace has devised its own kind of magic: the Anthem connected cockpit. It seems as though the industry has seen ‘connected cockpits’ before, but not like this, because Anthem connects to the cloud.
Ryan Lees, Honeywell Aerospace’s president for Europe, Middle East, Africa and India, explains that Anthem delivers everything we’ve come to expect from a ‘connected cockpit’ – and more. “It’s connected in all phases of flight and even before the flight. Pilots can upload a flight plan from their hotel room, customise the cockpit displays and plan the entire flight through Mission Manager. We believe it could save as much as 45 minutes of in-cockpit planning and start-up time.
“That planning goes right into the detail, too. A pilot could tell the system that at a certain point in the flight they want it to send a text message to the caterer or fuel truck to have them ready on the ground. With the aircraft connected in flight, those requests trigger notifications on the flight deck for the pilots to action with a simple click.”
Maintenance data is downloaded and uploaded as appropriate, of course, but pilots may also remotely check fuel levels, for example, via the cloud. The aircraft doesn’t need to be ‘on’ for the system to work, either, because all the data is in the cloud and is downloaded the instant the aircraft regains connection to a network.
Anthem also enables secure Internet browsing, on one of the cockpit displays, via the aircraft’s connectivity pipe. “It means pilots can connect directly to Forge Flight or other flight planning applications, or view airfield webcams and websites,” Lees enthuses.
Authorised users may also access all the Anthem information separately, so everything the pilots input and see is available to maintenance and operations staff, while any issues emerging on the ground – perhaps as trivial as a caterer being absent because their truck broke down – are easily communicated to the flight deck crew. Better still, the system is intuitive; in its literature, Honeywell likens the experience to using a smartphone.

System engagement
The full Anthem capability is expansive, but Lees says it is possible to engage with the system at different levels. “It could be as simple as the fuel truck receiving a message saying the plane’s going to be 15 minutes late landing and then will be parked at a particular location, or as complex as a ground department logging in and tracking the airplane to see more data. All of that will be available through the Honeywell Forge Flight platform, which does the analytics and makes the data available in whatever form is useful to the end user; a text message or web dashboard, for example.”
Anthem obviously consumes more data than current cockpits. Connecting should pose no problem, though. Lees notes: “It will use any connection available. On the ground that could be Wi-Fi or LTE. It can use VHF and satcom too. The faster and better the connection, the more information becomes available to the pilot, including the secure cockpit browser, but the aircraft doesn’t actually require a connection to fly safely.”
Stories of airports closing down because of emerging Covid restrictions while aircraft were inbound are not unusual and in a similar situation, Anthem comes into its own. “Imagine landing at a remote, previously unvisited airfield in Alaska,” Lees says. “One pilot could be taking a good look at the runway via the airfield webcam. Alternatively, having learned of the closure, someone on the ground in flight operations could uplink a new flight plan for the pilots to review and accept, at which point it loads into the avionics without additional pilot workload.”

Cockpit configuration
Configuring the Anthem cockpit screens to individual pilot preference is easily accomplished by clicking and dragging, even across multiple screens, potentially creating a two- or even three-screen ‘super map’. Conversely, in a critical stage of flight where only essential data is important, information may be minimised. Further, Anthem includes what Honeywell calls a ‘smart scratchpad’ and which Lees describes as ‘game changing’.
He explains: “A pilot can use either data or speech entry, like a number or destination, and the smart scratchpad will pop up the screen it thinks is relevant to the input and ask the pilot to confirm it. Once they have, it enters into the avionics, avoiding the need for pilots to switch between menus and screens.”
Anthem aims to create an ideal workspace for pilots and yet also has the potential to reduce workload to such an extent that companies nurturing urban/advanced air mobility (U/AAM) craft, usually with the intention ultimately of flying those aircraft autonomously, are among Anthem’s early customers. Lees explains: “We’re building a lot of simplified vehicle operations elements into Anthem, with the aim of reducing crews down to one pilot or, on long transatlantic flights, two. The theme is to reduce pilot workload, make it easier to work the cockpit and do more in advance, all of which demands less of the pilot and moves us towards automation across the aviation industry.”

Future vision
Anthem appears to be everything Lees describes today, but also a vision for the future. “It’s fully scalable from a two-seat general aviation airplane all the way up to an airliner. And the secure cockpit browser adds a level of future-proofing, because data pulled off the web can be loaded into the avionics.”
There is also easy compatibility with third-party apps, and data gathered from the airframe may also be loaded into the avionics. It creates a vision of cloud-shared data in which every aircraft becomes a data node, generating information for others and consuming that which it requires. How will Honeywell keep its customers safe in this shared environment?
“Our philosophy is that the user owns their data. We may have rights to use data but must have their consent before we use it. All the Anthem data goes though Forge Flight but the individual flight department can decide how it wants the data used. It may have a an airframe OEM representative helping with maintenance, for example, and want them to have particular access.”
This is a slightly baffling concept but it helps to consider packets of data, with Forge Flight acting as the sorting room, never opening a packet marked ‘OEM’ but ensuring that’s where it’s delivered.
With Anthem bringing the fully connected aircraft closer to reality, what’s next? Lees theorises: “I think we’ll see reduced requirements for hardware on the aircraft over time, and software becoming far more capable as connectivity and data improve. Thinking about new-generation aircraft, maybe the software solution becomes so good that AAMs won’t need weather radar, they’ll just get the data they need from the cloud.”