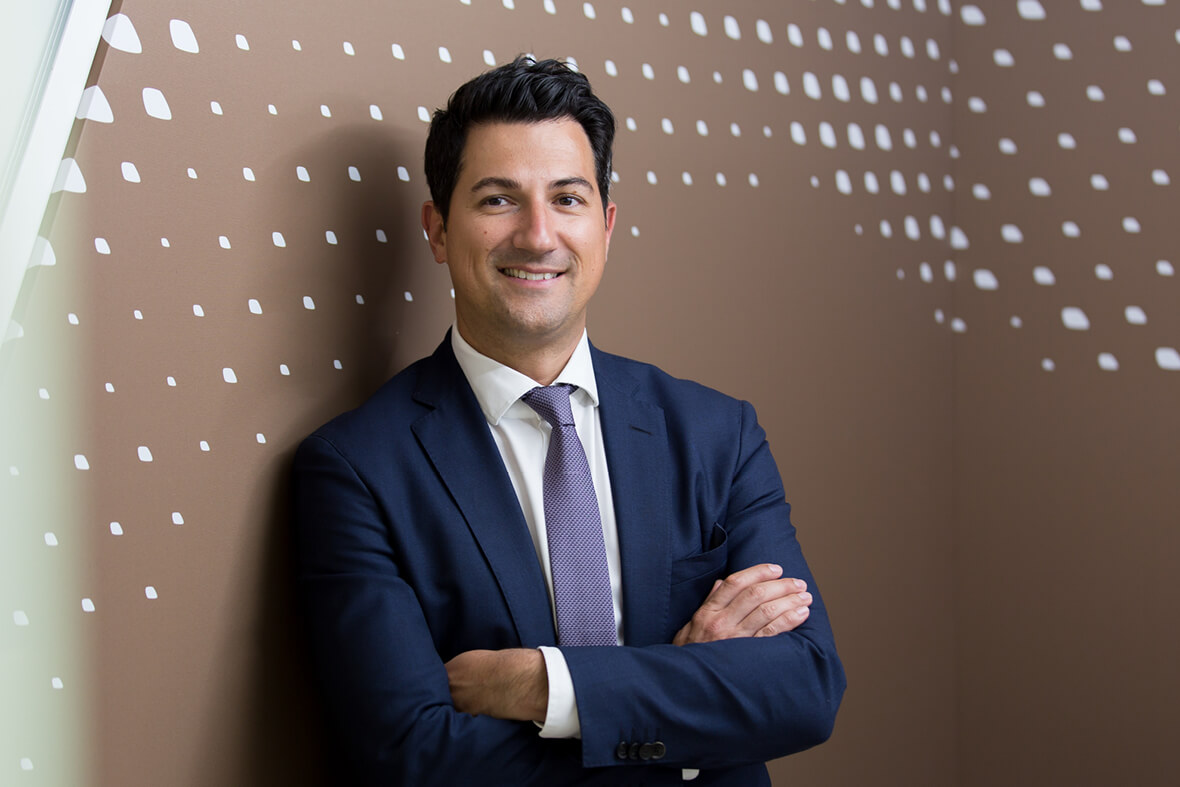 “It seems like only yesterday,” says Head of ACH Frederic Lemos, looking back over the years since Airbus Corporate Helicopters launched at EBACE 2017

Airbus Corporate Helicopters (ACH) celebrates its fifth anniversary at this year’s European Business Aviation Conference and Exhibition (EBACE) event in Geneva. Over the half decade since ACH launched, two EBACE shows were cancelled owing to coronavirus and, through the spectacular machinations of fate at its worst, ACH had the misfortune to bring the superlative ACH130 Aston Martin Edition to market just as the global pandemic struck. They have been a difficult five years.
Nonetheless, ACH has thrived. Under the keen leadership of Frederic Lemos, Head of ACH, the division has come to dominate the corporate and VIP helicopter sector even as external pressures have caused the market to contract. Lemos notes that ACH was responsible for 25% of the 200 corporate/VIP helicopters sold worldwide in 2017 and while slightly fewer than 200 were sold in 2021, ACH was responsible for 68% of them. The market has evolved in ACH’s favour, although its geography remains largely unchanged, as Lemos reports: “80% of our business is in the US, Brazil and Europe, although other areas are opening up, including India.”
Within those markets he says ACH is seeing more younger customers, while the use of helicopters from yachts continues to expand. “Our customers are also using their aircraft on more varied missions. Work, leisure and as a tool during the Covid period, allowing them to travel safely on journeys where they may previously have used a car. Taking a helicopter rather than surface transport is also more secure in regions where personal safety can be an issue.”
According to Lemos, the sweet spot for many ACH customers is 90 minutes – any less and they take the car, any more and they fly fixed-wing. It is worth considering, taking the UK as an example, that 90 minutes in an ACH145 equates to as much as six hours driving.
Last year was ACH’s best ever, with 103 helicopters sold compared to 62 in 2020 and 66 in 2019. It sold examples of every aircraft in its catalogue and Lemos notes a trend of strong sales in the intermediate single category, where ACH took bookings for 30 of the ACH125 and 38 of the ACH130 in 2021; the ACH130 was its bestselling model by some margin.
Interest in the ACH130 has been helped along by the ACH130 Aston Martin Edition, subject of a late 2019 media preview in London and formally launched the following January. It has sold surprisingly well, especially since its availability has so far been almost entirely within the pandemic period. Lemos reports that 14 Aston Martin Editions had been ordered and six delivered by late April 2022, totals he had expected to reach only three years after product launch.
The Aston Martin Edition has proven popular in Australasia, where half the aircraft so far ordered have been sold and especially so in New Zealand, with five aircraft booked. Lemos confirms that the model has been responsible for lively interest in the ACH130 in general and enthuses: “We’ll be showing the ACH130 Aston Martin Edition on our EBACE booth, together with an Aston Martin car.”

Light twin favourite
Moving up the range to light twin-engined helicopters, the evergreen ACH135 booked nine orders in 2021, while the ACH145 managed 13, despite the US$3 million or so differential in price between the baseline models. The larger aircraft’s healthy sales are due in part to the upgraded D-3 model, most obviously equipped with a new five-bladed rotor that brings a noticeable improvement in ride quality and improves the helicopter’s payload.
The ACH145 has also continued to build on its already strong following among yacht owners, where twin-engine safety and reduced maintenance requirements are highly prized. The ACH145 is protected against corrosion as standard and other than regular washing with fresh water in accordance with the maintenance manual, the aircraft typically requires nothing more complex than daily checks for several months at sea. It therefore allows owners to embark their helicopter for extended periods without worrying about finding an authorised MRO. It also offers the smallest footprint of any eight-passenger capable helicopter, enabling it to land virtually anywhere, a capability further prized by the increasing number of ACH customers using their yachts as bases for adventure travel.
Its reliability, smooth ride and comprehensive Helionix avionics suite are probably enough to keep the ACH145 ahead in the growing market to replace older helicopters in the light-twin segment, but ACH plans to tempt buyers further with a facelift of its popular ACH145 Mercedes-Benz Style, expected in 2023. A five-bladed ACH145 will be available for customer demonstration at May’s EBACE event, albeit operating from nearby Archamps.

The new twin
Lemos is particularly excited by the medium-twin ACH160. The H160’s service entry has been delayed a little by Covid-19, in particular its FAA certification, which is now due this year along with first delivery, although the type already has EASA certification and the ACH160 STC has been granted. A commercial H160 is now operational in Japan and ACH160 deliveries are imminent. Meanwhile, the French government has ordered 169 H160M helicopters to replace five different types in military service, with first delivery expected in 2026. The H160M differs significantly from the basic H160, but with three models in production, the Marignane line is going to be busy.
Might it be so occupied with H160M production that ACH160 slots are difficult to secure? Lemos says not. “A production ramp-up had already been planned and, clearly, ACH requires relatively few aircraft. A portion of production has already been assigned to us while the differences between the ACH160 Exclusive specification and H160 or H160M mean those aircraft must be identified on the line at the beginning of production. I think the H160M order represents an opportunity for ACH because of the accelerated production ramp-up, which will accelerate the programme. And the military will fly more than our clients and we’ll see benefits from software updates and other developments more quickly as a result.”
In EVA’s Spring 2020 edition, Benoit Defforge, President of Airbus Corporate Jets, revealed his passion for the ACJ220 as a game-changing business/VIP jet and it is interesting to hear Lemos enthusing over how the aircraft is likely to change the relationship between ACH and ACJ. The latter celebrates its tenth anniversary this year.
Lemos notes that ACJ’s customers have always been potential ACH buyers, but only those customers for the larger end of the ACH offering – the ACH175 for example – have likely been ACJ patrons. With the ACJ220 exposing customers in a new price bracket to Airbus’ premium brands, Lemos expects to see some looking beyond the jet to what ACH has to offer.
Looking ahead, there’s every reason to believe that ACH will continue its dominance of the VIP/corporate helicopter market. The wider Airbus Helicopters entity is focused very much on the future, with multiple technologies under investigation alongside the inevitable eVTOL development. Airbus products are already among the quietest helicopters available, thanks to advanced rotor technologies and the fenestron anti-torque system employed on all ACH models except the ACH125 and ACH175.
As work continues to determine how eVTOLs will integrate into urban infrastructure there is every likelihood that quiet, efficient helicopters will find new favour, offering capability that has been available for decades but restricted due to noise and safety concerns. In this scenario, a quiet turbine-engined helicopter, burning sustainable aviation fuel, responsibly operated and equipped with the latest safety systems becomes a compelling choice for those seeking practical, real-world urban mobility.
Indeed, Airbus Helicopters is developing new safety and control technologies with equal application to eVTOL and rotary-wing platforms such that we can expect a revolution in helicopter capability even beyond today’s high standards. The company is already working towards hybrid propulsion with an electric motor capable of turning the rotors in the event of engine failure, while electro-optical navigation aids, rotor strike warning systems and eVTOL flight control developments all promise to ease pilot workloads, making helicopter flying more intuitive and even safer than it has already become.
Airbus Helicopters is well placed to take a leading role in both future helicopter technological development and eVTOL operations. Airbus Corporate Helicopters may be a small component within that larger segment, but it sold more than 100 aircraft last year and its unique combination of luxury, quality and technology surely mean ACH has more record-breaking years to come.