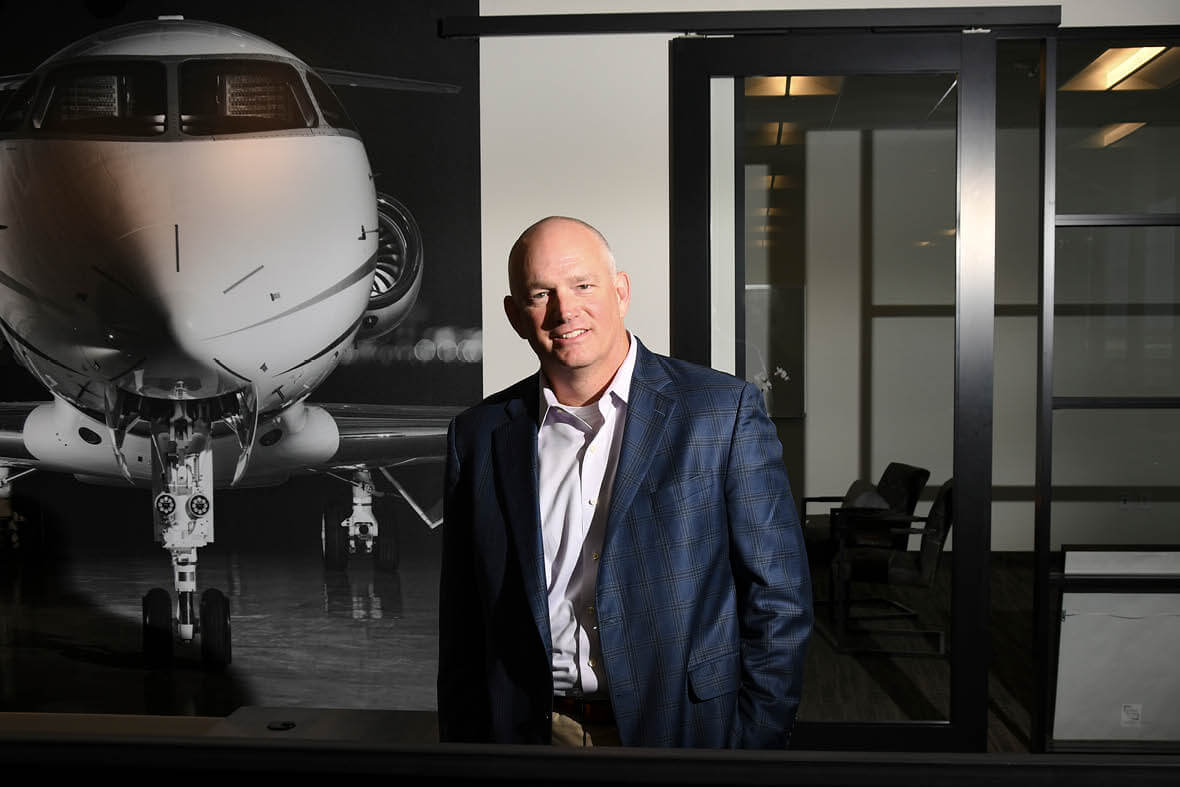 The Mente Group and Four Corners Aviation, its aircraft management arm, are looking towards expansion in 2023 and beyond as they build on Freedom, a unique proposition for corporate jet customers

Now its President and CEO, Brian Proctor founded Mente Group in 2009. An organisation of unexpected depth and surprising capability, Mente Group bears a name that warrants explanation. “When we were setting the company up, three of us sat in a conference room for a couple of days brainstorming a name. We had my attorney on speed dial to see if we could register the name, Jetnet up to see if the name was used in the industry, and we were checking the web to see if we could get the domain. On the first day, we looked at every possible combination of ‘jet’, ‘aviation’, ‘solution’…
“There was a problem with every name we tried. I’d had enough by the end of the day. But I’d studied Latin for four years in high school and I still had my dictionary, so I brought it in next morning. We started looking at ‘air’, ‘bird’, ‘flight’, anything aviation related. Then we looked at ‘speed’, ‘quick’ and other adjectives before I suggested looking at thought, because we’re a thoughtful company. The root word for thought in Latin is ‘mentis’. The ablative case is ‘mente’, meaning ‘with thought’ or ‘with intellect’, and it worked.”
Fast forward to 2022 and Proctor says Mente is all about customers. “We are aviation enthusiasts, we love airplanes and we love flying, but aviation is just the tool we use to help make the world smaller for our customers, to help them enjoy life and live more abundantly.”

Making the complex simple
Look closer and it’s obvious that Mente’s focus is on easing its customers’ transactional journey through aviation. “Around here we like to say that we take the complex and make it simple. When we were working the concept for our recent Four Corners Aviation acquisition, we stopped for 15 minutes to think how many contracts an owner would need to enter into to buy an airplane, operate it for five years and then sell it. We came up with 56 contracts. Mente clears that complexity away; we make clients aware of the costs, eliminating as many of the potential surprises upfront as we can. We want to give them a better ownership experience without taking the fun out of buying an airplane.”
Another important aspect of the Mente philosophy is to ensure the customer is buying what they really need, even if that means not securing an aircraft deal. “It does nobody any good if they discover six months down the line that the airplane’s costing way more than they expected,” Proctor says. “Worse, they could discover it can’t do the things they wanted. We spend a lot of time checking airplanes can operate safely from the airports clients want to use while meeting all their other needs. Then we put the best acquisition method in front of them, whether charter, fractional, whole ownership or fleet.”
Over the 20 years of his aviation career, Proctor says clients have become smarter and aviation more prevalent, so the major part of the educational process is now around understanding cost. “Interestingly, we’ve tracked residual values for a long time – our database has more than 1 million data points – and to us that’s the primary cost driver. We present our clients with the best, worst and most likely value they’ll see after five years so they can build the best business case around those scenarios.”
Mente Group is therefore with its clients from the moment of their first enquiry, through the full complexity of acquisition, to aircraft delivery. And the journey doesn’t need to end there. Proctor explains: “We can also manage their entire airplane operation, either through our Four Corners management arm, or Mente 360, which provides an ongoing, retained consulting arrangement.”

Four Corners Aviation
Mente Group’s customers have the option of placing their aircraft with Four Corners as a complete management platform, including charter if they desire. Proctor expects the managed fleet to be close on 20 aircraft by the end of 2022 and reports sustainable growth targets for the organisation. “We’ve built out infrastructure and feel we could manage up to 30 airplanes. We don’t ever want to be in a position where the infrastructure is chasing the fleet, so we’ll add more people when we go beyond 30. Right now, we’re perhaps a little overstaffed, but when you think of everything that goes into managing an airplane, I’d rather be overstaffed than even a little bit understaffed. It’s too critical an asset to ever get it wrong. Our policy is to find the best people in the industry and give them what they need to drive a very safe, client-focussed operation.”
The management platform has aircraft across the US and that national footprint is set to expand. Proctor is confident that 2023 will see Four Corners exploring possibilities for managing aircraft in Europe too. “We’ve found people like the ethos we present and we’re able to leverage what we’ve been doing well for so long at Mente into Four Corners,” he says.
Freedom
Charter or, more accurately access to business aviation, is an important component in the Four Corners management offer. Its website claims to offer ‘a new way to fly’, but that’s a sentiment relatively commonly expressed among operators. Proctor is expansive in response when challenged to justify the claim.
“We invest a lot of our energy in de‑commoditising charter by working very closely with our customers and we believe we’ll make inroads with our new Freedom programme. It turns corporate jets from an ownership model into a services model. Think of Microsoft Office… 15 years ago we bought discs and loaded the software, but today you have a subscription with Microsoft. We think that’s where the corporate jet industry will go for multiple reasons, but primarily because it changes the capitalisation structure behind the delivery model.
“If we look back to the mid-1970s, a Gulfstream II cost roughly U$2.5 million and the operating cost would have been somewhere between $500,000 and $750,000 per year, about 20% of the capital. Today, if you bought a G700 at $78 million, the operating cost is likely to be between $5 million and $6 million, so the capital has outstripped the operating costs by a significant amount. Where companies are thinking about a return on equity or return on capital investment, if you can return the capital back to the business and they can use it somewhere else where they’re getting a significant return, it creates instant value.
“The Freedom programme gives clients access to an airplane with the same pilots and same facilities. We can basically outsource the whole operation, including the capital, and provide them with an agreement that enables them to have a similar level of service without the capital involved. It moves the airplane from a balance sheet item to a profit and loss item, takes away some of the potential ownership stigma because they are no longer the registered owner, and they know the monthly charge and hourly lease charges are going to be the same over five years when they sign the contract. It eliminates lots of the variability in aircraft ownership and it is primarily for the client’s use although if they want, we can charter it when the scheduling works.”
At the end of the five years, the client can simply end the agreement if they want to, but Mente Group’s expertise has been integrated with Four Corners to provide an ongoing dialogue that ensures the programme continues to evolve with their changing needs, meaning they are more likely to stay with an optimised solution.

Aquila Aviation Ventures
Mente Group partnered with a private equity company to kickstart the Freedom programme, forming Aquila Aviation Ventures as a holding company. Proctor contributed Mente to the arrangement, while another partner contributed Millbrook Air and Pioneer. Four Corners was created as a new operating company with Pioneer beneath it and just prior to the NBAA-BACE show in October, Ultra Air was acquired, also for incorporation under Four Corners – its integration should be complete by year end.
The combination of Mente Group, Four Corners and Aquila as an investment vehicle is powerful and Proctor is planning for continued growth. “Right now, we’re targeting several other companies in terms of acquisition and this time next year I wouldn’t be surprised to see information companies, real estate, FBO and MRO assets under the umbrella.”
Mente gives every appearance of becoming a one-stop business aviation shop. Proctor says the team is even studying the possibility of acquiring a pilot placement agency, but reckons some elements, especially in the aviation legal space, will remain outside its interest. “We want to be a broader solutions company, that’s the fundamental premise of who we are and where we want to go.”