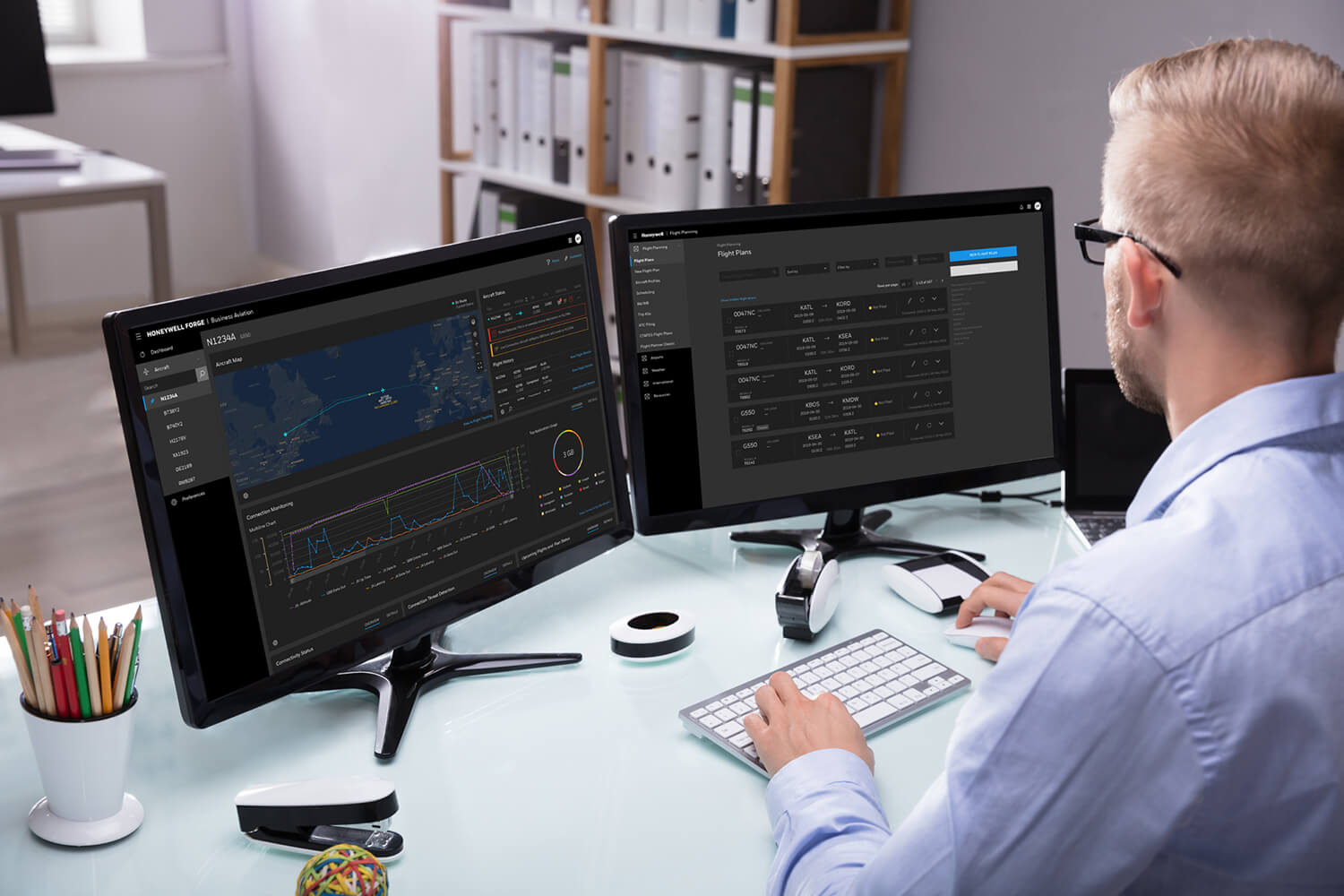 Building on more than a century of data collection, Honeywell Aerospace has introduced its Forge platform, already proven in the airline industry, to business and VIP aviation

Early on in our discussion, Raghed Talih, Aerospace Leader at Honeywell Aerospace, Middle East, exclaimed: “In just 12 flight hours a twin-engined jet can generate up to 844 terabytes of data. That’s almost 27,000 32-gigabyte iPhones!”

It is therefore no surprise that data has become a driving force in aviation. With high-speed connectivity now a reliable reality, the process of gathering data has morphed into one of transmitting data off the aircraft, to flight and maintenance departments, manufacturers and navigation providers. Indeed, ‘fatter’ connectivity ‘pipes’ mean more bandwidth for data, leading to expanded data collection, requiring ‘fatter’ pipes, and so the one has come to lead the other in a sometimes blurred relationship.

An OEM – an engine manufacturer, for example – wants as much data as possible from its equipment. Even data downloaded directly into storage might yield future information about why a component failed earlier than anticipated, how a simple design tweak might save a little fuel, or why one owner’s engines perform so much better than another’s. But for operators and maintenance departments, big data is less valuable. What they really need is data-derived products; think data, but with added value.

Without a product, there’s a risk of collecting data for data’s sake, or falling into the trap of allowing the desire to collect data to overwhelm its usefulness. And it’s important to remember that data in aviation is nothing new. On 17 December 1903, Orville Wright completed the world’s first successful, controlled and powered flight. It lasted 12 seconds, during which he employed real-time data, gathered via a stopwatch and anemometer. What has changed over the subsequent 117 years is the quantity of data we gather and how we use it.

Honeywell Forge
Through merger and acquisition, the history of Honeywell Aerospace reaches back to 1914. The company therefore began generating and using aviation data little more than a decade after Orville Wright realised its first proper application. Honeywell thus has a long and proud aviation data legacy, as Raghed Talih well knows.

“Honeywell has long had the means to collect data from the aircraft. We’ve always been a leader in providing satellite connectivity hardware and services. Our avionics are on many platforms, we’ve provided safety service for cockpits, internet and Wi-Fi for the cabin; it’s a long history of being close to data and data collection.”

Now the company has taken the next step in data exploitation for business and VIP aircraft owners and operators, rebranding its GoDirect product as Honeywell Forge, a system Talih expects to see offering more and more capability as it expands and matures. “The rebranding is in line with what we’re doing on the airline side and overall, across all Honeywell business.

“Forge is essentially an analytic engine. It’s an intelligent, data-driven platform, designed to provide a solution that generates improved aircraft availability and higher profits. In business aviation, Forge connects through airtime and data services and we’ve been providing those since 2015, when we acquired Satcom1, which subsequently became GoDirect. We also deliver datalink services, through our global data centre, a service we’ve been providing for almost 35 years, and we have a security infrastructure and ground services network, enabling secure end-to-end data transmission between the aircraft and operator.”

Talih says Forge is already highly evolved in its airline application. “We have modules including Forge Flight Planning, Forge Flight Efficiency and Forge Ramp. Customers don’t have to buy into the whole offering, they choose the modules most relevant to their business model. We’re in the early stages of taking some of this functionality from the airlines to business aviation.”

In effect, Forge gathers big data and, via its modules, turns it into useful products. As Honeywell develops and optimises it for business aviation, so operators will see the benefits their airline brethren are already enjoying in reduced fuel consumption, predictive maintenance, flight planning and more.
But what happens to the data that Forge doesn’t need? And what about all the data that indicates a system is functioning just fine and therefore has no relevance now, but may become important when the system fails in a year’s time?

“Modern aircraft have hundreds of sensors gathering data. We’re very good at analysing the data and using it to improve operations, especially for predictive maintenance, and that’s all in Forge.

“But we agree with our customers that although we work with their data, they retain ownership. It’s a big deal and not true of all players in the field; there’s a lot to be learned from it and ultimately it can be sold as information. We don’t do that. Any data that isn’t immediately used is saved and remains under the customer’s ownership.”

The relationship actually begins sometime before a Forge customer places the software into service. “Our experts might spend months with the operator, initially introducing data gateways where they don’t already exist, some of which might require hardware upgrade on the aircraft. Then it’s a case of working with the operator to design and implement the data collection and integration system before starting to work with it.”

Controlled Connectivity
Faster connectivity means more data off the aircraft, but also more options for passengers, and Forge helps optimise their experience too. “Imagine two VIPs, both heavy internet users, flying on the same bizjet. Assuming the operator is a Honeywell connectivity customer, the ground ops team can manage streaming and data sharing on that individual aircraft through Forge, ensuring that everyone on board has a great experience. It’s an extremely sophisticated system that we call Data Control Options. As well as ensuring optimum service, it also avoids operators exceeding their data limits.”

Forge is very much the way ahead for Honeywell’s business and VIP aircraft connectivity and data offering. “We’re continuously developing it and adding value. We’re a hardware provider, a software provider and a services provider, and Forge is the umbrella under which we bring those aspects of the business together. It places Honeywell Aerospace in a unique position,” Talih declares.

Airbus reveals the next generation of CityAirbus

GEMINI WINGS adds another plane to their alliance fleet