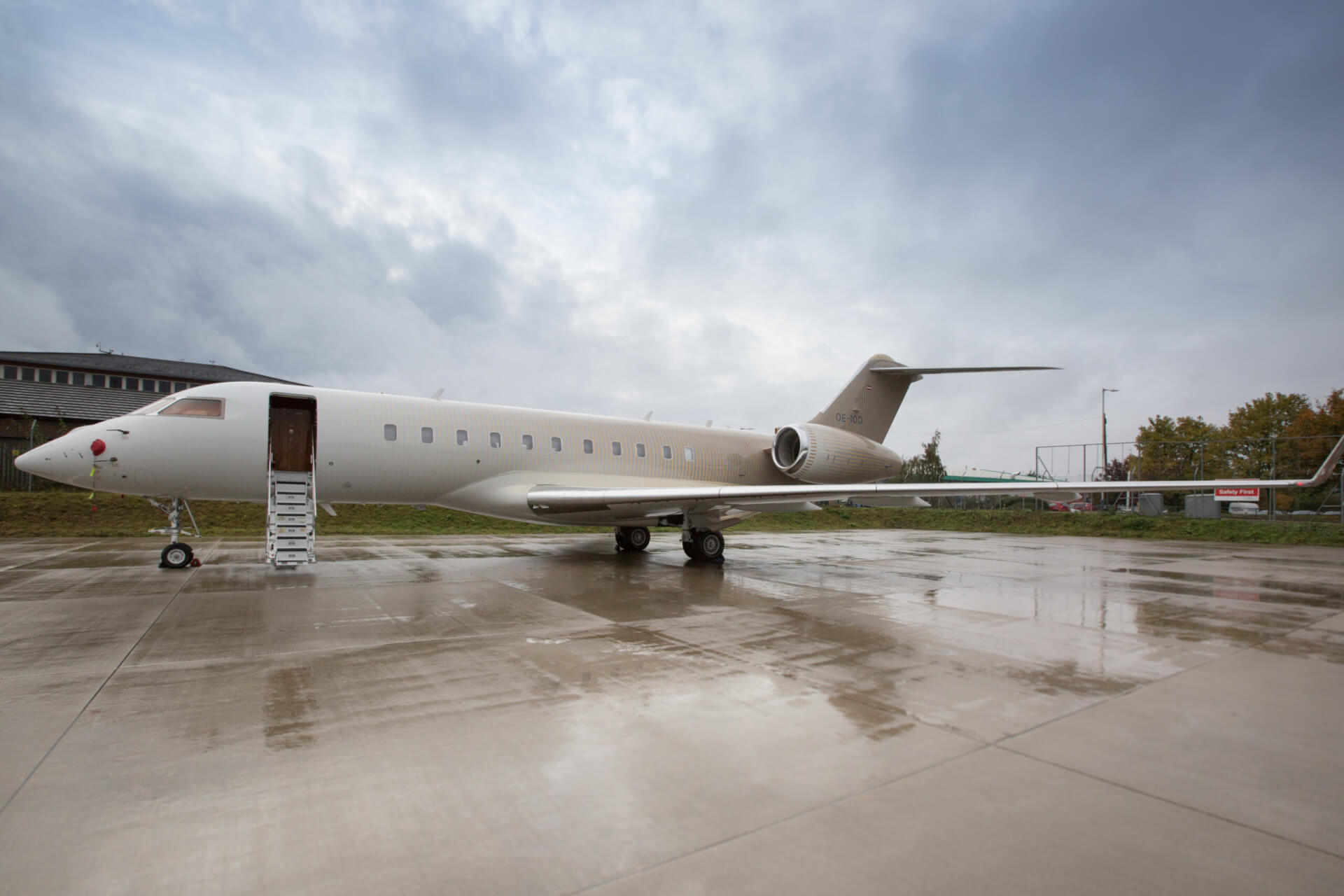 Vertis Aviation offers a personal, bespoke charter experience, but has also proven adept at a variety of challenging COVID-related missions. Chief Operating Officer Catherine Buchanan, locked down in her Dubai home, talked to EVA about the company’s ‘new reality’

Achieving global presence with a small, dedicated team, Vertis Aviation was founded in Switzerland in 2010. It takes pride in delivering the highest standards of bespoke service, marketing five exclusive jets on behalf of their operators – a Challenger 350, a Falcon 900EX EASy, a Global 5000, a Global 6000 and a recently added Embraer ERJ145 – and boasting the capability to rapidly source whatever aircraft type the client or trip requires, all provided with a complete concierge-style support package.

Based in Dubai and previously Vertis CCO, Catherine Buchanan fully stepped up into the Chief Operating Officer (COO) role on returning from maternity leave in October 2019. It’s a fact that says much about the company’s partners, Jeffery Emmenis, Erica Da Veiga and Julian Burrell. They recognised Buchanan’s talent and ensured her career progression on her return. This enlightened attitude to personnel, and the business, pervades the Vertis operation.
New Role
Explaining the difference between COO and her previous role, Buchanan says the CCO position had already given her a global perspective on the business, but now she’s taking a more operational, business-focused interest. “It’s a multi-faceted role, taking in business strategy, targeting, budgeting, making sure we’re running efficiently, working with the sales team in a mentorship role, and being involved in PR and corporate communications. “One of my initial tasks as COO was hiring an internal digital communications manager, primarily because we see digital marketing as the future.”

It is an unfortunate fact that industry executives, often aviation lovers before they came to work, or hooked by aviation once they’d started, tend to spend less and less time with aeroplanes as their careers develop. Speaking during COVID-19 lockdown in early April, Buchanan was pleased to report that during ‘normality’, her trips to the airport were still quite regular. “One of our key strengths is that we offer a very personal, bespoke and consultative product and that involves us going to the airport, seeing clients off and ensuring everything goes perfectly.”

She’s normally a regular flyer between Dubai and Switzerland. “That’s stopped for now, but we all work online all the time anyway. I’d say we’re quite a progressive, dynamic company, in that we have flexible working conditions. We recognise that instead of spending hours on end in traffic jams to get to offices, it’s sometimes more efficient to work at home. It means we’re used to remote working, and well prepared for the actual reality that we’re facing now. Having face-to-face video meetings with colleagues in Los Angeles, Ireland and Switzerland is just part of a normal day for me.”

Today’s Reality
While some business and VIP aviation providers have chosen to shut down until the unprecedented market conditions have abated, others see continued, albeit different operations, as the way forward. Predictably, Vertis has continued. “It wouldn’t make good sense and neither would it be a viable option for us to just shut down,” Buchanan says.

“We’ve had to turn our hand to different areas of general aviation. We’ve been working on repatriation flights, medevac and cargo, as well as chartering as normal in those areas where it’s possible. We’ve actually been busy and the challenge has been really interesting. Repatriation flights aren’t simple, for example. There are essentially two types, governmental, which are probably more obvious in what they involve, and then the personal flights.

“In those, the client is paying for the flight and the operation is very complex. As an example, we had a Chinese family who wanted to get their children back from Europe. We booked a flight and within 30 minutes the regulations had changed and they could no longer go to the airport we’d planned. We changed to a different airport, but then that one locked down. In the end, we flew them to Cambodia and then on a commercial flight home. With the situation so fluid, we’re having to be very reactive. Thinking outside the box is becoming the norm.”

The COVID-19 crisis is creating conditions in which the unique capabilities of private aviation are showing their mettle, but Buchanan is typical of industry leaders in seeing its exceptional achievements as little more than an extension of business as usual. After relating the story about the Chinese family, she reveals that her own lockdown conditions mean she requires a permit to travel beyond her front gate. Many of her colleagues were also working under various restrictions and yet Vertis safely and speedily reunited a family across half the world. Only business aviation gives geographically spaced individuals working from their own front rooms the tools to reach out across continents and bring people home. “It’s incredible, isn’t it?” Buchanan agrees, after a few moments’ thought.

We are all celebrating and looking with new respect at hitherto unrecognised categories of frontline worker – healthcare providers, truck and delivery drivers, supermarket staff and others. Buchanan is quick to recognise the dedication of crews operating repatriation flights. “Across aviation, we have people putting themselves in harm’s way to provide service on board an aircraft. It’s incredible, absolutely frontline work.”

Vertis Operation
Aside from the jets it exclusively markets, Vertis offers brokerage over a wide variety of aircraft depending on client needs. “If we can’t satisfy their needs from our aircraft portfolio, we’ll sub-charter. The fact that at the moment we exclusively offer predominantly Bombardier types is coincidence; our portfolio varies as owners sell or move their aircraft. Having said which, I have noticed a preference in Europe for Bombardier and in the US for Gulfstream. We’re looking to extend our portfolio to include some aircraft in the US and, based on those preferences, that’s likely to include Gulfstream.” As an ARGUS-rated broker, Vertis is heavily audited and implements an exhaustive sub-charter process that ensures its own standards are matched even outside its exclusive aircraft.

Perhaps not unusually in business and VIP aviation, Vertis operates globally with a relatively small staff. Communicating online is therefore essential, but digital training is also critical. “Anyone joining the company has to go through the ARGUS policies manual and our internal manual, then we offer digital training sessions, which everyone does at the same time as much as possible – sometimes it’s difficult to make it work over all the time zones. Every Monday we have a team briefing with everyone on a conference call – it’s seven in the morning in Ireland, 11.30 in India and 11pm the day before in Los Angeles. It’s difficult, but it means everyone gets the same information and everyone is on board.

“We do still have offices, but Vertis is a dynamic and progressive company and we already recognised the benefits of remote working. I feel we’ve spearheaded it over the past decade, while many other people are just coming around to thinking about it because of the pandemic.

“It’s all typical of Vertis. It invests in people, recognises their talent and hones it, and makes it possible for them to stay with us and progress.” Buchanan confirms there was much to learn for her new role. “There’s a lot of continuation from my old role, but the whole business element and the physical running of Vertis Aviation and the financials behind it were new. I had training sessions to get to grips with them all. But there are always new things to learn in this industry and I think the minute you think there aren’t, that’s when you fail.”
Among the company’s latest developments, Footprints is a carbon-offsetting programme launched in March 2020. It’s a typically unusual take on a familiar idea. “We’re paying the contributions ourselves, ensuring all our flights are offset, but we’re also asking clients if they’d like to make an additional contribution. Then, on a monthly basis, we’re donating money to charities and causes that are particularly important to our clients. Because we’ve been flying a lot of repatriation flights from Africa, in our first month we decided to donate to Doctors Without Borders, which is completely aside from carbon offsetting, but we felt it was the best place we could put our money.”

Footprints is a typically diverse, outside-the-box solution from Vertis Aviation’s small, versatile team. Buchanan says: “The diversity in our client portfolio is incredible. We move customers and their friends to sports events by King Air and work the whole spectrum up to heads of state. I believe it’s our consultative process, knowledge and confidentiality that bring people back to us again and again.”

JETMS: The success of the spare parts supply chain lies in finding the right partner

UTG PA and SKYPRO are opening a maintenance center