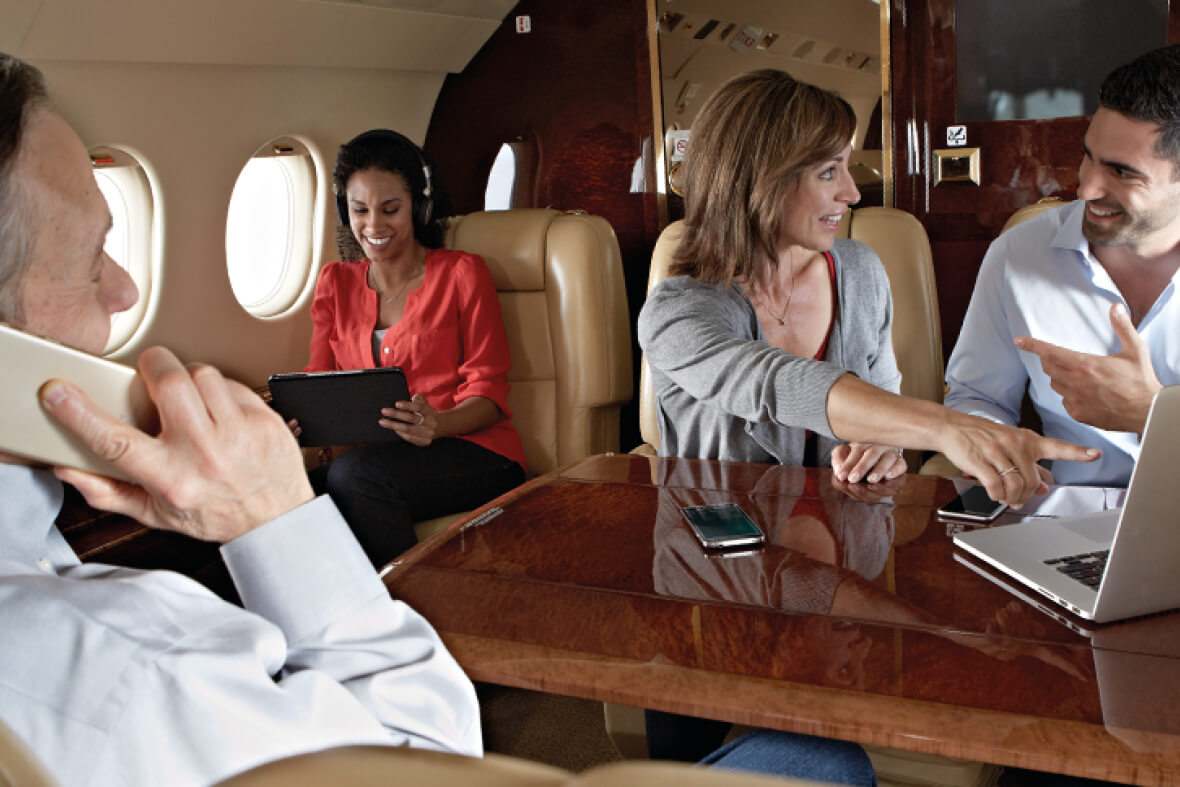 Gogo Business Aviation delivers high-speed internet to customers in North America via a proprietary air-to-ground network through a heady mix of advanced and advancing technology, and ground infrastructure, occasionally in locations so rugged that it requires survival training to reach them. EVA spoke to Dave Glenn, SVP Customer Operations, to find out more

Gogo Business Aviation prides itself on doing customer service really well, and a conversation on the subject with Dave Glenn, SVP Customer Operations, was always going to be interesting. He began with a broad view of Gogo’s customer operations, technical support and network operations. “Gogo is unique because we not only build our connectivity systems, but we also built and operate our air-to-ground [ATG] network. Our people have aviation expertise to support flight departments and fleet operators, but we also have network operations expertise and support a wireless network with equipment at 270 locations, plus two data centres. It’s a complex business because we not only have to support the products we build, but we’re also a network operator with engineers who are constantly maintaining and optimising the network and infrastructure.
“And yes, we do customer service very well, but there’s always room to build, and we know that the customers we support require excellence. They demand that products work well and we know we can’t rest on our laurels.”

It’s a bold statement and tacit recognition that Gogo’s customers expect a product that always works and, on the rare occasions it doesn’t, they want it working again quickly and with a minimum of fuss. Glenn continues: “In aviation at some point everything fails, but how you respond to it determines how you’re perceived. For us, customer service is about meeting expectations, and being easy and enjoyable to do business with. By that, I mean making products that are reliable, simple and intuitive to use. And we never stop working to better understand the changing needs of our customers.”

Talking Boxes
The Avance platform is a key component to Gogo’s customer service capabilities. When customers have Gogo’s Avance hardware installed, the company frequently recognises developing problems before they become aware of any issue. “Avance was designed to facilitate customer support, over-the-air updates, and remote diagnostics. It’s more than an LRU or box on the airplane, it’s a platform that is the digital engine that drives our systems,” Glenn explains. “The Avance platform is self-diagnostic and regularly communicates with our Business Systems Gateway, the BSG. The Avance software ‘talks’ with the BSG, passing it up to 160 different message types which are used for analysis on the ground. By developing our Gogo artificial intelligence, we analyse the different messages to determine the appropriate action.”
One of the very practical and useful messages that now gets sent is what LRU is installed on which aircraft. Glenn explains: “This simple feature now makes it much easier for flight departments and especially fleet operators to track what ATG equipment is onboard each aircraft. It has resulted in better and more accurate troubleshooting when an issue arises.
“We’re also fine-tuning our AI to provide meaningful, actionable data for Gogo and the flight departments so we can proactively address problems before they become AOGs. That means we’re opening tickets, calling the customer and telling them we see their box isn’t working as well as it could be. We can pick the phone up and say, ‘you had a problem, but we fixed it’, or ‘you have a problem let’s work together to fix it’.”
But surely it means a difficult conversation? When a customer calls with a problem, the conversation isn’t expected to be an entirely happy one, but when a company calls to tell the customer the equipment they supplied is about to fail, isn’t that a tricky proposition? “It’s not,” Glenn says. “We’ve seen that maintenance departments really appreciate it because it turns an unscheduled maintenance event into a scheduled event, thus avoiding an AOG situation. But it’s not always about AOGs, sometimes it’s about optimising performance. DOMs want to know if something’s not right and they don’t want to be the last ones to know. We had a recent issue where the Avance system was working, but we identified that one of the air cards was not operational, so the performance wasn’t optimal. They were really pleased to find out from us that we identified the problem and we fixed it.”

Gogo is doing a really smart job of monitoring system performance, detecting emerging issues and usually fixing problems remotely and much more quickly. In fact, it resolves most issues remotely. But what happens when a customer calls Gogo customer support? Can the person who answers actually help?

Real People
“In customer operations the most important thing is having responsible, talented people with expertise to solve problems,” Glenn believes. “It’s also important to design products that are reliable and maintainable, with self-help tools that are easy to use and understand.”

Based on many years working with and for service organisations, Glenn says the linear extension of a support network as its customer base grows makes little financial sense. The key in Gogo’s case is to have the right people supporting its products and network. Gogo also works to make its systems as reliable as possible and ensure they are updated, while providing the best possible tools to the customer service team to enable remote troubleshooting.

“Personal care is one of the tenets of our vision,” Glenn says in response. “We have the technology, good equipment and reliability, but what’s important is how we respond when something breaks. When they call, they want to talk to someone, not an automated system. We have consistently been rated number one in customer support and it’s because of our people. We have the tools in place to support them but it’s the people that make the difference.”

But the fastest way to fix something is by avoiding an issue before it happens. That’s why Gogo is currently working on being able to update LRU software remotely, enabling it to add features and fix software issues faster and more easily.

“When people call us, we have a team of aviation, wireless communications and internet experts to resolve issues, 98% of which are done remotely. It’s the quickest and cheapest way to do it and it makes the customer happy. There’s a small percentage that require ‘hands on boxes’, so we invested in our field services support team, which puts mechanics on site at the busiest US business aviation airports much more quickly.”
Another Gogo tenet is transparency and when it comes to maintenance and reliability, the company has developed its DASH app and web portal, which allows aircraft operators to see exactly what their systems are doing. “It means that a DOM, for example, can see how the Gogo system onboard is performing,” Glenn explains.

This is a very different paradigm from when the DOM was the last person to know something wasn’t operating properly, because now they know and can take action. “Allowing a DOM to work on a corrective plan, have insight into a problem and work on an action plan before the aircraft lands is vitally important,” Glenn notes.

“DASH also enables people to self-serve with some of the more frequent questions, like, ‘How do I upload movies?’, ‘How do I connect a device?’. And it gives them a near real-time view of how the system’s working. In the past we’ve had people call and say something wasn’t working when maybe four people had their devices connected properly and one didn’t, and it was how they had attempted to connect that was causing the issue not the system itself. DASH shows that and it helps us understand the issue and the DOMs explain to their principals how to avoid it.”

Gogo’s ATG service reaches across the US, and north into Canada and Alaska. But some customers also subscribe to a global service. The Avance platform can integrate with satellite systems and is able to switch between ATG and satellite bearers as the aircraft moves out of tower range. Predictably, as they travel beyond the US, Gogo’s customers take its support package with them.

Network Operations
Every time a business aviation customer connects a device to the Gogo network, they really are standing on the very tip of the virtual iceberg. Beneath them, a massive ground infrastructure is constantly serviced and maintained.

“It’s one thing to design a network, it’s another to deploy it and keep it operating at peak levels, especially when thousands of aircraft are connected,” Glenn says.
And Gogo’s towers aren’t always in easy-to-reach locations. Glenn confirms: “Some are on mountaintops where they get several feet of snow per year, others are in the desert – the conditions get pretty harsh. Our field techs send us photos showing snow caves in the mountains and rattlesnakes in the desert. They go through survival training but even so, reaching some of those towers can be quite an adventure.

“Sometimes we take the network for granted, but it’s hard work out in the field, managing towers that have to bear the weight of the equipment and still withstand hurricanes and blizzards. We’re currently working our ground infrastructure in preparation for 5G technology, which we’ll release in 2022. The analysis, testing and construction on towers have begun. Gogo 5G will work in concert with our current technology to provide the best possible service as the appetite for bandwidth continues to grow.”

Dedicated to Business Aviation
Back in December 2020, Gogo completed the sale of its Commercial Aviation business to Intelsat. The benefits to Gogo and its customers are that Gogo is now singularly focused on serving business aviation, and it is much stronger financially which greatly enhances its ability to invest in development of innovative products and new growth opportunities, including Gogo 5G. The deal ensured that Gogo would still own and operate the ATG network, which is critical for business aviation, and Glenn revealed some other interesting observations.

“We saw network usage peak in the 2017 time frame, after which the larger airliners, those capable of taking a 2Ku satellite system, began moving away from ATG. The result was that available capacity on the ATG network increased exponentially for our business aviation customers, especially in the east and west corridors, where we saw a really nice improvement in available bandwidth.”

Glenn also notes that Gogo has seen strong interest in aftermarket Avance upgrades and that, even during the worst months of pandemic, those aircraft that were flying tended to use considerably more bandwidth than had been the case in 2019. As US business aviation traffic returns to or, increasingly, on a month-by-month basis, exceed 2019 levels, he sees that trend continuing.

It’s clear from taking with him that Dave Glenn takes huge pride in his customer service team. He acknowledges that system capabilities are crucial to Gogo customers and that how the company fixes issues is a key component within that proposition. But, noting that business aviation is a small industry in which word of mouth still matters, he emphasises that he and his teams invest considerable time and effort into ensuring their customers feel good about doing business with Gogo.