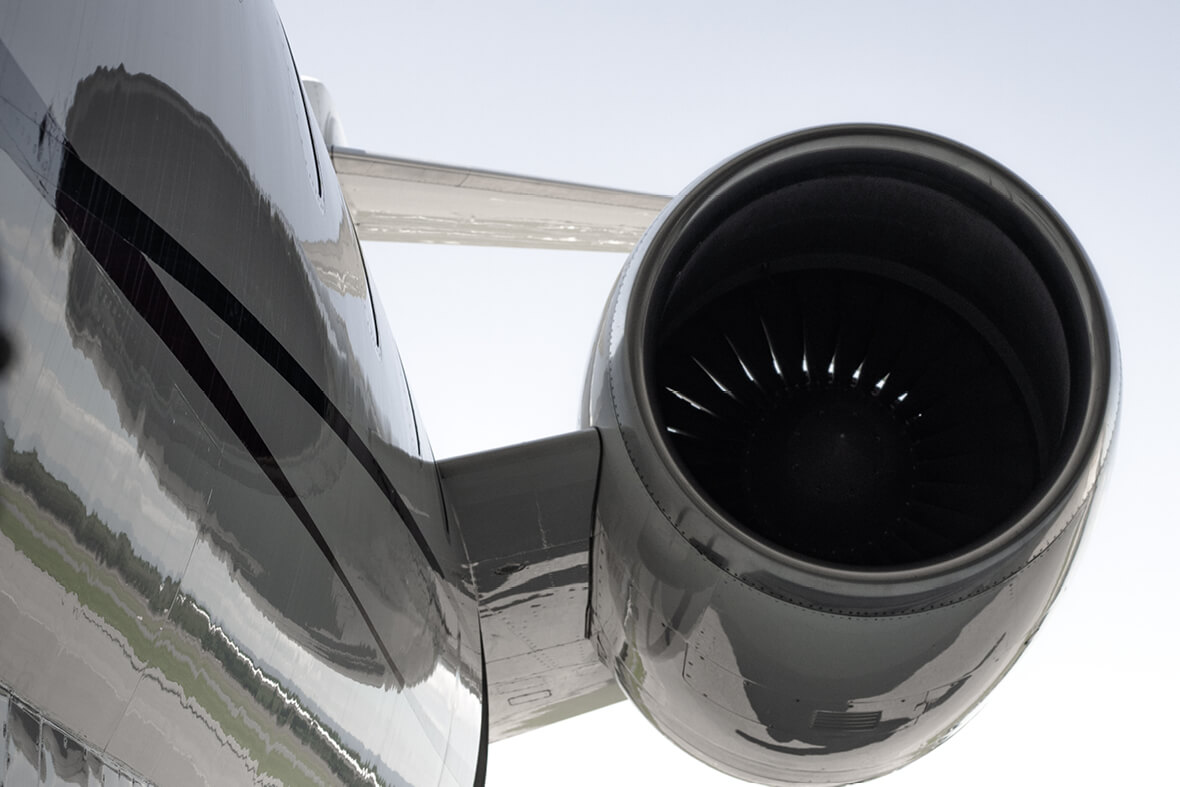 Stephan Krainer, CEO at PRIMUS AERO, has big ambitions for the Austrian company. “Our target,” he says, “is to be the largest CAMO in the world”

When the CEO is tied up in a late-running call, it’s not unusual for a media or marketing manager to start a Zoom interview with a brief introduction and apologies. Stephan Krainer, CEO of PRIMUS AERO was, indeed, caught on a previous call, but Marketing Manager Anna Gletthofer was ready for a frank conversation covering company ethos, the office, the airport, how she wasn’t a plane geek – yet – and how much she enjoyed her work.

There was nothing guarded about her opinions and she clearly spoke from the heart, calling out to colleagues who came to wave and say hello as she described their roles. To your correspondent’s eyes, they were all disarmingly young; thoroughly professional, but definitely young. Five minutes in, a smiling, bearded youngster bounced into view… “Here’s Stephan,” Anna announced, shooing him away into his office to take the call.As we wait for him to sign in, Anna explains: “Lots of our people are aged around 30, but then many are younger and some under 20. I think it’s remarkable. Also, I started here at the end of 2019 and by the beginning of 2020, just before the pandemic, we were up to 14 staff. Now, from September, we are 24.”

An independent continuous airworthiness management organisation (CAMO), PRIMUS AERO is a decade old, yet clearly remains a young and rapidly expanding company. It seems too, that the team is simply having a good time, an impression Anna confirms: “We really enjoy ourselves. We’re all around the same age, we get on well with one another, we laugh a lot and Stephan is generally really relaxed around the office. It’s a very special company.”

At which point, Stephan appears on screen with an immediate challenge. “Guess how old I am?” “36?” “Just turned 42!” His demeanour, an usual combination of calm professionalism and fun, manages to transmit through the slightly wobbly connection between the UK and Austria. How has he managed to create a like-minded team?
“It’s taken a while to get the right mix. We’ve had some people join and then leave us because they didn’t fit in. Now I think we have a team of over-achievers. They all want to get things done, everyone is driven and behind the vision.”

Stephan has spent his entire career in aviation; he claims an inability to do anything else. “I was always interested in aviation as a child. I wanted to be near aircraft, although I never wanted to be a pilot. I love planes because no machine is more complicated. There are so many systems and structures, all needing to work together, under extreme conditions. It’s unique. Every time I walk out to an aircraft I think: ‘Wow, that’s so cool!’.”

Aviation fascination
His fascination with aviation began around age 11, when a friend introduced him to the German Flug Revue magazine. “It had the YF-22 on the cover and he told me about it. I’ve read Flug Revue ever since. Later, I studied aero-engineering at a military school, before serving my conscription with the Austrian Air Force. We were working with the Pilatus PC-6 and sometimes I got to go flying.
“Then Austria got its first Hercules and began flying internationally, including into Kosovo; we worked as many as 100 hours per week to generate eight weekly missions. It was just sleeping and working, but it involved aircraft so it was fine. Now, our office is close to the airport, and every plane I hear, every helicopter, I look out of the window to see what it is.”

Passion and deep aviation understanding are therefore driving factors behind Stephan’s drive to see PRIMUS AERO successfully expand. By year end he expects the staff to number around 30, even as working practices evolve. Among the company’s services, aircraft inspection traditionally involves team members going to the aircraft and its records, but the latter part of the work has increasingly become possible online. “Most operators still use quite a lot of paper,” Stephan admits, “but then the digital records will include photos of the paper.”

Recruiting technicians with the necessary experience and diligence required for inspection work is not easy, but PRIMUS AERO typically takes people from the hangar floor. “Most have a Part 66 licence on the aircraft types they work with,” Stephan says. “It’s a big advantage for the customer, because if they have a technical problem and call us, the person they speak to knows the plane, not just the paperwork.”

PRIMUS AERO is set up to deliver this type of service to a high standard, yet few of the possibilities it offers are unique, or even rare. There are plenty of CAMOs to choose from in Europe alone, some of them also cheaper. What makes PRIMUS AERO special?

Stephan is clear. “We have our own spare parts and logistics department. A CAMO is often no more than three people, maybe working from home. They usually don’t have the resources to monitor an AOG 24/7, for example. We can do that. And when they have a request to the MRO for spares, even if it’s an AOG, it ends up on the AOG pile. We take it personally. If we can’t find a courier or if the costs are too high, we jump on a plane, collect the part and deliver it to the customer. I think that’s unique.”

The company has dedicated logistics experts working alongside its technical team to ensure parts are moved quickly and efficiently. They apply the same level of personal responsibility to customers as their colleagues, to the point where, Stephan reveals, a part was showing in a leading international courier’s tracking system as being in the US when the team had in fact already had it installed on the AOG. Meanwhile, PRIMUS AERO’s own parts stock is literally in the office, or at least in the adjacent warehouse.
The PRIMUS AERO team is not only young, but also diverse. Stephan believes the structure is a result of the company ethos. “We’re so dynamic, so fast growing, that younger people seem more able to keep up. You generate a certain gravity, a way of presenting your company, you’ll see it in our social media for example, and we use that to help us find staff, but it tends to be less attractive to older people.

“We had someone apply for a partnership programme, for example. He said he wanted to retire in five years and that was no use to us because in five years we plan to still be in the middle of that programme. For our technicians, the aviation experience is essential, but for marketing and other positions, we really need people who understand Instagram and other media and are ready to learn about aviation.”

CAMO Explained
Alongside its essential CAMO offering, PRIMUS AERO offers several services. Stephan describes them in detail. “If you consider the entirety of aircraft maintenance and technical compliance as a human, then the CAMO is the head, it tells everything else what to do. The CAMO sees everything, identifies problems and tells the body how to solve them.” Conscious that by offering too much an organisation may end up doing nothing well, Stephan keeps a laser focus on the technical aspects of CAMO.
“We know where we can get the best value spares, we know the best MRO facilities to send our planes to, and who to contact when a plane is AOG. In Europe we usually know the MRO personally; sometimes we even know the technician working on the aircraft.”

Sitting neatly alongside its CAMO, PRIMUS AERO offers aircraft management, a service enhanced by its unique spare parts inventory and team of dedicated experts. “It means we aren’t the cheapest, but it’s not our goal to be cheap. We chose the company name to indicate the best. It’s our driver. We don’t have the cheapest annual charge, but if you look at the entirety of the service, including spare parts, we are very competitive.”

To demonstrate the point, he describes the case of a spare wheel for a well-known older model jet. List price is around $65,000 but PRIMUS AERO could supply the same part for approximately $40,000. That’s a saving that goes a long way towards covering the annual charge.

Stephan himself still becomes involved in the aircraft inspection side of the business and, when he spoke to EVA, was looking forward to visiting Malta the following week to inspect an aircraft as it came out of maintenance, and another for an AOC recertification. PRIMUS AERO also performs inspections for asset management and appraisal, and for banks when there is a repossession.

“Again, we aren’t the cheapest, but we go into more detail than standard inspections. We check that maintenance bills have been paid on time, if maintenance programmes are up to date and no issues remain open, because those are usually the first things neglected when an owner is short of money.”

Considering once again PRIMUS AERO’s parts holding, in some cases the company helps owners make money from their spares. “Some of the parts are pooled and we loan them out as required, for a small percentage of their value per day. Afterwards, they are inspected, refurbished if necessary, and come back into the warehouse. It means parts aren’t left on the shelf collecting dust, they generate revenue. The most common parts in the scheme are wheels, which are always in high demand.”

For the time being, PRIMUS AERO is EASA certified and working on obtaining Turkish approval. “Based on our EASA approval we could add any approval we needed to suit customer requirements. Brexit hasn’t caused us problems because the organisations we work with were well prepared, but we are now seeking UK approval too. It would mean we could do UK AOC work on the continent.”

PRIMUS AERO has continued to grow through the pandemic and as a forward-looking company has big plans for the future. Stephan enthuses: “We were looking at growing the brand internationally even before COVID. Austria is well positioned to serve Europe, but it’s difficult to reach customers farther away. Just this week we had a request from Mongolia. The time difference makes serving Mongolia from Austria a second-best option.

“So we’re building a partnership network of PRIMUS offices, with the first coming online in Lisbon and the second in Almaty, in September. Next will be the UAE, and the plan is to have at least 50 PRIMUS offices under our umbrella with access to our system, knowledge base, marketing and spare parts. Our target is to be the largest CAMO in the world.”