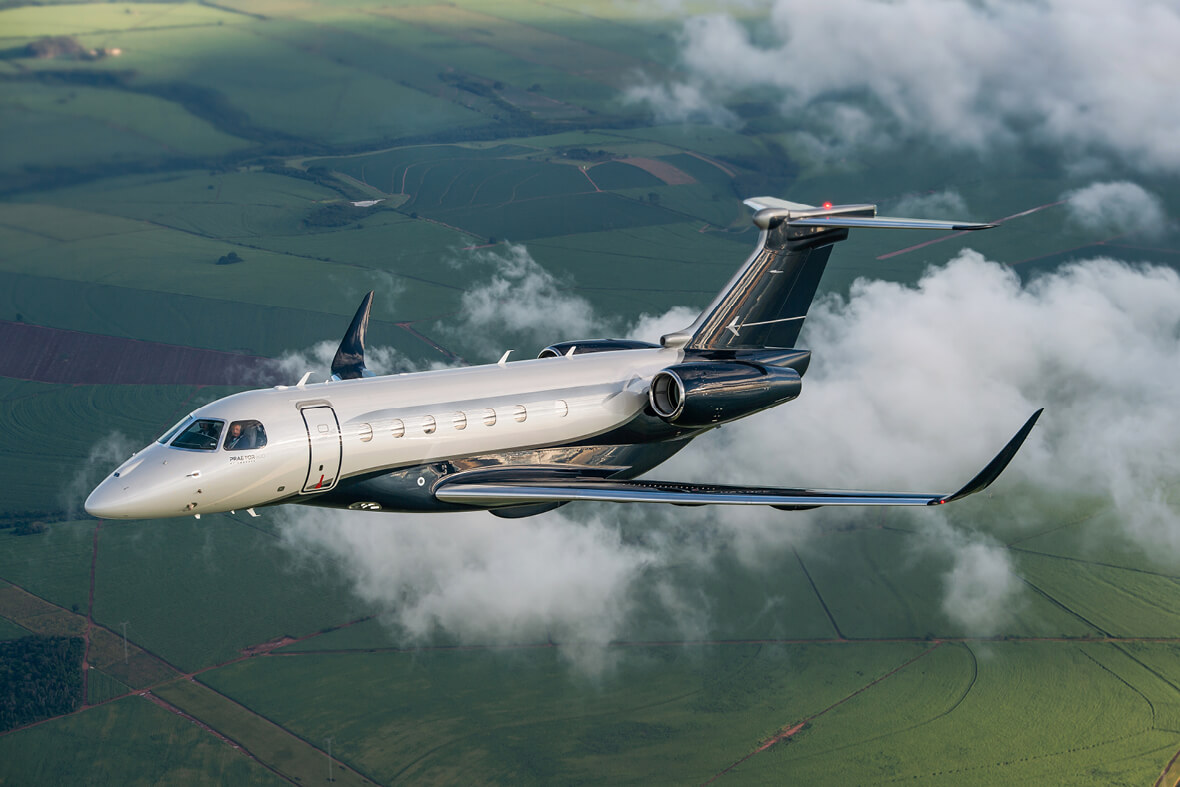 Embraer has only been in the business aviation industry for 20 years, after delivering its first Legacy in 2002. And yet its portfolio of four class-defining aircraft, each based on original clean-sheet designs, includes the Phenom 300 series, consistently the best-selling light jets for a decade

In February 2022, Embraer announced figures from the General Aviation Manufacturer’s Association showing that its Phenom 300E had been 2021’s best-selling light jet and the best-selling twinjet business aircraft across all categories, with 56 deliveries. Most remarkably, the announcement marked an era during which the Phenom 300 series had been the best-selling light jet for ten years.
Embraer has sold more than 640 Phenom 300s since the type’s introduction in December 2009, an impressive total made more so by the company’s relative youth as both an aircraft manufacturer and business aviation OEM. At the 2000 Farnborough Air Show, Embraer announced its entry into business aviation with the Legacy, a large-cabin jet based on the ERJ135 airliner. That aircraft became the Legacy 600 in 2005, coincident with the launch of the Phenom programme.
Today’s Embraer Executive Jets portfolio comprises the Praetor 600, Praetor 500, Phenom 300E and Phenom 100EV. The Phenom family has evolved by embracing the latest technologies and engine enhancements to remain as desirable today as the original Phenom 100 was when it was first delivered in December 2008. Meanwhile, the midsize Praetor 500 and super-midsize Praetor 600 continue to challenge traditional perceptions of jets in these categories.

Praetor 600
Capable of covering 4,018nm with four passengers, their baggage and reserves for a 200nm diversion, the Praetor 600 offers truly extraordinary range performance for a super-midsize jet. Remarkably, that reach is possible from a 4,436ft runway and, where airfield performance is the critical mission factor, the Praetor 600 will comfortably operate from a runway as short as 3,000ft. First delivered in 2019 as a Legacy 500 enhancement, the Praetor 600 carries more fuel under a larger wing/fuselage fairing and features taller, more elegant winglets, besides other changes for extended range.
Sao Paulo to Miami is an easy hop at long-range cruising speed, while the Praetor 600 takes London to New York in its stride; in fact, it could make the return journey too, without refuelling, should the need ever arise. And all of this at 45,000ft, where the cabin altitude remains a comfortable and best-in-class 5,800ft, helping passengers arrive feeling fresh after a restful or productive flight.
The Praetor 600’s 7,528lbst Honeywell HTF7500E engines provide for surprisingly sprightly take-off and climb performance, a 466kt high-speed cruise and maximum speed of Mach 0.83. Most importantly, the HTF7500E features dual FADEC and other advanced technologies for exceptional fuel efficiency and lower emissions, plus simplified maintenance for reduced downtime and costs.
Up front, Praetor 600 pilots enjoy the only fly-by-wire controls in the super-midsize segment, complete with sidestick controllers. Optimised for the aircraft, the Collins Aerospace Pro Line Fusion flightdeck includes four primary cockpit screens, synthetic and enhanced vision systems, and a head-up display, helping reduce pilot workload, improve situational awareness and create a cockpit environment that is both ergonomically optimised and comfortable during long-range missions.
The cabin avionics are also comprehensive, but never intrusive. The Praetor cabin is about having entertainment, connectivity and environmental control available when required, summoned by the wave of a hand or the push of a button, but otherwise sitting in the background waiting to be called. Uniquely for its class, the Praetor 600 is equipped with Gogo AVANCE L5 air-to-ground and Viasat Ka-band satellite connectivity, and its Honeywell Ovation Select cabin management system helps passengers make the most of the possibilities that level of connection allows.
Conversely, the Praetor 600’s cabin is surprisingly quiet. It is worth listening carefully because the lack of noise in cruising flight is initially counterintuitive. Embraer’s cabins have come a long way since the first Legacy was delivered in 2002. With a flat floor and 6ft floor-to-ceiling height, the Praetor 600’s cabin is surprisingly spacious. That space is used well thanks to the standard full galley and exquisite overhead touchscreen tech panels, which remain dark and unobtrusive until needed – a hand movement is then sufficient to wake them. The optional Bossa Nova interior is stunning.
With stitching options reflecting patterns found in the pavements of Rio de Janeiro and Ipanema Beech, the Bossa Nova cabin tells a visual story inspired by Brazilian culture. The cabin of this state-of-the-at aircraft also entertains and engages. Fine leathers, smooth veneers and cool, turned metals combine and contrast to provide an interesting haptic experience as well as a comfortable place to work or rest.
The Praetors have their origins in the clean-sheet Legacy 450 and 500 designs, first revealed in 2007 and launched the following year. Seating up to 12 passengers, the Legacy 500 very closely matched the Legacy 450, but with a lengthened fuselage. Embraer might have simply ‘inserted a plug’ and filled the additional cabin space, but instead it reconfigured the cabin window positions so that every seat has the same perfect view, a detail design decision carried over to the Praetor 600 and which passengers always appreciate but most likely never know about.

Praetor 500
Optimised for seven passengers but capable of taking nine in comfort, the midsize Praetor 500 is a Legacy 450 development featuring all the additional characteristics of the Praetor 600, including 5,800ft cabin altitude at 45,000ft and the same high cruising speed, in an aircraft with 3,340nm of range carrying four passengers and reserves.
Remarkably for a midsize jet, the Praetor 500 offers the same line-fit AVANCE L5 and Viasat Ka-band connectivity as its larger sibling, keeping passengers connected over flights that could be almost eight hours long – the aircraft can reach Europe from the US West Coast non-stop. For shorter-ranged missions, the Praetor 500 accesses many limited runways, taking off for a 1,000nm trip in just 2,842ft, for example.
Legacy 450 owners have the option of upgrading their aircraft to Praetor 500 standard. Embraer completed the first conversion for a European customer in December 2020, by which time 11 previous modifications had been completed in other territories. The work adds 440nm of range and, among other changes, involves replacing the level-sensing wiring in the fuel tanks, moving the over-wing gravity fuelling ports and fuel measurement system, and reinforcing the wing ribs. Updates to the flight control system are also implemented, including a new Pro Line Fusion avionics load.

Phenom 100EV
Just five years into its business jet journey, Embraer announced a clean-sheet entry-level aircraft in what was then considered the very light jet category. Designed for single-pilot operation – indeed, designed for owner-pilot operation – the Phenom 100 flew for the first time in July 2007, ahead of first delivery in December 2008. Since then, the aircraft has evolved through the upgraded Phenom 100E to today’s Phenom 100EV, with more powerful Pratt & Whitney Canada PW617F1-E engines and avionics upgraded from Garmin G1000 to G3000.
The Phenom 100 usually accommodates five passengers, four in a club arrangement and one in the erstwhile co-pilot’s seat, but is capable of seating seven. These are accommodated as the club four, co-pilot’s seat, optional belted lavatory and a side-facing seat in place of the standard refreshment centre, opposite the cabin door.
The latest OvalLite cabin design includes a choice of 11 themes, each making the most of the natural light falling through the Phenom 100’s large windows. A solid, stowable pocket door separates the rear cabin lavatory and optional storage cabinet from the rest of the cabin; even this private area has cabin windows.
Considering this is an entry-level jet, the avionics suite is surprisingly comprehensive, including a synthetic vision system, graphical flight planning and windshear detection, all integrated into the Garmin G3000-based Prodigy Touch flightdeck. The Phenom 100EV will fly 1,178nm non-stop and cruise at 406kt when speed is of the essence, and it will take off in 3,190ft at maximum weight.

Phenom 300E
Similar only in basic configuration and name to the Phenom 100, the swept-wing Phenom 300 first flew in April 2008, for delivery from December 2009. Larger and faster than the Phenom 100, the Phenom 300 is nonetheless still suitable for single-pilot operation, in which configuration it can seat ten passengers. The standard configuration is for eight passengers and its larger cabin compared to the Phenom 100 allows for enhanced comfort, albeit the cabin cross section is common between the two types.
A little elementary mathematics reveals that since the Phenom 300 has been the best-selling business jet for the past decade, it must first have reached that level of ascendancy little more than two years after entering service. Embraer has not allowed that early success to hinder development by resting on its laurels, however, introducing the Phenom 300E in 2018. This included Prodigy Touch avionics and new cabin options, a standard further improved with the 2020-specification Phenom 300E.
The latest Phenom production standard features the OvalLite cabin, with options including the Bossa Nova Edition, which shares features with the larger Praetors. Its more powerful Pratt & Whitney Canada PW535E1 engines are good for a maximum of Mach 0.8 or a 464kt fast cruise, while range with four passengers and 100nm reserves is 2,010nm after a 3,209ft take-off run.
In the cockpit, the Phenom 300E includes all the features of the Phenom 100EV, plus a unique Embraer-developed runway overrun alerting system. The cabin is equally well equipped, with an optional drop-down monitor, the nice HD cabin control system from Lufthansa Technik and the impressive tech panels of the Praetor. The nice HD system enables portable device integration and wireless audio/video streaming.

Customer support
Embraer owns service centres in North and South America as well as Europe, with additional authorised service centres spanning the globe, while its aircraft are engineered for easy maintenance and support in daily operation. The company is also heavily committed to industry and internal sustainability goals, exemplified by its expanding Melbourne, Florida campus and customer offer.
In May 2022, Embraer revealed a deal with 4AIR through which customers enrolling in the Embraer Executive Care programme would receive 25 hours of complimentary carbon-neutral flight hours during their first year of ownership. The Phenoms and Praetors offer the best in fuel efficiency and this, combined with Embraer’s efforts to incentivise new customers into carbon offset, makes a clear statement – especially while development continues towards certificating all Embraer Executive Jets products to fly on 100% sustainable aviation fuel.