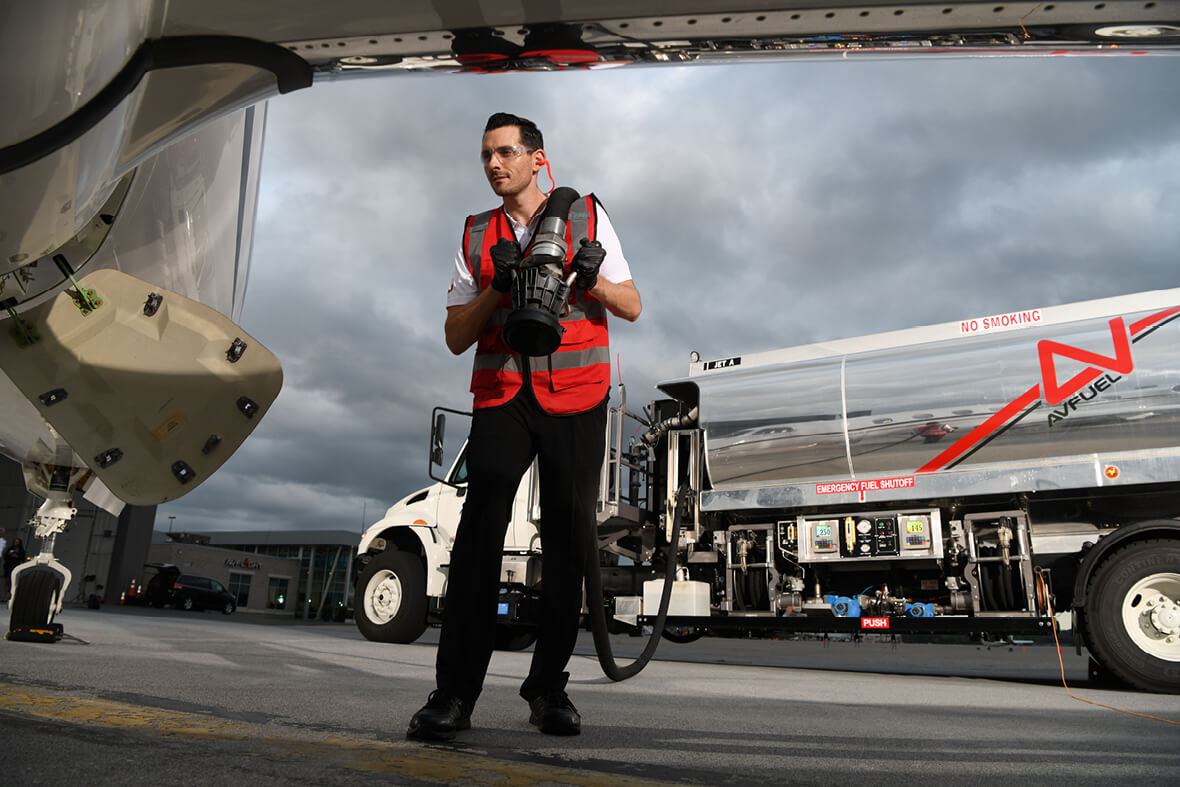 Serving the global aviation industry, Avfuel also claims to be the leading independent supplier in the US. Established as a supply and logistics company almost 50 years ago and transformed over the past 37 years under the ownership of president and CEO Craig Sincock, Avfuel’s network reaches in excess of 3,000 locations worldwide and more than 650 branded FBOs. Members of its executive team answered EVA’s questions.

Where does your fuel come from and how does it reach the customer?
Joel Hirst, Senior Vice President of Sales, says: “Avfuel has more than 100 relationships with refineries and oil companies. Our supply team manages these relationships and handles the logistics of transporting fuel from the refinery to the terminal or short-term storage facility, of which there are more than 275 in the Avfuel Network. This is done via pipeline, barge, rail or truck, depending on product type, origin and destination.
“Trucks then haul fuel from the storage terminals to their final destinations: airport and FBO fuel storage systems. Then refuelling trucks take the fuel from their storage systems over to an aircraft and pump fuel into the wing.
“The product undergoes meticulous quality control procedures at multiple touchpoints along its lifecycle. To further ensure fuel safety, Avfuel employs a team of fuel quality assurance experts, available 24/7/365 to answer and troubleshoot any fuel or refuelling equipment question or concern.
“The process is quite similar for jet fuel and avgas, but sustainable aviation fuel requires an extra step where the concentrated SAF product is blended with traditional petroleum-based jet fuel. Avfuel receives SAF already blended, from a terminal in northern California or Texas. From there, it is transported via road to an airport or FBO fuel storage system.”

There are many Avfuel-branded FBOs, yet your fuel is also available from some non-branded locations. How does this work?
Joel Hirst again: “We brand more than 650 FBOs globally and hold a 28% market share of branded FBOs in the US. These locations have Avfuel signage and benefit from a slew of front- and back-end solutions, including marketing and sales support, fuel safety training, streamlined payment processing, refuelling equipment backed by an in-house quality assurance team, risk management and aviation insurance, streamlined loyalty rewards, and Avfuel Contract Fuel.
“The Avfuel Network also includes more than 3,000 global Avfuel Contract Fuel locations. These airports and FBOs may or may not be branded but allow our flight department customers to purchase fuel from Avfuel at competitive rates through our contract fuel programme. They accept the Avfuel Pro Card, which saves operators and FBOs time and money. They are also advertised on our fuel finder and price listings.”

How do you encourage crews and others to seek out your fuel rather than a competitor’s?
Jon Boyle, Vice President Contract Fuel, says: “We do a great deal of direct outreach to fuel decision makers, like flight operators. This is done through a mixture of marketing and sales efforts, but the foundation is always building relationships. We love meeting with customers, talking with them on the phone, figuring out what they need and connecting them to the right solutions.
“We also have a number of touchpoints with flight operators, including weekly pricing, newsletters, online management resources, social media, advertising and more. All the while, we also promote Avfuel Network airports and FBOs, so the two go hand-in-hand.”

How widespread is your SAF distribution and what’s the story on pricing?
Marci Ammerman, Vice President of Marketing, responds: “Avfuel now has consistent supply of SAF at Ross Aviation (KTRM), ACI Jet (KSNA), Million Air Burbank (KBUR), Monterey Jet Center (KMRY), Del Monte Aviation (KMRY), Sonoma Jet Center (KSTS), Telluride Regional Airport (KTEX), Truckee Tahoe Airport District (KTRK) and Atlantic Aviation in Aspen (KASE), in addition to multiple limited-quantity deliveries to airports and FBOs, consistent-supply agreements with OEMs and special deliveries to corporate flight departments.”
Keith Sawyer, Manager of Alternative Fuels, adds: “The price of SAF is at a premium compared to traditional jet fuel, but we expect the differential to narrow as SAF supply increases to meet demand over the next five years. Today, that price is dependent on a number of factors, including, but not limited to the blend ratio of SAF to petroleum jet fuel, how far the SAF had to be trucked to its final destination, and what state-level credits are available for operators who use SAF.”

As we look toward the future, fuel companies must evolve, moving away from the products they have traditionally sold toward SAF, electricity, hydrogen and maybe other alternatives too. How will Avfuel adapt?
CR Sincock, II, Executive Vice President, says: “Avfuel is committed to investing in new technologies that move our industry forward. That’s why we created Avfuel Technology Initiatives Corporation. Founded in January 2012, the company’s mission is to further industry advancements, including bio and renewable fuels on several fronts, and no-lead avgas replacements, domestically and internationally.
“In addition to the development of these products, Avfuel Technology Initiatives Corporation thinks through the logistics of market introduction to help ensure any new product is sustainable, reliable, competitively priced, and fairly accessible. We don’t have a crystal ball, but we do have a dedicated team working with researchers on the latest technologies; just as we support and lead initiatives on SAF and unleaded avgas, you can be sure we’re keeping our finger on the pulse of further technological advancements, including electrification of flight, to better support the needs of our customers, our industry, our communities and our world.”