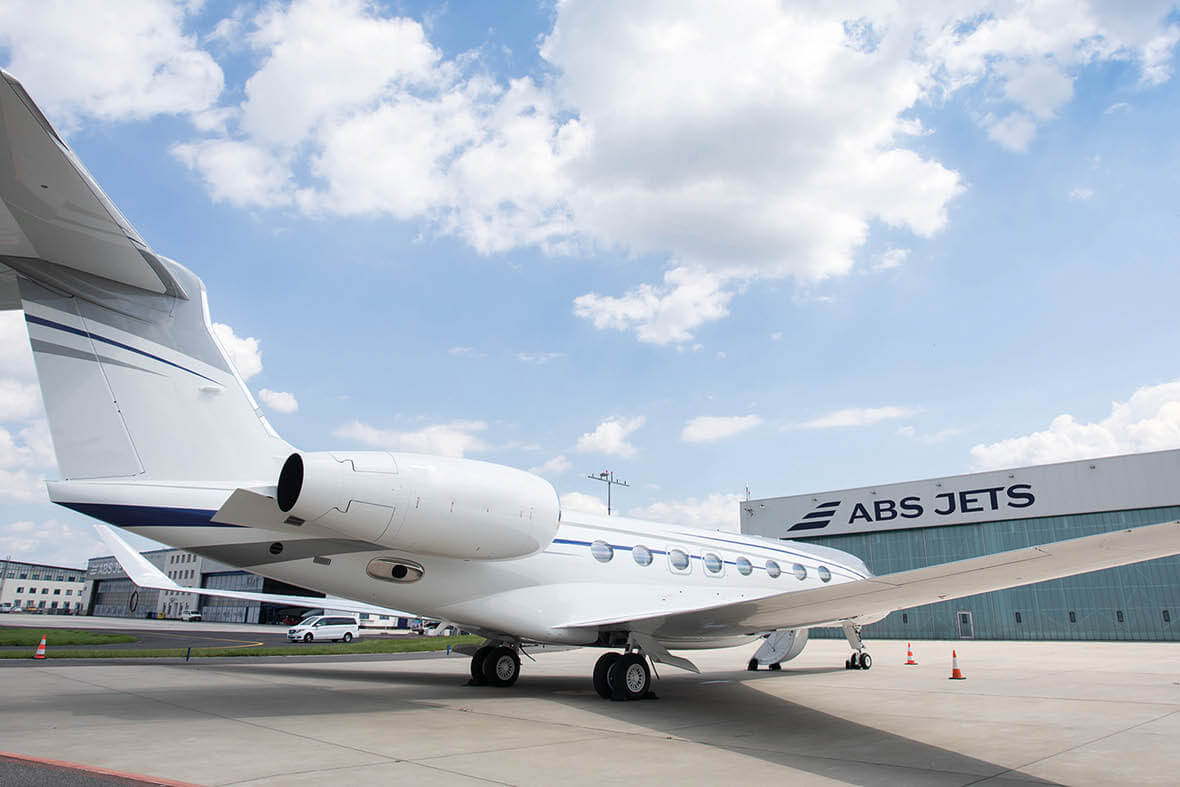 ABS Jets is realigning after losing many of its traditional clients to Europe’s difficult geopolitical situation, as Marketing Manager Petr Wessnitzer explains

People have been meeting to discuss aviation at Hendon, in North London, since the 1860s, after the area became popular for hot air ballooning. Heavier-than-air flying began around 1909 and from 1910, Hendon Aerodrome took a central role in the UK’s nascent aviation industry. Later a military airfield, it supported regular flying until 1957 and gliding until 1968. Today, Hendon is home to the London branch of the Royal Air Force Museum, presenting a world-class collection on a site awash with aviation heritage.
There could therefore be no better place to meet with aircraft enthusiast Petr Wessnitzer, ABS Jets’ Marketing Manager. He was in London on business and keen to talk about the company’s expanding capability, as well as its support for a new movie, Good Old Czechs, which uses archive footage to detail the exploits of two Czech pilots serving in the Royal Air Force during World War II.
ABS Jets is headquartered at Václav Havel Airport Prague in the Czech Republic, operating across the country and at airports in its neighbour, Slovakia. Our conversation inevitably begins with the war in Ukraine. “For us in the Czech Republic it is still quite far away,” Wessnitzer says, “but it is much closer for our colleagues in Slovakia, which shares a border with Ukraine. It has impacted business across the whole of Europe, most significantly in maintenance. We had maintenance customers from Russia and Ukraine and the war and sanctions mean that work can’t continue right now. We were very positive at the beginning of 2022, with plans for investment, but the war has changed the shape of that investment.”
Deprived of a main customer base, ABS Jets has looked to consolidate and expand in other markets. “We have clients in Africa, other European countries and from other, larger business aviation companies when they need extra capacity. They trust that our brand means quality and they are confident sending their customers to us. Our main focus now is on reorientating our maintenance business to markets without sanctions and to grow the type approvals we can offer in our Czech Republic maintenance centre.”
Wessnitzer freely admits that Central European companies need to work a little harder to demonstrate extra value since the region is perhaps not at the top of a western European business jet operator’s list when they are looking for an MRO. Perhaps that’s a result of residual Cold War thinking or simply from a lack of understanding, but he says visiting auditors and regulators frequently cite the ABS Jets operation as a role model for others, a fact he finds difficult to promote without it seeming like a boast.

Aviation heritage
The foundation for this excellence goes back more than a century. Other European nations may have a more obvious aviation history, but Czech aircraft production reaches back at least to 1918 and the Letov company, while Aero Vodochody was established in 1919 and still manufactures military aircraft and aerostructures today. Add to this the 100th anniversary of CSA Czech Airlines in 2023, and the air-mindedness of the population, and the quality not only of the ABS Jets’ product but also its people is assured. “All our employees are aviation lovers,” Wessnitzer confirms. “This isn’t just a job for them, it’s a passion. We are a community of aviation enthusiasts.”
Among them, two members of the Flight Dispatch and Flight Planning Department, or Operational Control Centre (OCC), recently qualified as FAA-licensed dispatchers. Jan Marx, Deputy Flight Planning Manager at ABS Jets, described the licensing process.
“I started in February, with access to distance learning – online lectures, exercises, lots of tests. Then I travelled to Cincinnati in June, for two highly complex entrance tests, each lasting almost three hours and containing questions as well as specific examples; all I was allowed to use was an ordinary calculator, pencil and paper. Next came a week-long, ten‑hours‑per-day course with additional ‘homework’. A further test and oral exam on the Friday preceded the final test with the FAA examiner on Saturday. It lasted six hours straight and included manually calculating a complex flight plan, something that might take a few minutes on the computer but which we must also be able to do by hand if the computer goes down.”
Extra training is also allowing ABS Jets to expand its maintenance offer to include additional Gulfstream models, while three newcomers to the managed fleet between autumn 2022 and the end of 2023 will include a Bombardier Challenger 605, for which more maintenance expertise will again be added. The company also operates aircraft from Dassault, Embraer and Airbus Helicopters.
“Our response to the crisis has been to look elsewhere for work, to add new capabilities and improve our offer. I don’t know if the work we traditionally had will ever come back,” Wessnitzer says, “but we are recreating ourselves as a European service centre in the centre of Europe.”

Brazilian connection
As if that wasn’t ambition enough and seemingly in contradiction to its Eurocentric plans, ABS Jets exhibited at the 2022 Latin American Business Aviation Convention and Exhibition in Brazil during August. Moving a team and their promotional materials halfway across the world required a major effort.
“We have a significant connection to the country, with lots of clients there,” Wessnitzer explains. “Our presence is such that we felt we had to be there, meeting with our customers. Our 24/7 OCC and charter offer means we are always available to them, and they use our flight planning service a lot; it has become even more important now that we have our FAA-licensed dispatchers.
“The connection between our flight planning department and Brazil goes back to the delivery of our first Embraer, when we worked directly with the company. Our Brazilian and wider Latin American clientele grew out of that, as did our status as an Embraer-authorised service centre, alongside those in France and the UK. We still provide flight planning for Embraer deliveries into the region.”
ABS Jets’ MRO capability extends from line maintenance through base maintenance including C-checks and the deepest level of overhaul. Trusted partners are available for paint and cabin refurbishment, but most Embraer customers come to ABS Jets for deep maintenance.

Future planning
Looking ahead, Wessnitzer sees ABS Jets successfully navigating the current geopolitical situation as it becomes stronger and reaches into new markets. “I’d like to see our maintenance offer established and respected among western European operators, and the ability of our charter operation to satisfy complex requirements recognised throughout Central Europe. Lots of charter providers expanded during the pandemic and we had specialised in large and ultra-long range aircraft, but the new Bombardier is midsize, allowing us to offer a wider variety of services and making us the dominant charter provider in the region.
“We won’t lose sight of our position in the aviation community either. We’re involved in several projects, partnering other organisations in promotional activities and events. The company currently has 250 people, so we are aligning that support with a strong business plan that may involve new hangar space in Prague and Bratislava, where we have waiting lists for aircraft accommodation.”

Good Old Czechs
Around 2,500 Czech airmen flew with the Royal Air Force during World War II, while others served alongside French and Polish comrades and elsewhere. ABS Jets worked with the British embassies in Prague and Bratislava, other UK organisations and experts supporting Good Old Czechs, the movie celebrating the service of Czech pilots František Fajtl and Filip Jánský. It also hosted a gathering of their families in one of its Václav Havel hangars, a structure dating from 1937.
Produced by NOW Productions and distributed by PILOT FILM to selected cinemas in 2022, Good Old Czechs will be available on TV channels in 2023 and can be previewed on YouTube, where a trailer is available. “We’re very proud to have supported the film. Even when we were repositioning the business in response to the latest war in Europe, we believed it was important to find the time and resources to support the community and celebrate our heritage,” Wessnitzer enthuses. “We want to be more than a successful aviation company. We want to be part of the region’s aviation community.”