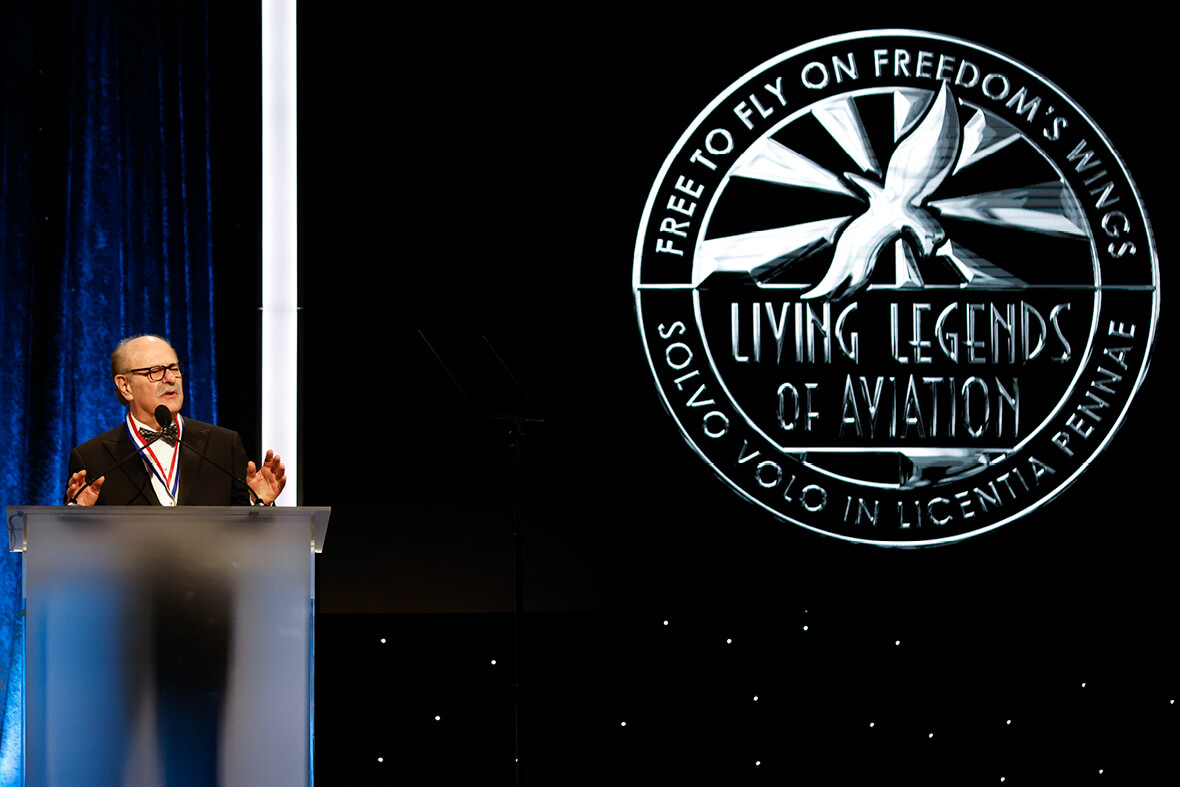 Avfuel president and CEO Craig Sincock has been honoured with the 2022 Kenn Ricci Lifetime Aviation Entrepreneur Award and inducted into the Living Legends of Aviation. In a very personal interview he reflects on the award and a lifetime in aviation

Avfuel owner, president and CEO, Craig Sincock received the 2022 Kenn Ricci Lifetime Aviation Entrepreneur Award at the 19th Annual Living Legends of Aviation Awards ceremony in Beverly Hills’ Beverly Hilton Hotel on 21 January 2022. He was also inducted into the Living Legends of Aviation, with actor and aviator John Travolta presiding as the Official Ambassador of Aviation. The lifetime award was the evening’s highest honour, but Sincock is characteristically modest in his acceptance.
“Of course I am incredibly honoured by this recognition. It is humbling to be counted among some of aviation’s greatest entrepreneurs and pilots. But it’s also about what’s behind the award. In particular, the people who have helped me over the years. They’re the ones who have made it all possible. I’ve been fortunate to be surrounded by amazing family, friends, colleagues and industry colleagues – really some of the best in the business. I wouldn’t be where I am today without them and this award belongs to them as much as it does to me.
“I wasn’t expecting it; you certainly don’t work day to day with recognition in mind. So when I learned about the award, I was really, truly touched and humbled. Same with the ceremony. I was in awe of the passion for aviation I saw in that room, being surrounded by some of aviation’s greatest minds. What made the evening truly memorable, though, was less the occasion and more those I spent it with. I was surrounded by some of my closest family and friends, including colleagues I’ve worked with for more than a quarter of a century. Having them there, feeling their support and celebrating with them, was truly special.”
A lifetime award feels appropriate for someone nearing the end of their career, perhaps just entering retirement but for Sincock, a total aviation person in every sense, that is not the case at all. “This lifetime award in no way signifies the ‘end’ of anything,” he confirms. “Aviation is a huge part of my life, of who I am. As is Avfuel. The aviation industry is ever-evolving and therefore so, too, is Avfuel. We have to adapt, change and grow. I’m proud of what we’ve accomplished so far, but the work is far from over. How exciting is that? I still feel enthusiastic when I think about what’s on the horizon for aviation and what Avfuel needs to be for its customers in 5, 10, 15, 20 years. That passion is still very much alive and it inspires me every day.”
Right now, Sincock is especially enthused with the next generation of aviation technology, including sustainable aviation fuel (SAF), no-lead avgas, electrification, advanced air mobility and vertical take-off and landing (VTOL). He says: “The Avfuel team works diligently every day to lead the mission in commercialising SAF, having formed partnerships with producers including Neste and Gevo. I truly believe SAF is going to become more and more significant as time goes on. To come up with a new fuel that’s sustainable and compatible with the existing infrastructure is incredibly meaningful. I’m also excited about the advancements in no-lead avgas – there is an immense focus on that initiative and I’m confident we will see multiple answers evolve in that arena.
“Then you have advanced air mobility and VTOL, and the electric powerplants that go with them – what a thrilling time this is to be involved in aviation! Soon we’re going to see a whole new generation of efficient, sustainable aircraft that operate differently than anything we’ve seen before. These new technologies will usher in the next generation of aviation. Our industry will look completely different, with aircraft featuring multi-propeller fan lift and the ability to fly from Point A to Point B without a runway.
“I’m as inspired now as I was as a young boy watching the moon landing and the Beatles walk off a Boeing 707 in New York. The possibilities are great and Avfuel will be here to support it all – even electrification. I say all the time: ‘We’re not in the business of selling fuel. Not really. We’re in the business of connecting people, businesses, governments and cultures.’ That’s what this industry is really about and that’s the service we strive to provide to our customers, no matter what their needs.”

Giving back
Complete aviation person though he is, Craig Sincock, along with his wife, Sue, is also passionate about giving back to the community through their combined philanthropic efforts. The Living Legends of Aviation Awards ceremony provided a neat snapshot into the industry’s true reach and effect. On the one hand, Hollywood superstar and pilot John Travolta was there, on the other, the Sincocks, who leverage Avfuel’s success to support a variety of initiatives.
Sincock explains: “Of course, we’re strong supporters of the industry, furthering several aviation causes, including medical-flight and aviation education institutions, veteran organisations, and scholarships for the next generation of aviators.
“But we also support health research initiatives. We established the Susan L Sincock and Craig R Sincock Scholar Fund, which supports University of Michigan researchers devoted to solving some of medicine’s most complex challenges. Together, we’ve sponsored more than 25 physician-scientists encompassing more than two dozen research projects in the last 11 years. These have included new discovery projects for prostate and pancreatic cancer, Alzheimer’s, leukaemia and lymphoma, and paediatric organ transplants through CS Mott’s Children’s Hospital.”
During almost 40 years in the aviation industry, Sincock has met many extraordinary people, now including John Travolta. “He’s been involved with the event for a number of years and was given the Official Ambassador of Aviation Award by the Living Legends of Aviation in the mid-2000s,” Sincock explains.
“The event was very well done. The emcees announced me as a new inductee, there was an introductory video, then I walked across the stage before John Travolta shook my hand and presented me with a medal as the official induction. From there, I had the opportunity to say a few words to the audience and take some photos with Travolta and the other Living Legends. He is certainly a true aviator, being an ATP-rated pilot and owning and flying a number of aircraft, including some rather large jets. I was with him for about an hour backstage and I have to say he is a very approachable, down-to-earth person.”

Personal inspiration
The fact that Craig Sincock was presented with the 2022 Kenn Ricci Lifetime Aviation Entrepreneur Award and inducted into the Living Legends of Aviation demonstrates how he is regarded by his peers. But what does the man himself consider to be his greatest achievement?
“Watching others succeed has been my greatest joy and point of pride across my career. Nothing inspires me more than the people I work with. I love mentoring others, watching them grow, and seeing their passion and determination flourish. We have some of the best people in aviation – I truly believe that. I can tell you first hand that great people attract great people. That’s how we grew Avfuel from a team of three to more than 1,000 globally. We attracted talent, and then mentored and nurtured that talent.”
Interestingly, global success has not prevented Avfuel from remaining a family business with true family values. Both Craig and Sue are pilots, so it should come as no surprise that the aviation bug passed on to the next generation. “My family is all about aviation,” Sincock agrees. “Our son, CR Sincock, II, plays an integral role in leading the family business as Avfuel’s executive vice president, and Avflight’s president and CEO. He grew up around the industry. In the early years of Avfuel, I’d travel with my family to just about every airport in the country. He was just a little guy, but we’d have a sport coat ready for him when we landed, and he’d go up and shake everyone’s hands. It brings me great joy to now call him my colleague and watch him lead the company.”