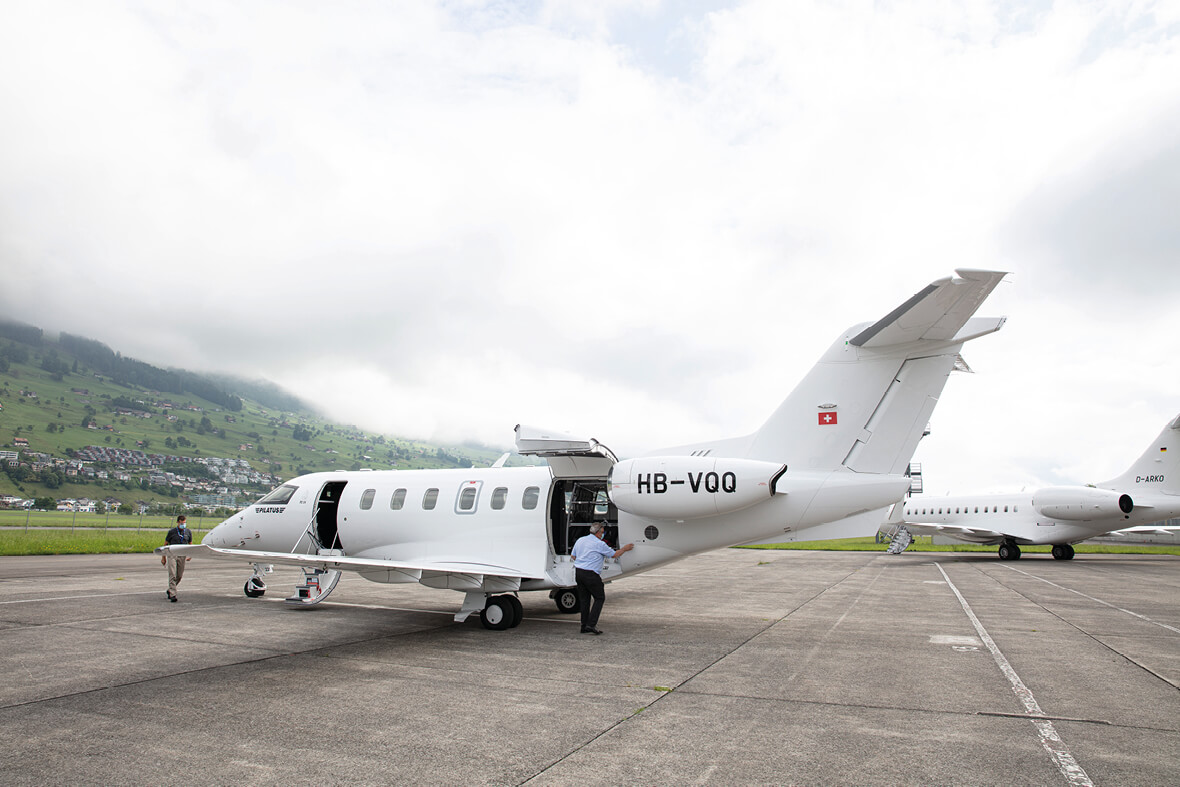 Your editor travelled to Farnborough to experience the PC-24, marketed by Pilatus as the ‘Super Versatile Jet’, only to find it both super and versatile

Cabin mock-ups are invariably beautiful, but without wings attached, the experience they provide is never quite the real deal. Which is why I was so keen to take up Oriens Aviation’s offer to view a Pilatus PC-24 demonstrator. I’d seen the cabin mock-up and here was the opportunity to see the jet realised, wings and all.

The arrangement was somewhat fluid. As the UK’s Pilatus Aircraft Authorised Centre, Oriens knew a demonstrator was coming to the UK from Switzerland, but changing COVID regulations and customer requirements meant the exact date and location for my visit were open to negotiation. After a couple of months of discussion while Oriens moved the various pieces of a jigsaw puzzle whose picture kept changing, 8 June firmed up as my viewing date.

At this point, the promise of getting up close to any aircraft again was exciting, but the PC-24 especially so. I know the PC-12 well, having experienced its unusual combination of fine finish and rugged versatility first hand, and the prospect of finding those same qualities in a jet was intriguing. Then, Oriens told me where I’d be meeting the jet and the day got even better.

I’d anticipated driving down to Oriens’ Biggin Hill base. It’s always a pleasure to visit the former RAF flying station, where the air is thick with history, but the PC-24 was going to be at Farnborough, a place where aviation dreams have, quite literally, come true.

Arriving at the airport terminal on a beautifully bright, blue-sky morning, I found the small, socially-distanced, freshly tested Oriens team ensconced with coffee and COVID-safe pastries in a large and very well ventilated room. The jet, they assured me, was outside and I could go out just as soon as the current viewing was complete.

A spotter at heart, I’d already taken a good look at the ramp, where the only PC-24 was most definitely not the Pilatus demonstrator. It stood all alone in the sunshine, resplendent in orange, almost too bright to bear.

With the emergence of a new coronavirus strain, changing travel requirements had meant the new Pilatus demonstrator could not be brought to the UK in time for the beginning of Oriens’ sales tour. The aircraft was fresh out of the factory and the British trip would have been its first engagement. But it was not to be, although it did touch down later that week in the Republic of Ireland.

Undaunted, Oriens chartered a German PC-24, operating under different COVID restrictions to those enforced by the Swiss authorities. Hence, the UK PC-24 tour began with the ‘Jaffa Jet’, an aircraft nonetheless equipped with a standard Pilatus cabin and essentially identical to the demonstrator in every detail but an addition to the luggage compartment, for AOC work, and that paint scheme.

Among the Oriens team there was a mix of obvious relief at having an aircraft to show off after all and disappointment that it wasn’t the factory-fresh bird from Switzerland. But I liked the Jaffa Jet, mostly because its interior had already seen some use; a pristine, brand new interior will always impress, but as an ownership proposition a cabin that’s seen some passenger traffic gives a better impression of how materials age and mechanicals last.

First Impressions
Stepping out to the aircraft, several things quickly become apparent. The main landing gear units are quite short and carry twin wheels with surprisingly large tyres. There is also a subtle yet fundamental difference between how the PC-24 looked compared to other jets of comparable size on Farnborough’s ramp. Almost without exception, the assembled aircraft were T-tailed, with their engines mounted either side of the rear fuselage, just like the PC-24. In basic configuration, therefore, it is similar.
The difference is in where the engines are positioned. Look carefully at just about any T-tailed twinjet and the engine nacelles are positioned so that their leading edges are close to or even overlap the wing trailing edge. On the PC-24 they are some way aft, creating additional design and engineering considerations that Pilatus took on with the aircraft’s versatility in mind. Setting the engines so far back enabled the design team to place a large, upward-hinged door in the port side of the rear fuselage.

The door’s low sill enables easy access to the luggage/cargo hold at the rear of the cabin, easy meaning that even your vertically challenged correspondent could comfortably reach inside from the ground. And, in a concept proven with the PC-12, it also enables straight-in loading via forklift truck, with the moderately swept wing trailing edge managing not to impede access. Pilatus hasn’t dubbed the PC-24 the ‘Super Versatile Jet’ for nothing.

Fantastic Lights
The PC-24 does not have winglets. Could Pilatus have forgotten this essential feature? Is it an option? No and no. It does have the tiniest upturn at the wing tip trailing edge, but otherwise there’s seemingly little provision for relieving induced drag. But then neither are there vortex generators nor fences. Staring down the wing from tip to fuselage it becomes clear why – the wing is incredibly, precisely complex in shape, Pilatus having engineered out the need for furniture to support its trademark rugged versatility.

Also noticeable by their absence are panels and any proliferation of fasteners, since the upper wing skin and underlying stringers are machined from individual aluminium billets for an incredibly smooth, lightweight and very strong result. Look underneath the wing and you’ll find a set of impressive flap hinge fairings, serving the PC-24’s truly huge flaps. Again, this is a versatile aircraft, designed for short-field operations from rough landing strips and the flaps are testament to that performance. Fully extended, they also prevent debris thrown up by the main wheels from reaching the engines. Given the large extent of the flaps, the ailerons are relatively small, but Pilatus has ensured effective roll control by activating the outer wing spoilers as required to supplement them.

The wing passes below the passenger cabin, its structure neatly smoothed into that of the fuselage under a deep fairing. The main landing gear is therefore short and this, combined with twin, low-pressure tyres and minimal exposed bay structure, is another nod towards the PC‑24’s real-world rough strip capability.

Walking forward towards the integral airstair, I noticed the wingtip light. A simple LED would have sufficed, but Pilatus has instead chosen an exquisitely crafted unit that might look just as good on an executive desk as it does on the ramp. Another equally impressive light, recessed ahead of the wing leading edge, sits adjacent to a panel covering a small hold for crew items, including the inevitable covers and remove-before-flight tags that would otherwise need to share space with the passenger bags stowed aft.
The PC-24 is truly an aircraft of design features and distractions. I’d driven three hours to see its cabin and hadn’t yet managed to set foot on the bottom step. Next, the nose landing gear, more specifically its tyre, caught my attention. At first glance it would be reasonable to assume that the PC-24’s nosewheel tyres have been poorly moulded, with a rim of rubber left around the edge. In fact, the apparently extraneous material is carefully designed to deflect water and debris away from the fuselage underside. An optional lightweight composite ‘mudguard’, known as the Gravel Kit, offers further protection, while the inside of the undercarriage bay is essentially smooth, with nothing for thrown debris to damage.

Light Touch
And so, finally, to the cabin. Anyone familiar with light jets will be impressed by the size of the PC-24’s cabin, which suggests it ought to reside in a class above. The combination of light coloured materials and dark veneer highlights added to the feeling of airy spaciousness, while the reclined 6ft 5in frame of Oriens’ CEO Edwin Brenninkmeyer proved the space was no illusion. And not only does the roominess hint at a class above, but the cabin finish is exemplary, especially considering this was not a pampered demonstrator but a working aircraft.

The floor is flat and the seats comfortable, with multiple adjustment, as one might expect. They also entertain, which is perhaps less expected. The leather feels good, the retractable armrest action is endlessly fun to operate and the mixed materials used in the seatbelt buckle are a haptic delight.

Best of all though, at least to my mind, the cabin Wi-Fi enables passengers to control cabin temperature and lighting via their personal devices, with no need for an app. I entered the IP address into my old iPhone and immediately had access to the aircraft’s IFE server and cabin controls. The server may be loaded with content as the user desires, but for my short stay, switching the lights on and off by tapping the screen, then adjusting their brightness instantaneously with the on-screen slider was entertainment enough.

Upfront, Paul Mulcahy, former Pilatus test pilot and now Director of Flight Operations at Oriens, was sitting in the PC-24’s impressive cockpit. For once I managed to reach the left-hand seat without cracking my head or standing on anything important. I understood almost all of his tour of the expansive Honeywell Primus Epic 2.0 avionics suite forming the Pilatus Advanced Cockpit Environment (ACE), perhaps most importantly that it has much in common with that of the PC-12NGX, facilitating mixed fleet operations and rendering the turboprop an excellent stepping stone to the jet.
Mulcahy was intimately involved in the PC-24 test programme and therefore best placed to offer thoughts on its performance. Again, the aircraft’s size misleads. He says that thanks to its aerodynamic configuration, the PC-24 flies like a big jet, providing an extremely smooth, comfortable ride. He likens the piloting experience to that of the Boeing 757, but combined with rough field capability and the possibility of a more sporting approach to passenger comfort should the situation demand it.

With consideration to operating the jet away from hard runways, Mulcahy explained that initial testing on unpaved surfaces, including gravel, dirt and dry grass was extremely successful and noted that unpaved surface characteristics were broadly similar to their paved counterparts. Later in the programme, when asked to ‘look’ at wet grass he admits to some initial scepticism and, indeed, reticence. Nonetheless, taking a step-by-step approach, the trials commenced as the aircraft continued to evolve, with the result that its control systems prevent any deviation from straight ahead, no matter how wet the landing roll. Mulcahy says the aircraft is enjoyable to fly, generously equipped and, above all, safe, but reckons there’s more capability to come and hints that Pilatus is continuing its evolution.

The object of the day was to experience a proper PC-24, wings and all. The experience proved that the cabin was beautifully finished and finely executed, although I’d expected that. I hadn’t anticipated interacting with the cabin lights though, and the space was a big surprise, but the major take-away from the PC-24 is one of a carefully crafted precision product.

It looks as good as any other light – or medium – jet on the ramp, and better than some. But it really will operate off grass, or gravel. And it’ll take a pallet, loaded by forklift. The PC-24, Pilatus’ first jet and first twin-engined design is, by any measure, both super and versatile.