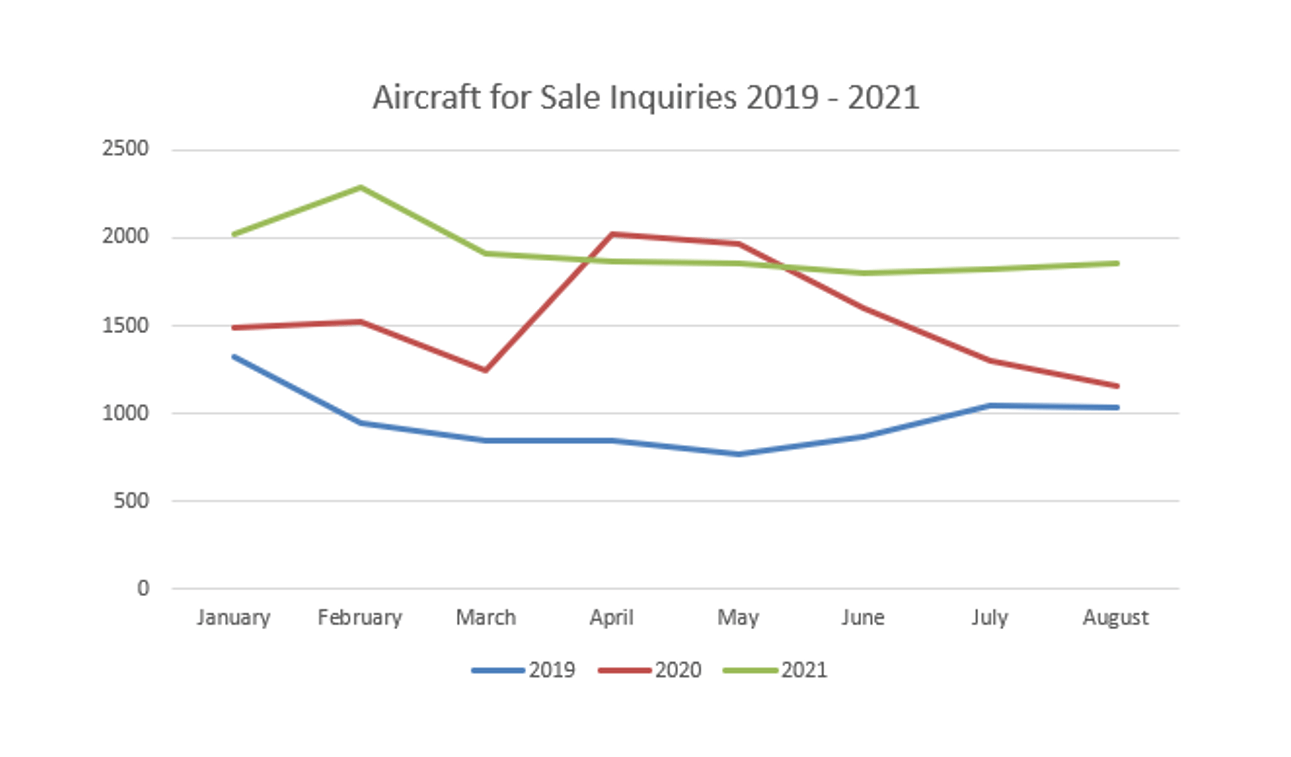 The COVID-19 pandemic has kept a strong grasp on the industry, but this grip is slowly loosening.

GlobalAir.com, a website for private aircraft transportation resale, continues to see a steady increase in its aircraft for sale inquiries despite preowned aircraft inventory hitting a record low across the industry.

It remains a seller’s market, with aircraft often receiving offers within days of being listed on GlobalAir.com.

Colibri Aircraft analyzed the preowned private jet inventory in July of 2021, highlighting a decrease of 38% since June 2020. Only around 4.65% of the preowned jet fleet is listed for sale, the lowest level since records began in the 1980s.

The United States reopened quicker than many other countries, which drove the drop in private jet supply as the desire to travel increased.

The Gulfstream G550 ranks as the aircraft to receive the most inquiries in 2021 on GlobalAir.com.

The ultra-long-range jet was retired from production in 2021.. The Hawker 800XP and Bombardier Global 6000 took the second and third rankings respectively. But the real gains have developed for the small to medium range jet aircraft.

Jeffrey Carrithers, CEO of GlobalAir.com describes the market as seeing an incredible growth of new first-time buyers whose companies have done well the past year and are being offered huge tax incentives.

Long-time flight departments are holding on to aircraft they would normally be cycling out because of concerns with locating replacement aircraft.

This, of course, is driving price levels above normal values, in some cases, aircraft are being offered 20% over the asking price in bidding wars.

In the aircraft resale industry, this is the perfect storm. This perfect storm however is beginning to have adverse effects.

“Though we are seeing an enormous amount of transactions being completed, the industry has developed a vacuum of less and less inventory,” said Carrithers.

“What we are seeing in the North American market alone is less than 3% of good late models (2000 and above) that are available. Approximately 250 aircraft are on the open market compared to 2,000 in normal years.”

Jeremy Cox of JetValues Jeremy, a well known appraiser in the aviation industry, confirmed our findings and comments: “By far, one of the most contested used aircraft markets is the Citation XLS. Currently there is only 1% of the active fleet world wide actively advertised for sale…that’s 4 aircraft out of 324.”

This low number will also begin to affect employment numbers in the resale industry negatively.

There are many aircraft brokers and brokerage firms with support staff but fewer aircraft have been brought to the market. Something will have to give as many are currently relying on a “Rainy Day” fund.

August was a somewhat slower month for aircraft being removed from GlobalAir.com’s market, with this month typically yielding slower interest, but the number of inquires still increased.

If the economy continues to grow, the federal government preserves the low interest rates and they do not end the tax incentives, we have no reason to believe there will be a slow down until January of 2022.