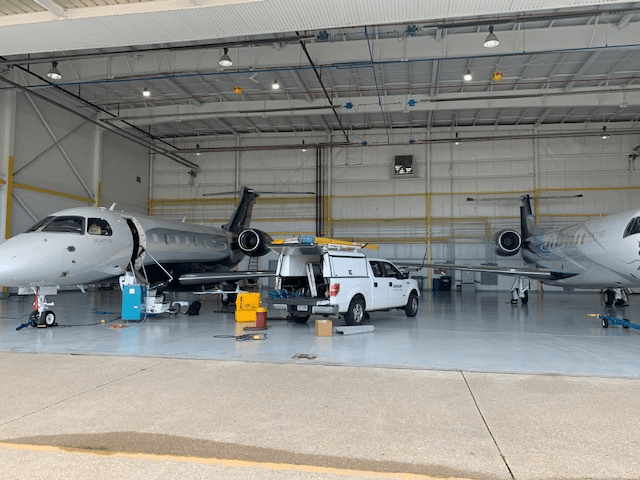 In mid-July, Duncan Aviation’s Rapid Response Team (RRT) received a call from a customer with an Embraer Legacy 500, asking if the team could head to Omaha, Nebraska, to help with two issues that had left the aircraft in an AOG condition. The initial faults were a “PBIT Time Expired CAS” message and a “FLT CTRL NO DISPATCH CAS” message.

“We don’t see many faults with Embraer Legacy 500s, so I look at these as opportunities to learn something, as well as a way to be there for our customers,” says Kluthe.

The Duncan Aviation techs were able to isolate and fix the faults in a matter of hours. In the meantime, the aircraft also had an “ENG FAIL” and an “ENG SHORT TERM DISPATCH” CAS message. Engine Line Lead Tech Rustin McCullough and Airframe Tech Rep Frank Logsdon joined the team in Omaha and identified the faulty component as RH Engine Electronic Control Unit (ECU) Channel B. The team performed the necessary engine runs and returned the aircraft to service.

Spurling says calls AOG calls are not unusual. Although flights have fallen off a bit because of the pandemic, in the last week, the Rapid Response Team out of Lincoln has responded to calls for help from operators of six aircraft that were AOG. The team in Battle Creek, Michigan, responded to one, and the team in Provo, Utah, responded to three calls.

“The week before we helped this Embraer customer, our RRT teams from our three main facilities in Battle Creek, Lincoln, and Provo, had traveled 6,612 miles to help customers with their AOG aircraft,” says Spurling.