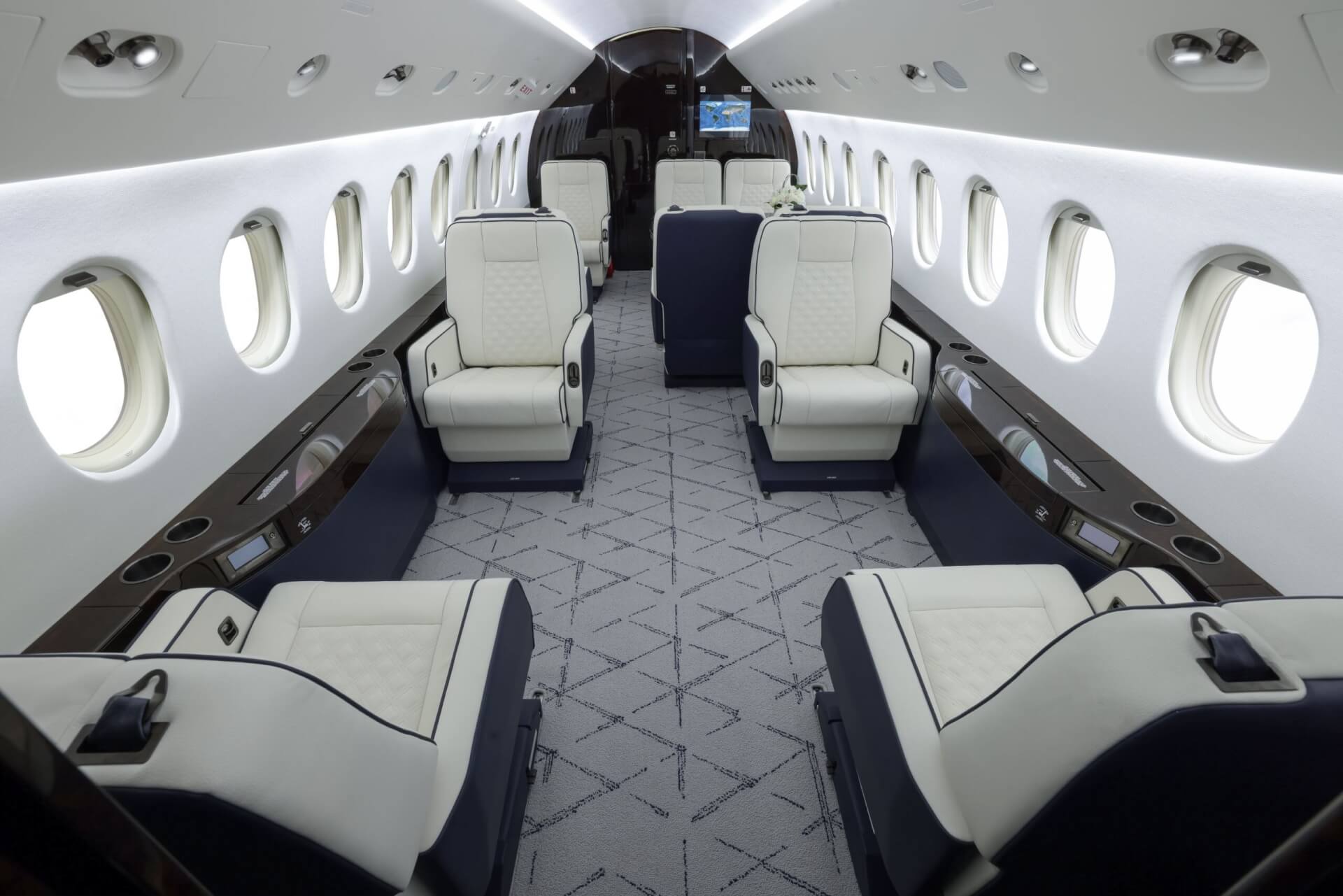 Duncan Aviation Paint & Interior Sales Rep Adam Beach said that the owner purchased the aircraft and brought it straight to Duncan Aviation for a complete transformation.

“The owner was mainly looking to modernize the overall look of the interior,” said Beach.

“We performed a Duncan Aviation PSU Mod, which took the old-style Falcon PSU and gave it a modern style.”

The Captain/Director of Maintenance said that the Duncan Aviation Design team worked closely with the aircraft owner who had very specific interior requirements.

“They took the time to really understand his design vision, and made it a reality,” he said.

“The resulting aircraft interior has created a very satisfied owner and garnered a lot of positive comments from the passengers who have experienced it.

“As a Captain/Director of Maintenance, I appreciated the Duncan Aviation team effort to keep the project transparent, communicate effectively and promptly, and proactively solve any issues that arose.

“From my perspective, communication and capability are the primary reason I choose Duncan Aviation as our go-to MRO, and will continue to do so.”

Duncan Aviation Senior Lead Designer Stephanie Kuhn said that the owner was insightful about the details and overall look and feel of the interior.

“3D illustrations were created to ensure that our interpretation of his vision was fully understood and executed properly,” said Kuhn.

“His attention to detail early in the design process set the stage for a successful completion of the interior that turned out stunningly beautiful.”

The owner wanted to incorporate details into the aircraft cabin that he was familiar with in his vehicle along with other details that caught his eye in other spaces he frequented.

“He had in a sense created a “wish board” of ideas that all helped communicate his expectations for his aircraft.

“We were able to reproduce many of the same patterns and apply them to the interior of the aircraft,” said Kuhn.

“The final look of the interior is amazing with an overall lightness of the sidewalls, seats and floor, contrasting with rich navy blue accents in the seats and carpet that make a bold statement.”

Beach adds that the Duncan Aviation team went above and beyond to ensure an on-time delivery.

“Project Manager Tammie Burns did a great job keeping this project on track and sticking to a timeline to ensure the aircraft delivered on-time,” said Beach.

“Lead Designers Mary Lee and Stephanie Kuhn were spot on with the design and produced a one-of-a-kind final product.”

In an effort to accommodate the owner’s busy schedule, Upholstery Team Leader Mark Grant met up with the client at his office to perform a seat check to ensure his expectation for comfort and quality were being met.

To do this the Duncan Aviation team came up with a plan to send Interior Shift Supervisor Ben Lee on the flight from Lincoln, Nebraska, to Provo, Utah, where the aircraft would then be delivered to the owner.

“Once the aircraft arrived in Provo, we had a team of folks standing by ready to fix any items that came up during the flight,” said Beach.

“We then hand-delivered the aircraft to the owner in California, which provided us the opportunity to explain step-by-step what we did to the aircraft and answer any questions he had.”