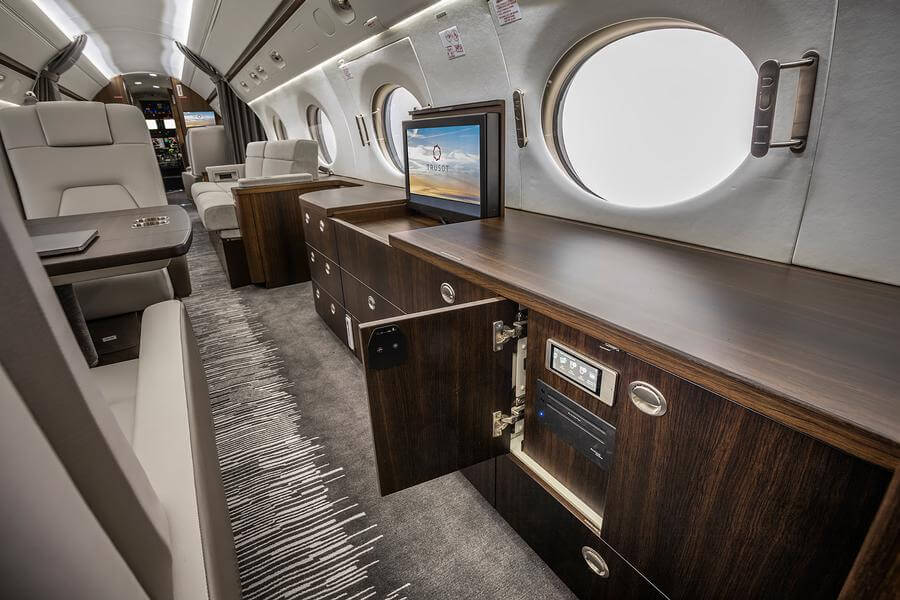 “I just love helping make this customer’s vision come alive,” says lead designer Emily Krawczak. “I’ve had the good fortune to work on all four of the aircraft, and although each has touches that let you know they’re part of the same fleet, they also have unique features that give each plane a slightly different personality.”

The G550 is the customer’s go-to aircraft for travel from Mexico to northern Africa to Spain and back, so the aircraft was given a complete overhaul, including the installation of an Aviation Clean Air (ACA) ionizer system.

“Our customer absolutely wants continuous protection from harmful, airborne pathogens, especially as he travels all over the world,” says Senior Avionics sales rep Justin Vena. “We also completely customized the Collins Venue Cabin Management System and its monitors and switches.”

One of the more interesting modifications that captivated the team and customer alike was the way the Venue touch-screen switches were mounted.

“Completions and Modifications Sales Rep Adam Bruce and I worked with our engineers and Cabinet Shop team to create a bump-out feature that mounts the switches at a 45-degree angle instead of flush with the drinkrails,” says Vena. “I saw a picture of a mythical aircraft, showed it to the team, and they created it. It’s one of the customer’s favorite features!”

Throughout the cabin, there’s very little Duncan Aviation technicians didn’t touch. The cabin was reconfigured so the forward four seats were set aside as the crew rest seats.

“It makes a lot of sense when you think about it,” says Krawczak. “The crew uses the forward lav and now their rest area is right there, too, so they don’t have to walk the length of the plane and through the cabin to reach the aft lav.”

Because the owner’s family is frequently aboard the G550, the owner’s wife took an active role in the material choices and focused on the overall appearance of the interior, especially the veneer.

“We put new veneer and countertops in the galley, and as the floor in the galley is a high-traffic area, we went with vinyl,” says Krawczak. “We also moved a curtain forward to close off the cabin, and the customer opted for a luxurious-looking material that provided additional sound-proofing.”