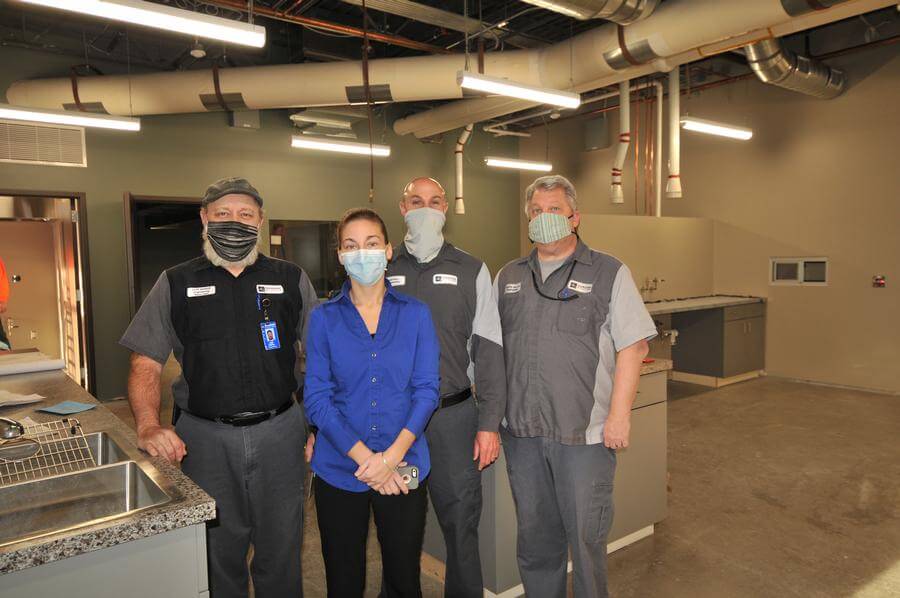 When construction is complete, Team Leader Cliff Barker and Flammability Technicians Travis Wilcox and Ryan Ball will move the test equipment from the old space to the new, set it up, calibrate it, and test it to make sure it works properly. The team will move and set up one test chamber at a time so Duncan Aviation’s flammability testing capabilities will continue during the move.

“Currently, we have two vertical test units and a multi-use test unit for horizontal, 45-degree and wire testing,” says Barker. “After those have been installed and are fully functional, we’ll install the new Sonic Burner (Fire-Block) test equipment and begin conducting those tests as well.”

The Flammability Lab team will conduct calibration and R&D tests to make the necessary adjustments on the Sonic Burner for several weeks. When they’re finished, Duncan Aviation’s Organization Designation Authorization’s (ODA’s) Engineer Structures-Flammability unit members (Barker and Wilcox) will submit an application to the FAA seeking the authority to issue approvals on FAR 25.853 (b) Fireblock Testing.

FAR 25.853 (b) Fireblock Testing was mandated by the FAA in the mid-1980s for aircraft flying under Part 25, and it was amended in 1995 for all aircraft operating under Part 135; however, the former Oil Burner seat-cushion test did not apply to many of Duncan Aviation’s customers at the time. Now, as more owner/operators are flying aircraft that must meet and maintain the Amendment 25-59 requirements, or they opt to operate under Part 135 rules, testing has become an additional safety feature. Duncan Aviation’s ability to provide in-house testing will minimize the turntime and ensure we meet the customers’ schedules.

Barker has an A&P certificate, an Inspection Authorization (IA) certificate and an FAA-ODA certificate for Engineering Structures/Flammability and Manufacturing Inspection and Conformity. He was instrumental in the development of the Duncan Aviation Flammability Lab in 1995.