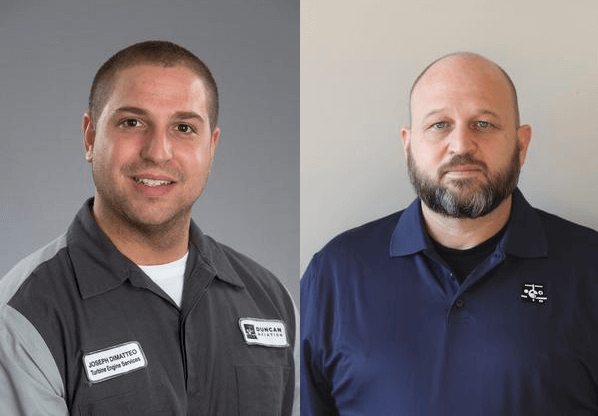 Operators in the southeast Atlantic region now have more convenient access to Duncan Aviation services like engine AOG and most scheduled and unscheduled events, including engine changes.

“There is a large presence of business aircraft in this area,” says Andrew Arcuri, East Coast RRT Assistant Manager.

“Having access to a qualified technician in the region allows operators to minimize unplanned downtime and expenses with onsite AOG support within hours.”

The Duncan Aviation RRT has provided mobile engine services to Charlotte and the surrounding area by sending teams from its dispatch locations in Atlanta, Ga., and other areas in the Northeast region.

DiMatteo’s aviation career began in 2013 when he earned his A&P from the National Aviation Academy in Clearwater, Fla. He has hands-on experience with several engine platforms, including Honeywell (AS907/TFE731), Rolls Royce, Pratt & Whitney, and Williams.

In 2016, DiMatteo joined Duncan Aviation on the engine line in Lincoln, Nebraska. Within two years, he was a lead tech on the team and training new technicians.

“It is exciting to have this opportunity of enhancing Duncan Aviation’s brand and building the Rapid Response business in this area,” he says.

“I have been knocking on doors, introducing myself. I want them to know what I can do for them. I want to be their local resource for technical questions and engine Rapid Response needs.”

Holcomb comes to Duncan Aviation with 23 years of aviation experience working on F18 Hornets while serving in the U.S. Marine Corps and Air National Guard.

After seven years in the auto industry working on BMWs, he returned to aviation as a turbine engine technician and quality inspector on Honeywell HTF (AS907) engines.

Before joining Duncan Aviation, he worked directly with operators as a customer project manager, coordinating the necessary logistics for each event.