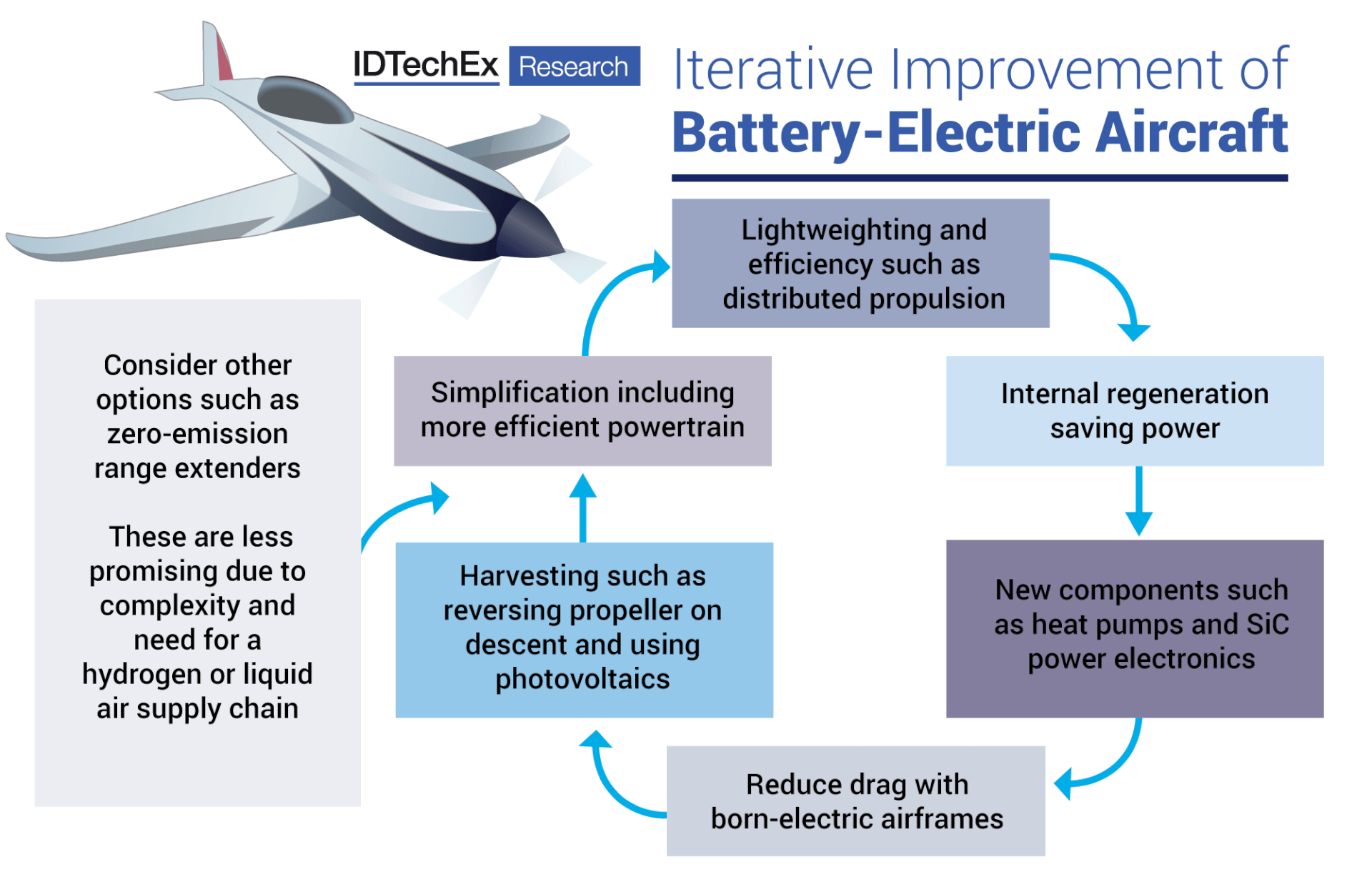 Bye Aerospace does not even make conventional aircraft. With its Tesla-style approach, its order book exceeds 720 battery-electric aircraft evenly split between two and four-seaters.

As the IDTechEx report, “Manned Electric Aircraft: Smart City and Regional 2021-2041” points out, this has caught Cessna, Cirrus and Piper by surprise.

Particularly so because the purchasers are not people easily bamboozled – they are mainly pilot training and air taxi businesses that collapse if they get it wrong.

Primarily they buy because it saves them money. Brand enhancement and saving the planet are useful bonuses.

Attention now turns to two-propeller fixed-wing aircraft up to 10 passengers for business and regional use similarly beating the traditional cost of ownership, with the zero emissions and faster climb typical of battery electric.

Noticing this, Textron, owner of Beechcraft which is under threat, has belatedly said it will look into electric.

It is not too late because approaches to these larger versions have been questioned by both battery experts and aeronautical engineers.

There is no simple scalability. They need disproportionately more power and any new aerodynamics, where proposed, has issues.

For instance, the battery team at IDTechEx caution that solid-state lithium batteries of the necessary size and energy density are unlikely to be rolled out by 2026 but several putative makers of regional aircraft promise otherwise.

Bye announced a partnership with Oxis Energy enabling such an aircraft in 2026, only to see the company go under shortly afterward.

Yes, LG Chem talks of a similar date for such lithium-sulfur batteries with high energy density but IDTechEx advises that 2030 is probably the earliest for full deployment.

Believe that only if several issues are overcome such as cycle life and toxic emissions on misuse or wrongful disposal.

Other aircraft developers such as Aura Aero and Regent talk darkly of their access to a battery with much-improved energy density but investors would be well advised to check out exactly what they mean and verify that technology’s roadmap with battery experts such as IDTechEx. See IDTechEx report, “Solid-State and Polymer Batteries 2021-2031: Technology, Patents, Forecasts, Players” for more.

Usually, the aerodynamics and construction of these larger battery-electric aircraft are required to go faster, but 50% faster means three times the battery. The acceptable range may be 500 nautical miles and conventional design may be inadequate for this. Cars put in double the battery to get more range but that is less effective with aircraft.

The primary focus should be on reducing the 250kW or so needed in cruise. The Flying Ship Company, Regent, and RDC Aqualines will use ground effect to greatly reduce drag but that limits them to flying low over the sea.

Heart Aerospace finds that low speed and short-range are acceptable in Scandinavia so it sharply reduces the battery requirement with 216nm range 215 knots.

With a conventional airframe, the conventional lithium-ion batteries are one-third of the weight. The batteries will probably need to be changed fairly often and shorter-range in cold or rough weather will need to be acceptable.

Probably the most trustworthy, beneficial improvement to aerodynamics, beyond born-electric sleek designs, is to intimately integrate propulsion with thrust using propellers along the wing. That can include large ones at the wing tip reducing vortice drag.

Enjoy at least a 10% increase in range partly from a much smaller wing volume. NASA, the German Aerospace Institute DLR, and others are behind this. Regent and to some extent Aura Aero are going this way.

Better sourcing of electricity is also necessary. Airbus is going earlier to 1000nm range by the inelegant approach of huge bulges to carry hydrogen that drives notoriously inefficient fuel cells.

They still need quite large batteries. However, the idea of battery aircraft of this size should not be abandoned. Rolls Royce, working with Tecnam and Widerøe, plans an 11 seat one for 2026 plying the short distances acceptable in Scandinavia.

The Tesla approach to cars of many small improvements in powertrain efficiency, lightweighting, and simplification has lessons here.

For example, a regional aircraft can have 500km of cabling but in cars, at least 50% of cable weight is eliminated by higher voltage, improved geometry, and board-to-board wireless connection.

In-mold electronics, structural batteries, and large aluminum die castings together eliminate at least 1000 parts. However, although solar upper-atmosphere drones will be up for 5 years on sunshine alone and China even has a “Meiying” drone flying 24/7 at only a few thousand meters on solar alone, the necessary 3-5 multijunction solar bodywork all over a business/ regional aircraft would cost $100,000 at present and only contribute 5-10kW. It will be affordable and make sense for up-market single-propeller aircraft around 2031.

For the larger aircraft, better opportunities can be taken from cars as detailed in the IDTechEx report, “Routes to 1000 Mile Electric Cars 2021-2041”.