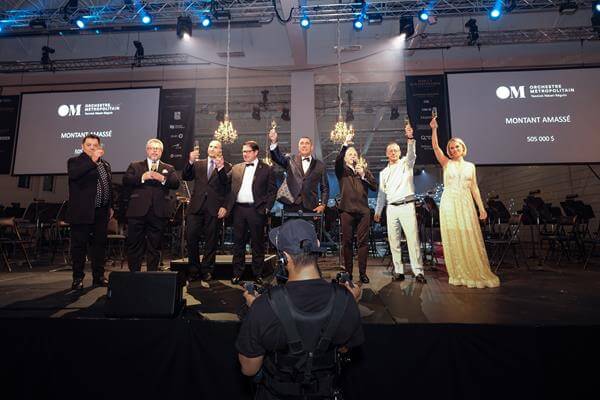 The Orchestre Métropolitain and Bombardier, two major Quebec institutions firmly rooted in their community, came together this evening for the Sixth Annual OM Benefit Gala, presented this year around the theme “Great conductor, great chef”.

The gala took place in a spectacular setting, at the Laurent Beaudoin Completion Centre in Dorval where the interior fittings of Global business jets are designed, manufactured, and installed, against the backdrop of a superb Global 7500 aircraft, the world’s largest and longest-range business jet that has redefined business aviation.

Presented by TD Bank Group, the event took place under the honorary chairmanship of ÉRIC MARTEL, President and CEO, Bombardier, in the presence of YANNICK NÉZET-SÉGUIN, Principal Conductor and Artistic Director, Orchestre Métropolitain, and Quebec culinary chef MARIE-FLEUR ST-PIERRE, Head chef at both Tapeo, the renowned tapas restaurant, and Mesón, a restaurant she co-owns.

The role of Master of ceremony has been entrusted to ÈVE LAURIER, Vice President, Communications, Marketing and Public Affairs, at Bombardier, who masterfully led the most important charity event for OM.

This memorable evening began with the traditional welcome cocktail, followed by a private concert with the Orchestre Métropolitain, conducted by Yannick Nézet-Séguin, a discussion with Éric Martel and Yannick Nézet-Séguin, on the themes of leadership and family, and a silent auction, all accompanied by a gourmet experience with Marie-Fleur St-Pierre.

This positive and unifying event brought together great influential Quebec personalities who came to celebrate and support the OM’s mission and Quebec’s cultural reputation around the world.

Donations for the Future of Music
The evening’s donations will help support and enhance the OM’s musical mission by letting it continue to serve its community by sharing symphonic music with a growing audience, and by making culture more accessible to families, young musicians, children, and the elderly, with whom the OM works closely.

“As Honorary Chair, I would like to personally thank all those who responded this evening and have contributed with their donations and their time to the success of this very important event. It was a very proud moment for all of us at Bombardier to welcome you to our premises.” Éric Martel

Distinguished guests who took part in the event included Pauline Marois, former Premier of Québec, Valerie Plante, Mayor of Montréal, Simon Brault, Director and CEO of the Canada Council for the Arts, Louise Sicuro, Founder of Culture pour tous and Journées de la culture, Ben Marc Diendéré, Chair of the Conseil des arts de Montréal, Nathalie Maillé, Executive Director of the Conseil des arts de Montréal, Michel Leblanc, President and CEO of the Chamber of Commerce of Metropolitan Montreal, and Laurent Beaudoin, who led Bombardier from 1966 to 2003 and who wished to be present at this memorable evening to also mark Bombardier’s 80th anniversary.

Legacy of a Great Entrepreneur
It would have been impossible for Yannick Nézet-Séguin not to mention the incredible contribution of Mr. Beaudoin, who was first CEO and then Chairman of the Board of Bombardier from 1966 to 2015. His entrepreneurial spirit and innovative vision transformed Bombardier from its modest beginnings as a snowmobile manufacturer to a global giant that proudly shines the torch of Quebec ingenuity around the world.

“Because you led this flagship company, Bombardier, like a true maestro, Quebec and the entire world will always remember your leadership, your great career, and respect the immense legacy you have left behind for the people of Quebec. You led Bombardier like a great conductor. Therefore, it is an honor for me to present to you my baton that I have signed.”  Yannick Nézet-Séguin