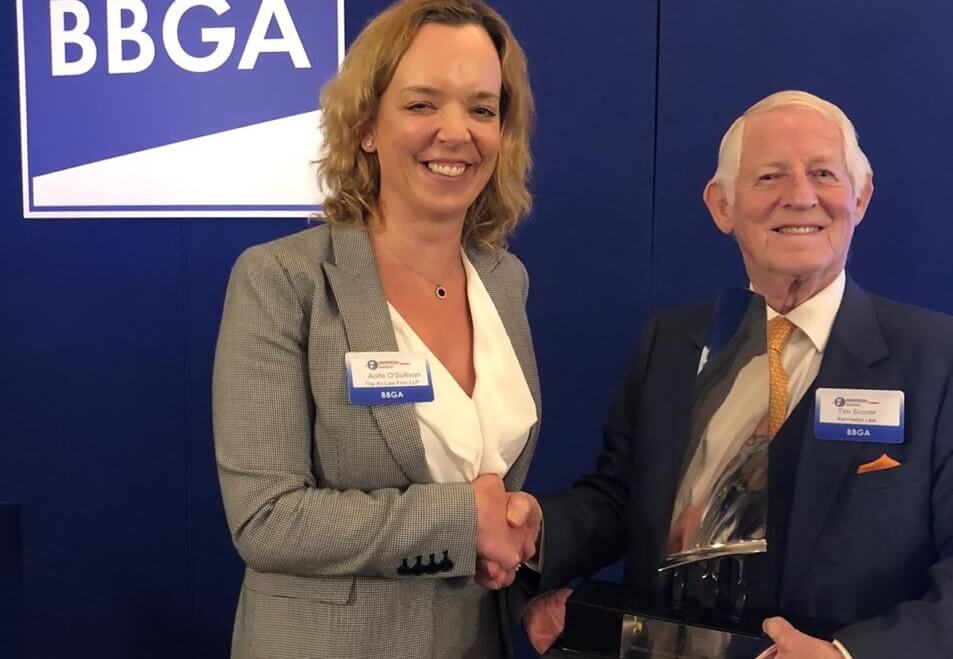 Aoife thanked Tim Scorer for the excellent contribution he has given to the aviation industry over the decades, supporting OEMs, airlines, private flyers and the BBGA itself.

Born in Buxton, Derbyshire, Tim has successfully combined a long, legal career with his love of aviation and enjoyment of flying as a private pilot.  He earned his PPL aged 30, at his local airfield in Ipswich.   He trained on a vintage Auster aircraft and ended up owning several other, more modern aircraft.

Having qualified as a solicitor in 1965, and gained his licence, he carried out a number of assignments for the UK CAA during the 1970’s. One high profile case involved a female Irish wolfhound breeder in Norfolk.  Angry at the regular aerial crop spraying flights over the fields surrounding her encampment, she seized her 4:10 gun and started firing.  Tim assisted the CAA in prosecuting her for endangering both pilot and aircraft in a story the tabloid newspapers headlined ‘Annie got her gun.’

Through the 70’s Tim was involved with public relations for solicitors, at a time when they weren’t allowed to hand out business cards, but could be supported by their local law society. That led to a two-year stint helping the Law Society improve the public perception of solicitors. His break into aviation law came when he joined City firm, Barlow Lyde and Gilbert, in its aviation department.  After 12 years as a partner, he took up partnerships in the aviation teams of other aviation firms, becoming a Consultant at Kennedys six years ago, focusing on private client work for organisations and litigation claims for pilots.

Over the decades, Tim has been involved in the aftermath of a number of high-profile aviation disasters, including Lockerbie in 1988.  Clients he represented included BAE, British Airports Authority and the CAA, plus several international airlines.

For many years Tim has been a Liveryman of the Honourable Company of Air Pilots, and a Member of the Royal Aeronautical Society.

These past few years Tim has focused on general aviation and leisure aircraft, playing a pro-active role at BBGA as board member and legal advisor.  He played a key role in the reconstitution of the association, revising the Articles of Association, and aligning them with its independently commissioned Visions and Values initiative.

Tim has a current PPL, but is conscious of the limitations of his years, and says he is considering “quitting while I am still ahead”.   His local airfield is Earls Colne, 10 miles west of Colchester.   Much of the concrete used to construct this WW2 US airfield was dug up and ultimately formed the foundations of the M11 Motorway. Tim is pleased his airfield, home to the Essex and Herts Air Ambulance, is not under threat.   It has an active flight training centre, a golf course, and a hotel.