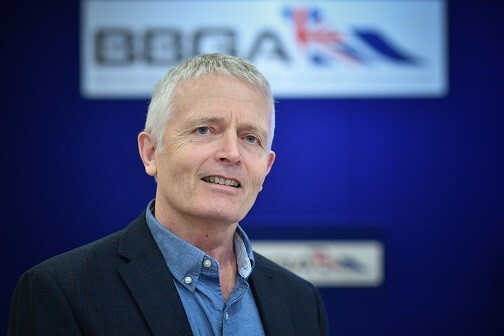 After securing an RAF flying scholarship aged 17, her journey took her from PPL, through University Air Squadron and the RAF’s flying training system to the front line, patrolling the No-Fly Zone over Iraq in the Tornado GR4.

Through highs and lows, Mandy’s remarkable story was a refreshing way to kick off a conference, especially significant during International Women’s Day week with several Stansted College students among the 140 delegates.

An early pioneer of air taxi services, out of Fairoaks Airport, UK, with one Beech Baron, to the global aviation services company it is today, Marwan is a highly respected and admired founding father of business aviation, with four decades of industry knowledge and experience.

Committed to getting more people into aviation

This year’s event tackled key industry issues and their impact on the UK.  Topics included the drive to sustainability, manpower and what BBGA is doing to get more people into aviation through its close association with the Aviation Skills Retention Platform (ASRP).  Providing an update since its formal launch a year ago, TRS Engagement Director Richard Smith highlighted 100-plus aviation companies have registered on the platform.  Over 8,000 vacancies have been advertised and over 1,000 candidates are working towards returning to careers in aviation.  Users have included BBGA member SaxonAir, as well as airlines and airports throughout the UK.  TRS is now hosting Talentview Aviation to attract the next generation of employees from schools, colleges and universities, he shared.

The conference covered how used aircraft are changing hands at inflated prices because of lack of inventory.  A session on Russia, which prior to the Ukraine invasion was business aviation’s 10th biggest market, was addressed in a lunch-time media session attended by the UK Civil Aviation Authority and several operators.

He summarised that education of all stakeholders on the use of availability is important and aviation needs to  “eat its greens.”

Air bp’s Laura Bowden stated that SAF, made from sustainable feedstocks and blended with traditional jet fuel, is certified as Jet A-1 and therefore safe to use as a drop-in fuel, responding to Hunt and Partner’s observation that people are still apprehensive about it – not just the higher cost.

SAF is not a lifestyle choice, rather its adoption a critical part of the journey to Jet Zero, we heard.

And where it’s not available, there are solutions like Book and Claim where the SAF is ‘booked’ in one location, but carbon reductions associated with it are claimed elsewhere.

As head of the BBGA’s new Sustainability Work Group, Hardie invited members to respond comprehensively to a survey which will determine what UK members are doing.  Leo Knappen, head of industry affairs at Bombardier, suggested a series of workshops to raise awareness.

Brian Humphries, BBGA Board Director suggested that Government might consider a discount on APD (for airline users) to incentivise adoption.

Richard Koe, Managing Director of WINGX, asked: “Is this the golden age for business aviation?”  “Industry metrics suggest we are seeing much improved signs of health, and in some cases record-breaking data, ranging from – business jet deliveries, much improved on 2020 and due to surpass 2019 in 2022, but still well behind 2008 with orderbooks still at their strongest in eight years.  Sentiment is at its highest ever,  pre-owned inventory is below 5% and overall aircraft activity is at its highest ever,” he highlighted.

The recovery in business jet flight activity is in stark contrast to scheduled airline activity. The former grew by 7% in 2021 compared with 2019, whilst the latter’s activity dropped 38%. More tellingly, business aviation, which already has a multiple-ratio advantage over scheduled in terms of unique connections, grew its connectivity by 5% in 2021, whilst unique scheduled connections dropped 20%. The embedded erosion in the range of choice for scheduled airline travellers is a key factor in the switch to business.

Within the business aviation market, 2021 saw a variable recovery across the fleet, with small and mid-size cabin aircraft doing much better than large cabin, and charter leading the recovery.  But even in the first two months of 2022, large cabin activity has caught up, and private activity, including corporate flight departments, have levelled and even surpassed pre-pandemic demand. The UK was a laggard in Europe during 2021 in terms of business jet demand, but activity has surged in 2022, with Farnborough seeing a strong rebound. London’s Biggin Hill and Oxford Airport have been notably resilient since the start of 2021, he noted.

Russia is now firmly “unplugged” from commercial aviation, Richard stated.  Pre Covid it had been one of the fastest recovering markets – both business and scheduled/commercial aviation in 2021 surpassed 2021 levels, and on the eve of the Ukraine invasion, business jet activity from Russia was trending up 25% in 2022 versus 2019. The direct impact of the war will almost certainly remove all Russian demand from the European business jet market, with reference to a 2021 benchmark of 7% of all European sectors connecting with Russia and Ukraine. (The largest cabin aircraft have the highest exposure: 28% of all Embraer Legacy 600 sectors in 2021 in Europe connected with Russia and Ukraine.)  Overall, the size of the globally active business jets controlled or owned by Russians is small, certainly less than 500, amid a globally active fleet of more than 20,000 business jets. “However, the war’s impact on the global economy, and the specific effect on investor confidence, does not augur well for the industry in the second half of 2022 and the golden age may prove to be a flash in the pan.”

A panel on the future of fixed-wing electric/hybrid-electric and eVTOL platforms was chaired by Mike Stones, Executive Editor at Corporate Jet Investor, fresh from CJI London 2022.  “Much of our industry has had a kicking, but Covid has given a boost to this side of the sector,” suggested Faradair founding CEO Neil Cloughley.  His offering, supported by partners including Honeywell and magniX, is the clean sheet BEHA 18-seat hybrid-electric triplane passenger and cargo utility aircraft.

Darrell Swanson, from Swanson Consulting, highlighted 47% of turboprop flights in Europe in 2017 were serving 200nm sectors – a ready marketplace for Joby, Vertical, Archer, Heart Aerospace and Faradair.  In a 2021 report, published by ADS Group, he identified 286 airport pairs, but only 43 of them had commercial operations.  “That’s just the low hanging fruit,” he said.

Ampaire is focusing on a less capital intense, practical model, centred on retrofitting – which also speeds up certification, said Ampaire Chief Engineer John Rees.  After successful hybrid-electric trials last summer with a modified Cessna 337 Skymaster, Ampaire UK is developing a hybrid Britten-Norman Islander, he said.  (The programme is called Outlander).  Its two existing engines are to be replaced by more efficient SAF powered engines which are joined by two electric motors driving additional propellers, for a 335nm range, affording a 50% reducing in fuel consumption and an 85% reduction in emissions.

Edwin Brenninkmeyer, CEO of Oriens Aviation, shared that Tecnam is partnering with Rolls-Royce on the P-Volt, an electric version of its 11-seat piston-engined P2012 Traveller. The aircraft’s range will be 45nm or 85nm without reserves (building up to 145nm in year 2030 when battery technology advances).  P-Volt already has a launch customer in Norway (regional airline Widerøe).

Engineering and infrastructure challenges apart, the panel agreed there should be firm progress on next-gen programmes by 2025.  It will also make smaller airfields much more relevant, with Swanson identifying a UK market of an initial 224 next gen hybrid aircraft (fixed wing and eVTOL).

Feeling the impact of Russian sanctions

A media session introduced by The Emerald Network and focused on the Russia/Ukraine conflict, highlighted KYC – know your customer – and the need for careful due diligence.  “Rigorous KYC has always been a requirement under anti-money laundering legislation – if a lawyer or a financier does not know their client then they are not complying with the law and can be held personally accountable. The Russian sanctions regime highlights the need for these processes and procedures and why they are so important,” Aoife O’Sullivan, Partner, Air Law Firm and BBGA Chair said.

Gama Aviation Group CEO Marwan Khalek commented that with aircraft being grounded there are concerns around an operator’s ability to continue servicing them.  Some registries are moving fast to deregister aircraft.  “That’s not necessarily the right tactic, he said.  “We need to be systematic. Aircraft need to be preserved.”

David Kendrick, Head of Licensing at the UK CAA, agreed.  “Things are moving at pace [with the sanctions regime].  The intent is to prevent Russian nationals operating and buying anywhere.” However, he underlined, “We don’t want to see aircraft being left in bits.” George Galanopoulos, Chairman, Luxaviation UK, added: “If asked by DfT to ground any Russian aircraft – how do we know if they’re Russian owned, we’re not MI6.”

Matthew Borie, Chief Intelligence Officer, Osprey Flight Solutions, highlighted that continued lack of access to Russian airspace is adding 1.5 hours to routes from Europe to Beijing, two hours to Tokyo and three hours on Polar routes.  It will also add to fuelling costs and additional requirements for crew rest and planning, as well as concern for flying over conflict zones.

UK as a preferred closing location of choice

With aviation brokers experiencing a frenzied time the likes of which has not been seen since 2007, BBGA welcomed the top four on stage – Steve Varsano, CEO, The Jet Business; Alireza Ittihadieh, CEO, Freestream Aviation; Sean O’Leary, Sales Director, JetCraft; and Oliver Stone, Managing Director, Colibri Aircraft.  Among discussion points including elevating the UK as a preferred closing location of choice.

“We want to be as good as the Isle of Man Registry,” said Aoife O’Sullivan, pointing to our stellar MROs and BBGA members.  “Securing maintenance slots for pre-buy inspections is a big issue and the shortage of inventory brings crazy demand, with new customers buying without inspections.”  “First-time buyers need to be educated about the true value of ownership or their jets will be back on the market after a short time,” warned Steve Varsano.

Oliver Stone noted there were 43 Citation CJ3s on the market a year ago – now there’s just one for sale.  Six- to eight-year-old aircraft in good condition have seen values up 20%.  In the bigger cabin category, there isn’t anything available and the average backlog for new jets is 18 months.

The closing remarks on Russia fell to the brokers.  “If a business jet is financed and repossessed by a Western bank you can buy it.  If it isn’t, it’s a criminal offence,” said Alireza. “The banks are swiftly repossessing,” he concluded, disclosing that one bank took back 12 aircraft on the day of the conference.

“It was fantastic to see everyone back at a real conference with the BBGA in what turned out to be a busy week for industry events,” said BBGA CEO Marc Bailey.  “I was very pleased with the attendance from our industry colleagues and our sponsors who went above and beyond our expectations given the difficulties our industry is facing.  We have a series of important projects underway for 2022 and it’s vital we keep our sector fully engaged with Government and its agencies. Membership participation is important to make these projects a success,” he concluded.