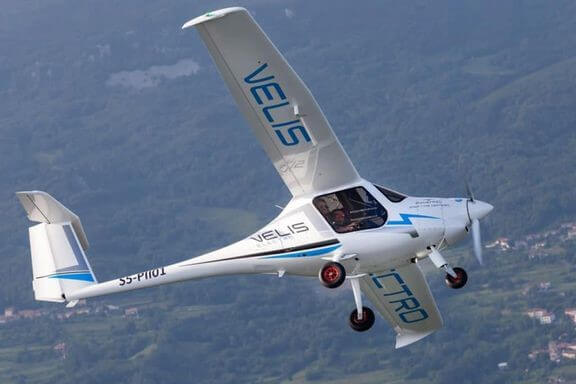 In 2019, Avinor and NLF’s electric plane, LN-ELA, had to make an emergency landing during a demonstration flight. Now an order has been placed for a new electric aircraft which constitutes an important part of the commitment to the electrification of aviation.

In 2017, Avinor and the Norwegian Association of Air Sports (NLF) acquired a Pipistrel Alpha Electro type electric aircraft. This was the first electric plane in Norway, and was used in a series of demonstration flights. The first official flight departed Oslo Airport on 1 June 2018 with the Minister of Transport and Communications at the time, Ketil Solvik-Olsen, one of the passengers on board along with Avinor’s CEO, Dag Falk-Petersen, who served as pilot.

During the Arendal Week political festival last year, the engine failed during a flight, and Avinor’s CEO Dag Falk-Petersen, who was piloting the aircraft, had to undertake an emergency landing in a pond without sustaining any personal injury. The cause of the engine failure remains unknown, but the insurance claim has been finalised. Together with NLF, Avinor has bought a new Pipistrel Velis Electro type aircraft.

‘It is difficult to imagine a world without aviation, but we have to reduce our greenhouse gas emissions. Avinor is working proactively together with other operators in the aviation industry on zero- and low-emission solutions, and the Covid-19 pandemic hasn’t changed this,’ says Avinor CEO Dag Falk-Petersen.

In January, Avinor and NLF received a quote for the repair costs of the crashed aircraft. The report notes that the fuselage is almost undamaged and can be reused, but that all other components must be replaced due to the plane being submerged in water. The repair costs are similar to the cost of acquiring a new aircraft of the same type. Thousands of flying hours with electric aircraft have been logged in recent years. Avinor and NLF discussed a range of options and agreed to acquire a new electric aircraft.

‘The aircraft we are buying is a further development on LN-ELA. It’s certified by EASE, which means it can be used for things like pilot training. This highlights that the development of electrified aircraft is moving forward,’ says John Eirik Laupsa, Secretary-General of the Norwegian Association of Air Sports.

The aircraft that has been ordered is Pipistrel’s new EASA certified model the Velis Electro 600. This aircraft is roughly the same size as the previous type, and the performance is comparable. The aircraft has two seats, a range of one hour, and a battery capacity of 24.8 kWh. The aircraft has a list price of approximately NOK 1.7 million. The vast majority of this cost is being covered by insurers.

The old electric aircraft is to be donated to the Norwegian Aviation Museum in Bodø.

Avinor CEO Dag Falk-Petersen believes that Norway is particularly suited to being a pioneer in the pursuit of more sustainable aviation.

‘We have a network of short runway airports where electrified aircraft can play an important role. Avinor will ensure that the infrastructure is in place – whether this is to enable battery recharging or the provision of hydrogen for fuel cells. We have great faith in the fact that the aviation industry of the future will be emissions free,’ says Falk-Petersen.

The aircraft will be delivered in May 2021 and will be based in Oslo. ‘We looked forward to its maiden flight in the early summer of 2021,’ Dag Falk-Petersen and John Eirik Laupsa conclude.