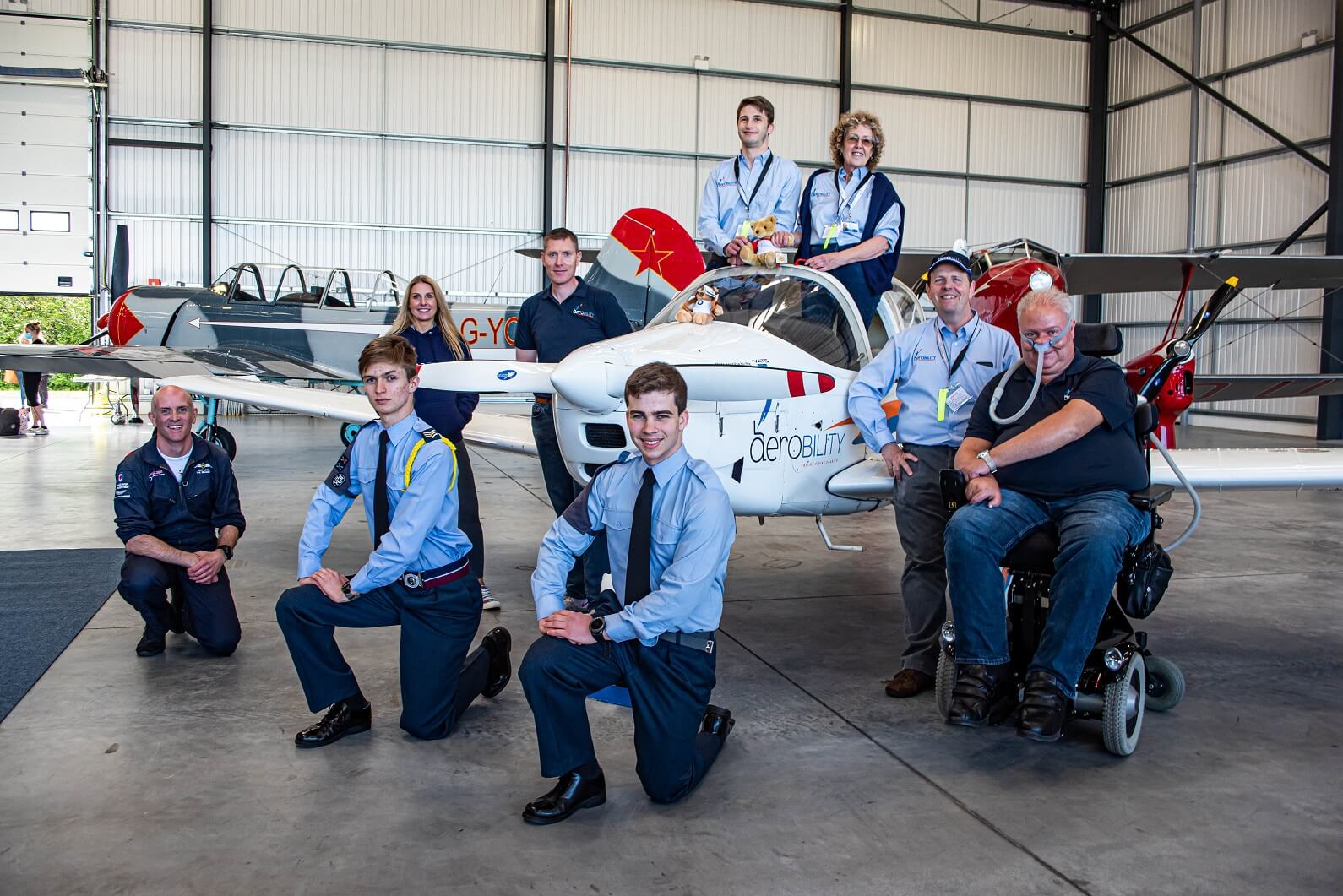 All the money raised will go towards the Armchair Airshow Flying Scholarship, which enables hundreds of life-changing flights for anyone with a disability.

“This is a brilliant achievement,” commented CEO Mike Miller Smith thanking London Biggin Hill Airport for their generosity in hosting, sponsors and all the many helpers who came together to make the event such a great success.

Fundraising is so important, helping students like Sophie Reilly. Sophie is registered blind and a wheelchair user.

She was able to complete an experience flight live during the show, showcasing the work of Aerobility, after months of shielding, in a stand out back to the sky moment.

To date the Airshow, featuring live and pre-recorded interviews and flights has been watched by over 30,000 viewers across Youtube and Facebook all over the world, further raising awareness for the inspirational charity.

Alongside the show and live fundraising auction took place with bidders tussling for the 44 listed items generously donated by supporters included a Spitfire flight courtesy of FlyaSpitfire.com, a private jet experience to Newquay from Air Charter Scotland with partners Zepiair and Jet Agent and a rare signed model of a MiG-29, signed by Russian test pilot Anatoly Kvotchur.

Aviation journalist Paul Eden was among the guests:

“Since the UK went into its first period of Covid lockdown in March last year, the aviation industry has proven its resilience and adaptability in the face of unprecedented challenge,” UK Secretary of State for Transport, The Rt Hon Grant Shapps sent his own pre-recorded message supporting.

“Yet Aerobility CEO Mike Miller-Smith and his incredible team revealed another side of flying, where people coping with serious challenges in their everyday lives have found personal resilience, freedom and a new future through aviation.

“Their extraordinary example was a fitting backdrop to a day of amazing inspiration and aerial entertainment”.

UK Secretary of State for Transport, The Rt Hon Grant Shapps sent his own pre-recorded message supporting the day: “The UK Airshow Calendar has been much disrupted this past year, but it takes more than a pandemic to discourage the team at Aerobility.

“For the second year in succession they have done an incredible job to put on the Armchair Airshow and they deserve massive credit, supported by Biggin Hill Airport, with another opportunity to raise thousands of pounds to help more disabled people experience the joy of flying and aircraft for themselves”.

“When you have a disability that restricts you in your daily life flying a plane can be hugely liberating and empowering.

“As the only UK charity offering this, I know there is a big waiting list for Aerobility flights.

“This is why I was so very pleased when as Chair of the APPG for General Aviation, we lobbied the MoD and authorities to put hangared aircraft back in the air, providing a charitable DfT grant to refurbish a fleet of T1 Vigilant gliders formerly used by RAF Cadets to increase Aerobility’s capability.

(Working with partners Grob Aircraft SE in Germany, CFS Aero/Rotax, Garmin, the plan calls for Aerobility to refurbish the aircraft, extending its capability and geographic reach, reaching more disabled people throughout the UK, and through sales of the remaining aircraft – raise funds for the charity to support operations into the future.)

“Some 1,600 more disabled people a year will be able to enjoy the transformational benefits of flying through ‘Project Able’, joining the 1,000 plus who are already supported by Aerobility.”