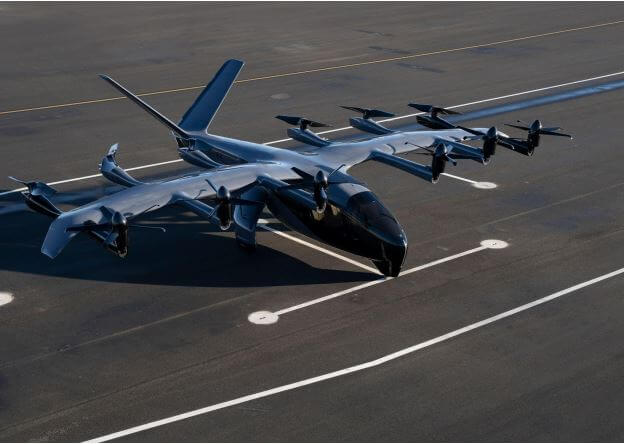 Midnight is the evolution of Archer’s demonstrator electric vertical take off and landing (eVTOL) aircraft, Maker, which has validated its proprietary 12 tilt 6 configuration and key enabling technologies.
● Midnight is designed to be safe, sustainable, quiet and carry four passengers plus a pilot.
● Midnight will have an expected payload of over 1,000 pounds and be optimized for back-to-back 20-mile trips, with a charging time of approximately 10 minutes in-between
● Archer is working to certify Midnight with the FAA in late 2024 and will then use it as part of its urban air mobility (UAM) network, which Archer plans to launch in 2025.
● Archer unveiled Midnight at its Open House event, which provided further details on the aircraft’s specifications and capabilities, including its proprietary electric powertrain system.

Midnight is designed to be safe, sustainable, quiet and, with its expected payload of over 1,000 pounds, can carry four passengers plus a pilot. Midnight is optimized for back-to-back short distance trips of around 20-miles, with a charging time of approximately 10 minutes in-between.
Archer is working to certify Midnight with the FAA in late-2024 and will then use it as part of its UAM network, which it plans to launch in 2025.

“From day one Archer’s strategy has always been about finding the most efficient path to commercializing eVTOL aircraft,” said Adam Goldstein, Archer’s Founder and CEO. “We believe our strategy and team’s ability to execute on it has allowed us to establish our leadership position in the market, and is why we are confident we will be the first company to certify an eVTOL aircraft in the US with the FAA.”

Archer’s unique approach to designing Midnight focuses on combining high function and high emotion, inspiring passengers to want to experience it, similar to the feeling that was evoked in this country during the Golden Age of aviation in the 1950s. Archer is confident that Midnight will lead the way in this new era of vertical flight. Midnight marries cutting-edge electric propulsion technology with state-of-the-art aircraft systems to deliver the key attributes of our eVTOL aircraft:

● Safety. High redundancy and simplified propulsion systems make for a significantly safer aircraft compared to a helicopter. Midnight has no single critical points of failure, meaning that should any single component fail, the aircraft can still safely complete its flight. In addition, the electric motors used in Midnight have significantly less moving parts than those found in a gas turbine or piston engine, allowing it to operate with less maintenance and lower overall risk.

● Low noise. Designed to cruise at approximately 2,000 feet, the design of Midnight is such that the noise that reaches the ground is expected to measure around 45 A-weighted decibels (dBA), almost 1,000 times quieter than that of a helicopter. During forward flight, the aircraft’s tilt propellers spin on axes that are aligned with the oncoming air flow, rather than edge-wise to the flow, as is the case with traditional helicopters – further decreasing noise levels. Since Archer’s aircraft is spinning 12 small propellers rather than one large rotor, it can also spin them at significantly lower tip speeds, resulting in much lower noise levels.

● Sustainable. Midnight is all electric, resulting in zero operating emissions. Archer is committed to sourcing renewable energy wherever possible to power its aircraft. Archer’s design and engineering teams have worked tirelessly to integrate materials into this aircraft that have their own unique sustainability stories. For example, Midnight’s seats are constructed out of “flax” fiber, a natural plant which requires very little irrigation and is highly absorbent of CO2. In addition, Archer’s design uses fabric made from recycled contents like plastic bottles.

“We continue the push towards commercialization, with the vast majority of our resources focused on completing the development and certification of Midnight, building out our manufacturing and supply chain capabilities and hardening our go-to-market plans.” said Mark
Mesler, Archer’s CFO.

In August, Archer completed Midnight’s preliminary design review covering all aspects of the aircraft’s specifications and manufacturing requirements, which enabled it to determine that the design is feasible for Type Certification and commercialization.

Archer has also made rapid progress on Maker’s flight testing program and is on schedule to complete a full transition flight in the coming weeks, just twelve months after its first hover flight. Achieving this milestone will further validate the flight physics of Archer’sproprietary twelve-tilt-six configuration that it uses on both Maker and Midnight, as well as a number of the key enabling technologies, such as the aircraft flight control system. The Maker flight test program has generated invaluable data that Archer has leveraged in the development and certification path of Midnight.