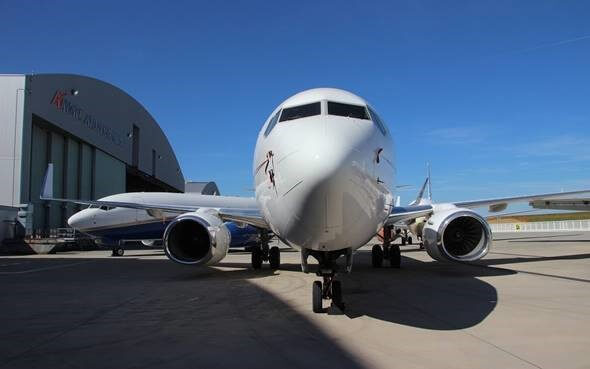 AMAC Aerospace is pleased to announce to have been awarded with several new maintenance projects in Basel, Switzerland, and a successful re-delivery of a Boeing BBJ 737 on time. A Head of State Gulfstream GV has arrived at AMAC for an annual inspection. In addition, a privately-owned Airbus ACJ 319 will arrive in April in Basel and will get installed a Ka-Band antenna.

AMAC Aerospace signed a new contract for a privately-owned Airbus ACJ 318. The ACJ 318 will arrive at AMAC in March and will undergo a 1A-, 2A-, 1C-, 2C- and 4C-check in Basel. An Airbus ACJ 319 will enter AMAC’s hangar beginning of March to undergo a 6-year-check. In conjunction AMAC Aerospace will install a Ka-Band with an already existing ‘STC’ (Supplemental Type Certificate), which has already been used for many other Airbus ACJ 319 aircraft.

AMAC has welcomed a Gulfstream GV mid-January. The Head of State Gulfstream GV has undergone an annual inspection. In addition to that, AMAC will welcome a privately-owned Airbus ACJ 319 in Basel in April. AMAC Aerospace’s skilled technicians will install a Ka-Band antenna.

AMAC Aerospace recently accomplished a 6-month-check on a Boeing BBJ 737. The privately-owned aircraft arrived on short notice and has already been released on time last week. A Boeing BBJ 737 is currently in AMAC’s hangar in Basel to undergo a C2-check. In parallel, AMAC will perform a 96-month-check on the BBJ aircraft.

A privately-owned Boeing BBJ 737 is shortly expected at AMAC; a 1A- and 2A-check in conjunction with an ‘OOP’ (Out Of Phase) task will be performed.

AMAC Aerospace was also awarded with a new maintenance project on a Gulfstream aircraft: A privately-owned G550 has entered AMAC’s hangar at the beginning of February. AMAC will carry out a 1C-, 2C-, 3C-, 6C- and 72-month-check on the aircraft.

Furthermore, AMAC is happy having received the ISO 45001-2018 certificate. By certifying this ISO standard, AMAC Aerospace ensures that health protection becomes an integral part of the company culture. The well-being of AMAC’s employees is of high importance to the company organization and to the people working for the company.