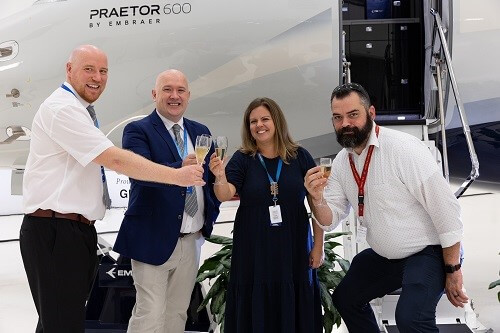 The accreditation is a culmination of 18 months’ work started just before the UK’s departure from the EU.

Stephen Pollock, Continued Airworthiness Manager – Europe, is looking after the European side of the operation, based out of Malta and sub-contracting out to the UK team.

With expanded CAMO approval in the UK and Europe Air Charter Scotland can liaise with regulators for an aircraft owner, appraise aircraft manuals, address airworthiness directives/service bulletins and support maintenance with preferred MRO companies, as well as perform on site surveys and audits.

“This means we can do much more activity inhouse, expanding our managed charter fleet with wider expertise, including offering technical services in the UK and Europe to third party operators and to owners,” commented Richard Rooney.

“We can ensure that every aircraft we manage for them is compliant with full safety standards.”

“This is significant as we add more aircraft owners. They have peace of mind we are fully conversant with the flux in regulations supporting both the UK and European markets.”

ACS supported the transfer of a UK-registered Embraer Phenom 300 onto the 9H Maltese aircraft registry.

As a G-registry operator, it supported Elit’Avia with the process of achieving an export certificate of airworthiness, assisting with communications between the UK Civil Aviation Authority and Transport Malta.

COO Iain Houseman approached Air Charter Scotland COO Derek Thomson to assist with the process of full research on the aircraft’s records, including inspection and preparation for commercial operations.

The goal was achieved inside three weeks, concluding a very complex administrative situation.

“We are delighted to have this widened CAMO capability,” said COO Derek Thomson.

“Congratulations to Richard, Stephen and their team for all their hard work.